A love letter to our catchment basins 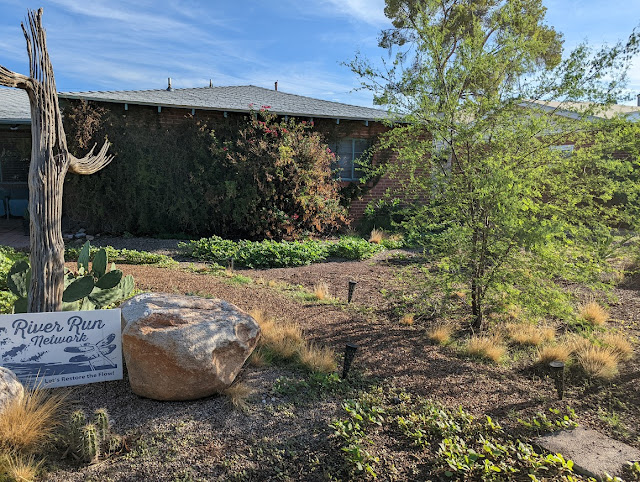 If you have been following our blog lately, you know how thrilled we were to finally get our last two cisterns installed.  (You did it, baby!) 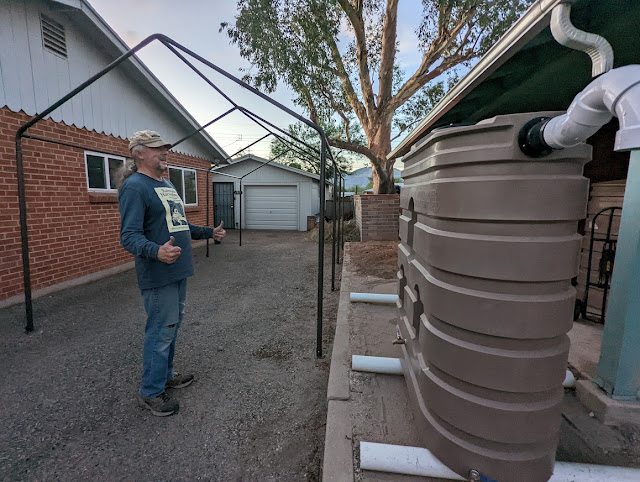 We really needed that harvested rainwater for our thirsty garden this summer as our plants suffered from record heat.  I was feeling guilty for giving them so much water as our main water source, the Colorado River, is drying up due to the extreme drought.

But now that we've had some rain,  I am really appreciating the beauty and ease of our catchment basins.  During the first big storm even the biggest cisterns filled up, so I needed to figure out how to use up some of the water in order to leave room for the next downpour.  Our hummingbird trumpets (that get the overflow) had MORE than enough water, so I wanted to spread the wealth. 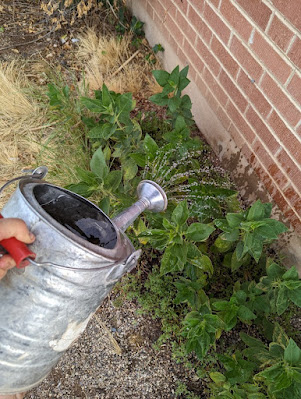 Meanwhile, I watched in wonder as our catchment basins kept sinking in water.  Rainwater harvesting Guru Brad Lancaster said that a catchment basin can actually store more water than the big cisterns. The cisterns fill up and that is it. But the catchment basin keeps sinking in water. The roots of the native plants and grasses help the water sink in. Those so-called "weeds" help prevent erosion, and keep the woodchip mulch in place to create a sponge to hold the water longer.  That moisture also feeds the microbes in the soil. What a joy it is to see mycelium under the mulch and the resulting mushrooms! The birds love our yard! We like to think of it as an edible food forest for us and the birds.

Dan has designed our system so the overflow from the cisterns flows into a basin or somewhere where that water can be used. He transformed our front yard into a rain garden.  Every time it rains, we rush outside to see how well the system works! 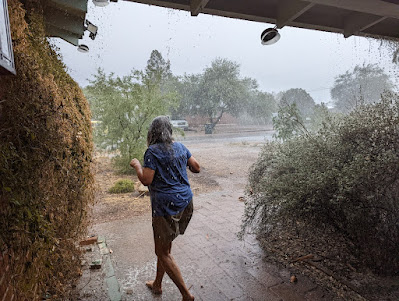 My favorite is the jujube basin. We already had gutters and a downspout that directed the rainwater where we wanted the basin. That was the easy part.  But it was quite the effort to get the roots of the aging oleanders removed. Dan planted the three jujube trees up on mounds and dug a basin along the side of the three trees. Then he filled the basin with mulch (that has long since decomposed into nice soil.) We got so much water there during a big storm that it actually washed some of the mulch into the street until we got some volunteer native grasses, horse purslane and wild flowers to catch them. They act as a living mulch. And when the horse purslane died it became straw-like mulch that keeps the moisture in longer. During the winter, I only had to deep water them once a month (or longer.)  During the recent heatwave, it was every two or three weeks. I haven't had to water them at all during monsoon season. And they are flourishing and growing lots of fruit. 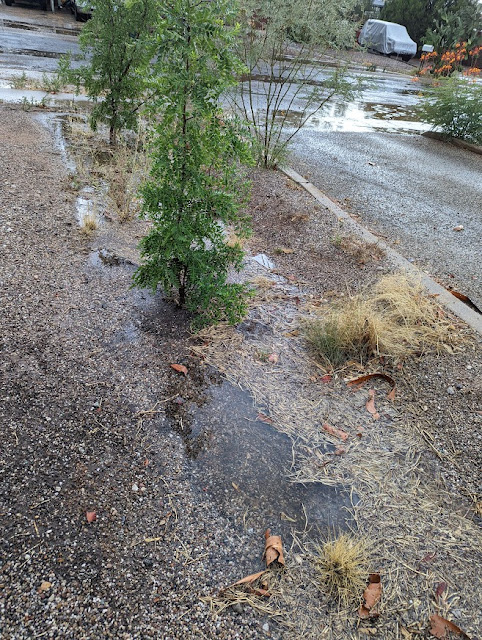 Now much of the front yard is covered with basins.  It didn't happen overnight.  It was a process.  Here's a little history of that process...

First Dan dug a basin in our right-of-way leaving mounds with five gallon holes in them so we could plant a wolfberry and four moringa trees. At the time, the right of way was completely covered with deep-rooted invasive  Bermuda grass. It was quite a struggle to get it out. (It was even growing under the sidewalk.) Dan conducted a "percolation test" to make sure the water would sink in within twelve hours. Then Dan filled the completed basin with organic wood chip mulch and native grasses. 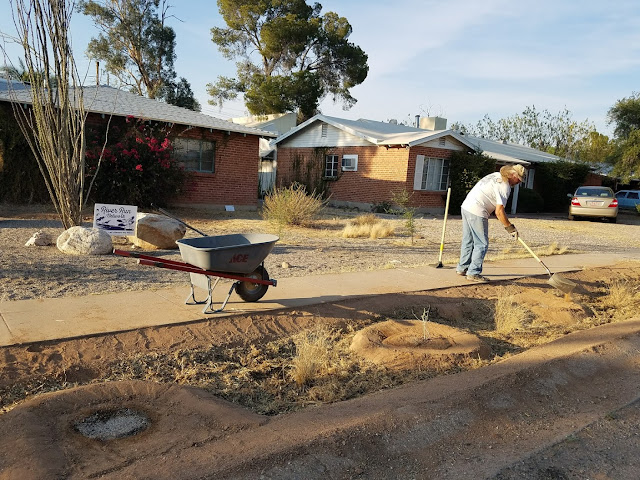 We planted moringa seeds in June so they would be established by the time the monsoons started.  We were amazed how huge the moringa grew in just one season! (Those moringas have quite a story of their own that you can follow by clicking on the link in the label column to the right.)

Next Dan dug out at least two feet of gravel and the plastic under it. It was funny... when he pulled out a big sheet of plastic underneath it we found Bermuda grass roots creating a design that resembled children's yard art!

It must have been covered up for years just waiting for a crack in the plastic to break through!  Dan took some of the gravel and built up a small berm to keep the roof water from the foundation of the house. It gradually sloped down into a basin that he filled with woodchip mulch.  On the high ends he planted native trees. Near the mesquite tree he put a hackberry bush to take advantage of the nitrogen that the mesquite fixed in the ground. (Dan loves that mesquite tree! He likes to call it his "Charlie Brown" tree because it was a scrawny project reject from WMG. ) Now that mesquite and the hackberry are thriving in our catchment basin!

Through the years the woodchip mulch has decomposed and turned into fine soil.  We really need to get some more... But after last year's monsoon, the whole basin filled with horse purslane - that acted as a living mulch! The bees and butterflies just loved it!  I pulled it away from the pathway and sidewalk so it looked intentional. I actually got compliments on our weeds!  When it died at the end of the season, I broke it into straw-like mulch.

It keeps the moisture in nicely! It is starting to breakdown too, so I'm happy that new purslane is popping up to take its place! (See photo below.) Who says Tucson doesn't have good soil?! You just need organic matter and water!

We don't like to play favorites, but I gotta say that our catchment basins are my favorite rainwater harvesting feature.  All they take is a little sweat equity, native grasses and mulch!  Like Brad Lancaster is fond of saying, "Love it!" 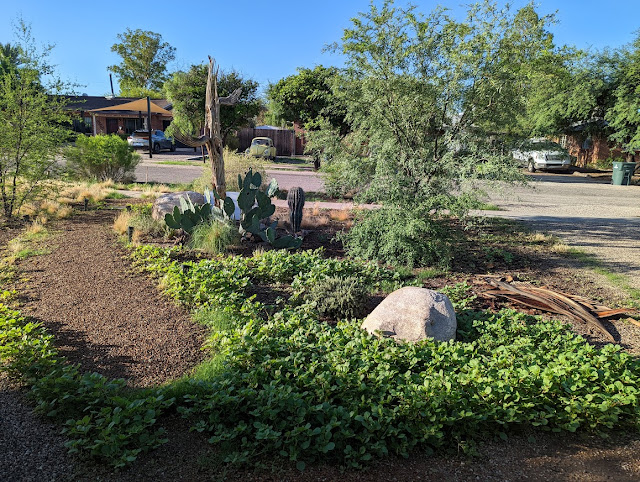