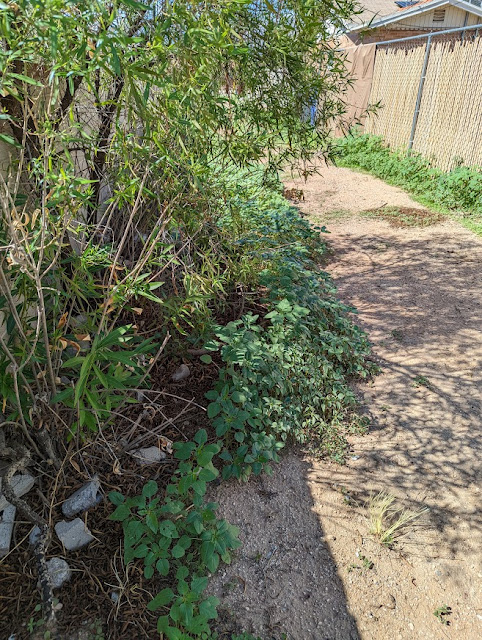 With all this rain, we are getting a lot of so-called "weeds." A weed being any volunteer plant that we don't want in our yard. But before you start pulling out all of  your weeds willy-nilly, I thought I'd do a blog on which are the good weeds and which are the bad weeds (in my opinion.) The good weeds include edible weeds, wild flowers and native grasses. The bad weeds include buffelgrass and sticker weeds like goat heads and tumbleweeds . I'll show you how to identify both. If you've read my posts, you're probably aware that I'm an advocate for pulling the weeds where you don't want them and leaving them where you do.

Should I start with good weeds or bad weeds?  I think we could all use some good news, so...

These native wild flowers (that some people might pull as weeds) aren't only beautiful by they slow down the flow in my jujube basin so the water sinks in instead of running out to the street. And the butterflies and bees love them!

The native wild flowers in our catchment basin slow down the stormwater (along with that native grass that is part of the system) to sink in the water and protect the trees. 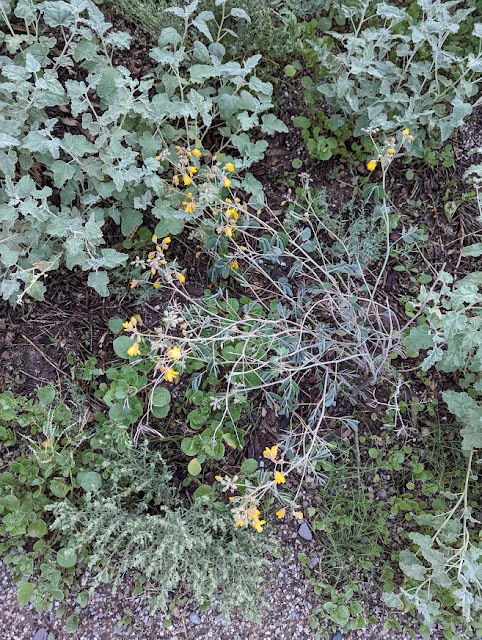 This volunteer globe mallow is a nice addition to my cactus garden... 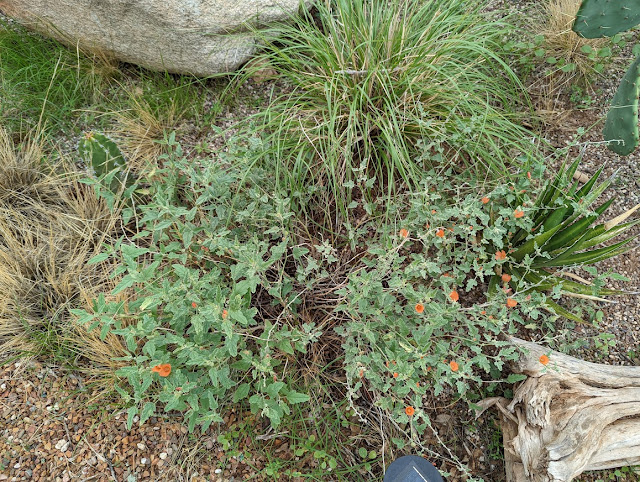 Here's an Arizona Poppy coming up in the place that I transplanted one last year. 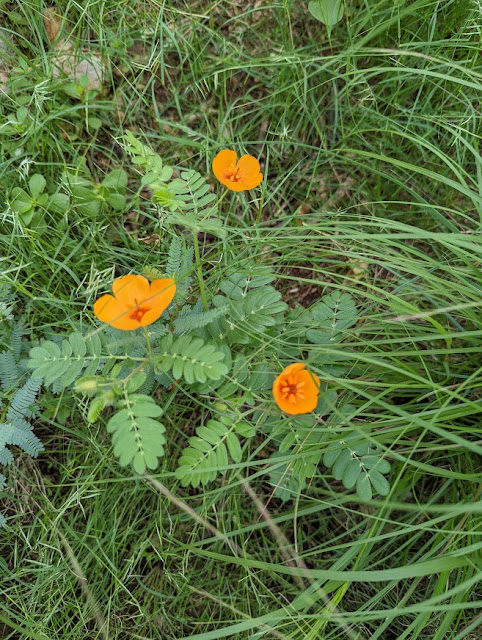 I'm really loving the abundant weed that is covering my front yard basin. I use horse purslane as living mulch. And then break it up into straw-like mulch when it dies! It also has pretty purple flowers that the pollinators just love. And yeah, it is also edible, but not as palatable as my favorite edible weed common purslane (see below.) I would cook it. 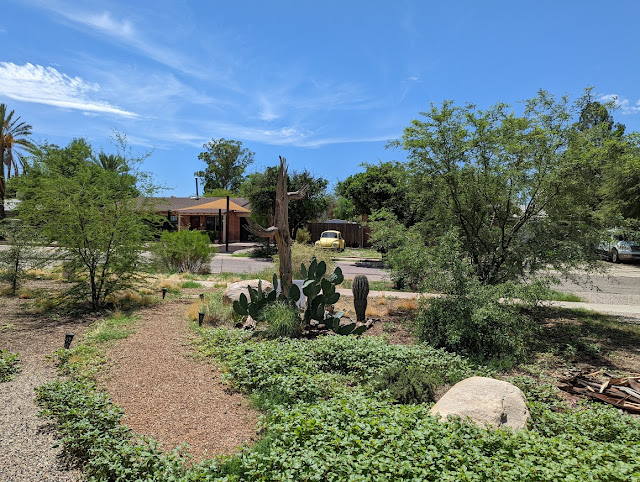 Here I am walking on the horse purslane mulch left over from last year. It's like walking on a wet sponge!  Now there are mushrooms growing there too - a sign of microbes in the soil!  Who says you can't have good soil in the desert!? You just need native plants and rain! 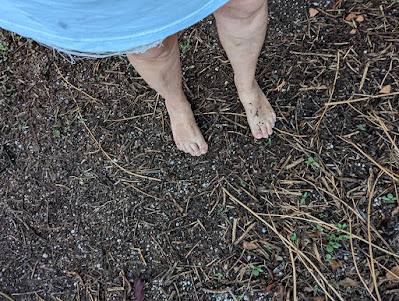 That brings me to common purslane (also known as verdolagas.) I have waxed poetic in the past about my love for this yummy edible weed and have posted many a blog with recipes. It sorta looks like a succulent with light green or pink stems (that are also edible.)

I guess you can't really call it a weed since I propagate it in my yard (like this patch below.) Check out the cute yellow flowers - that means they have gone to seed. Perfect for planting. I actually wash them off over a bowl to catch the little black seeds. Then I pour them where I know they will be watered - like in the catchment basin shown in the picture below. 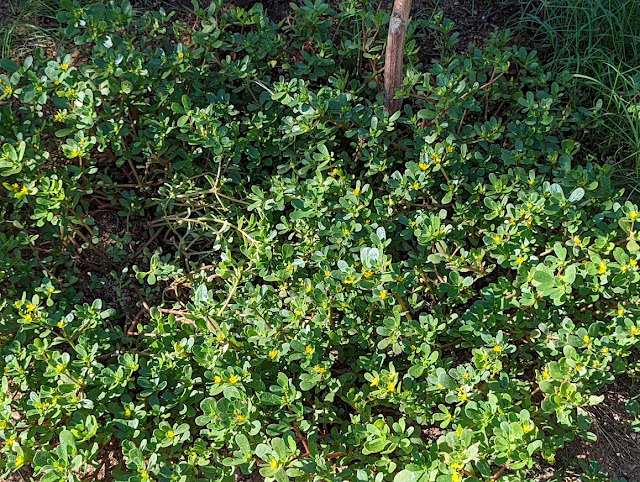 This should not be confused with spurge, that is probably growing right under it.  You can tell spurge because white sap comes out if you break the stem. And I think it looks completely different. 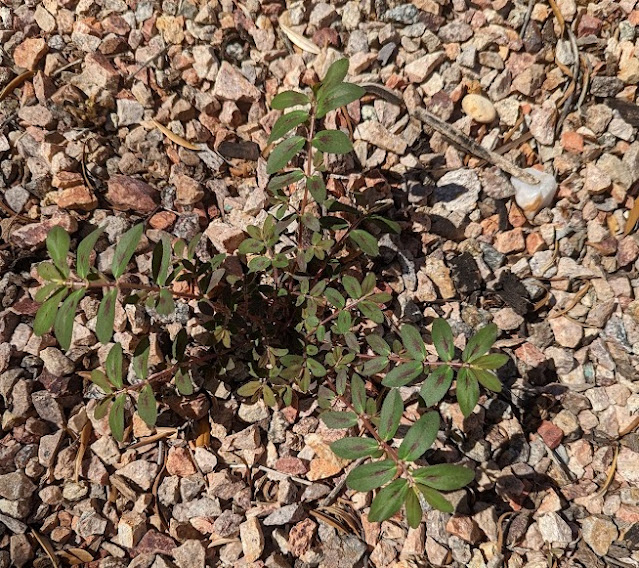 Also not to be confused with the dreaded goat head... Don't let the yellow flowers fool you! They turn into nasty stickers. Here's a clear picture I got from a Master Gardeners class. 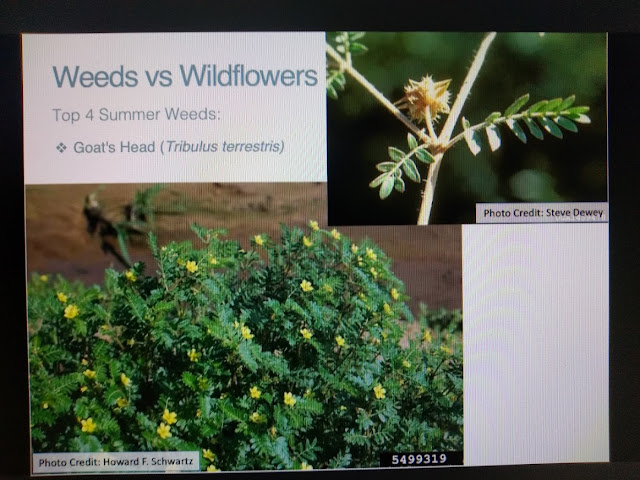 You won't want to wait until the sneaky yellow flowers appear to pull them out because you may get pricked by a hidden sticker.
Hey! How did the nasty sticker weeds creep into my good weed section? I'm not done with the good edible weeds!
We finally got some amaranth in our easement. Yay!  (See pic at the top of the page.) 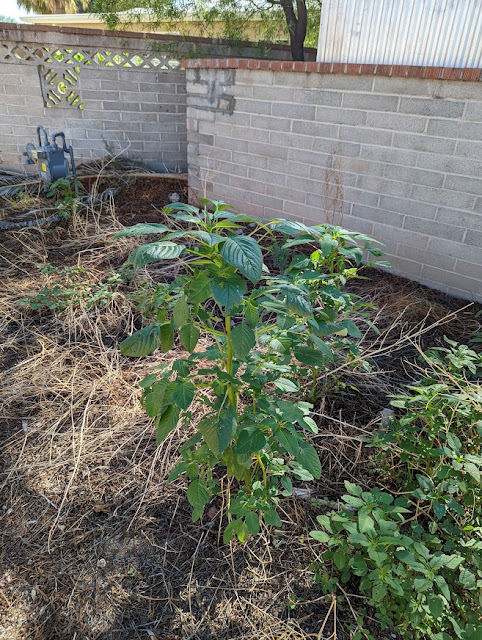 While I was out and about I decided to pull some palo verde sprouts to help out our neighbor.  While those aren't traditionally thought of as weeds, by my definition weeds are plants you don't want. And I'm pretty sure they don't want a palo verde forest in their yard.  And I benefited too. Palo verde sprouts are delicious (like their edible seeds.) The neighbors liked them too! 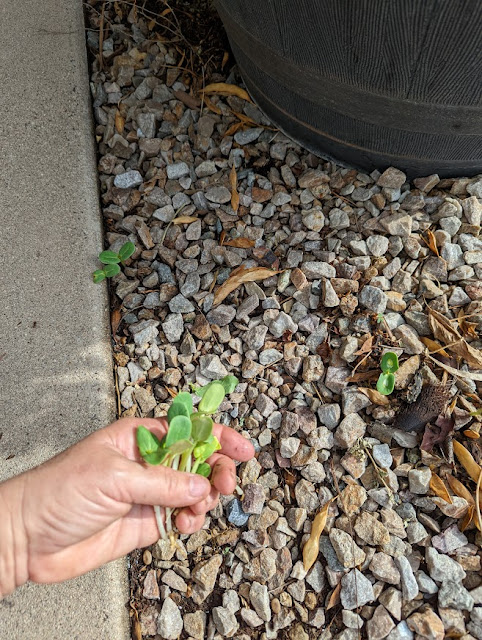 I grabbed some amaranth for supper.... 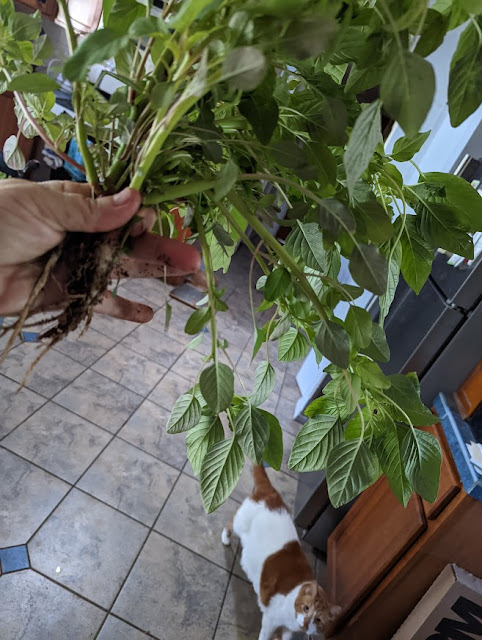 First, I pulled the leaves off the stem and washed a big bowl of them thoroughly. It's important to pick quite a bit because they shrink when you cook them like spinach.  Then I sautéed them with onions and mushrooms.  Great earthy flavors! 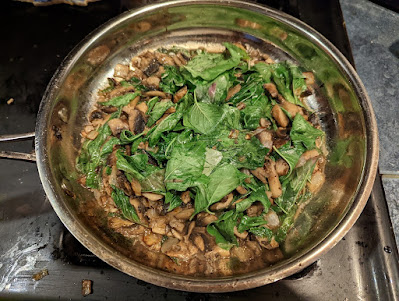 We love this in a egg scramble, but this time we tried something new!  Amaranth and mushroom enchiladas!  Amaranth is Dan's favorite!  Looks like Freddie wants some too! 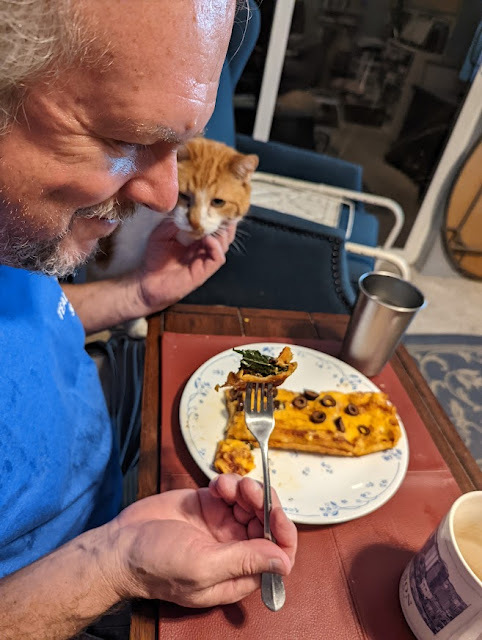 Now for the bad weeds that are popping up after all that rain.
I kinda went on a quest to get rid of all the sticker weeds in the neighborhood.
Hiding in the grass, was an innocent looking weed with purple flowers...and stickers!
Can you spot it? 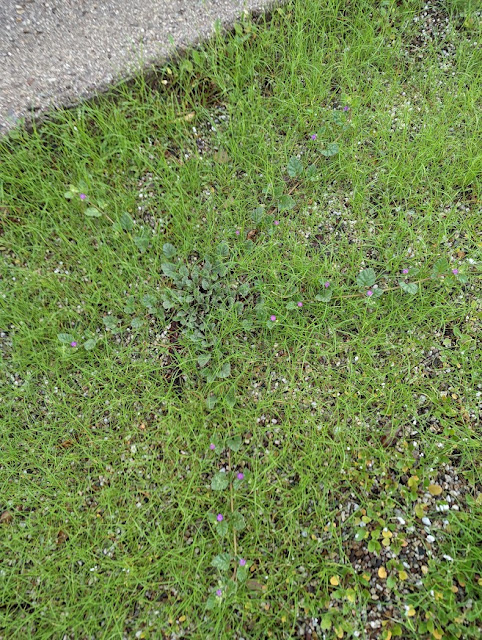 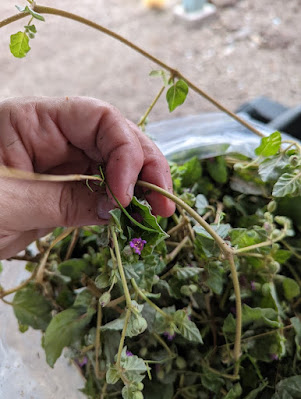 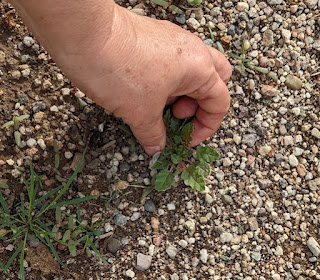 I'll grab this little goat head while I'm at it. 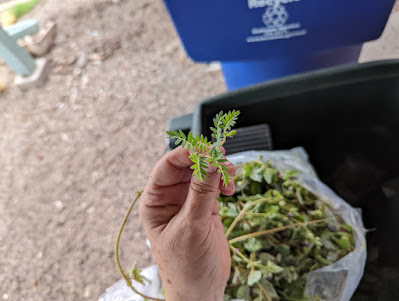 There were a bunch of tumbleweeds that were spreading from one yard into the two yards next to it. I pulled those too! 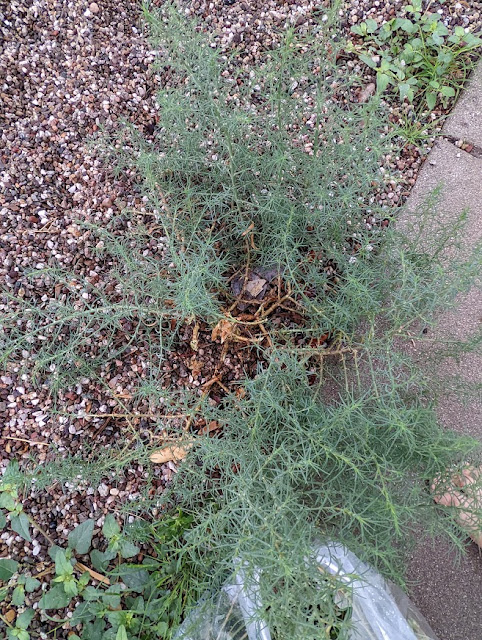 I put them in re-used plastic bags to keep the seeds from flying down the street when the garbage truck picks them up. A good morning's work, if I do say so myself! 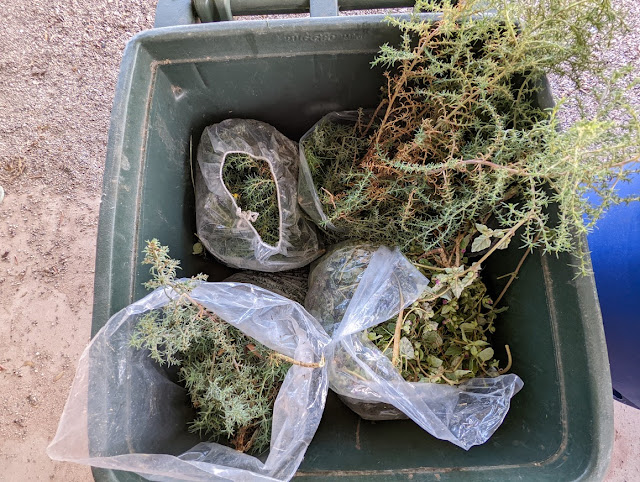 And don't forget buffel grass. You don't want that growing in your neighborhood. It spreads like wild fire and burns as hot. It's pretty easy to pull when they are little. You can identify it because it grows out from the middle and often has burgundy tips. 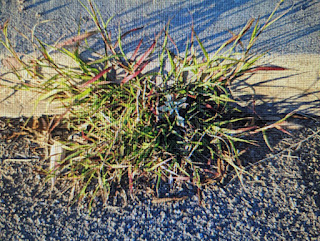 But once they go to seed, you'll want to carefully pick off the seeds first and put them in a sealed bag. Then try to pull them out by the roots using a shovel. It's easiest after it has rained for a few days. Then put the whole plant into a sealed plastic bag so the seeds won't spread when the garbage truck picks them up. The buffel grass pictured below spread through the whole lot then down the street and through the neighborhood. Now, when I can't get them out, at least I remove the seeds. 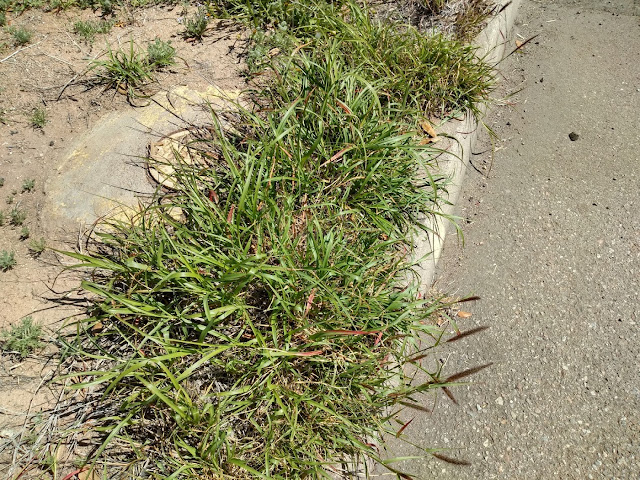 Here's a pic of some baby buffelgrass.  I'm afraid it looks an awful like some other grasses. But a big buffelgrass with seeds nearby is a good clue. 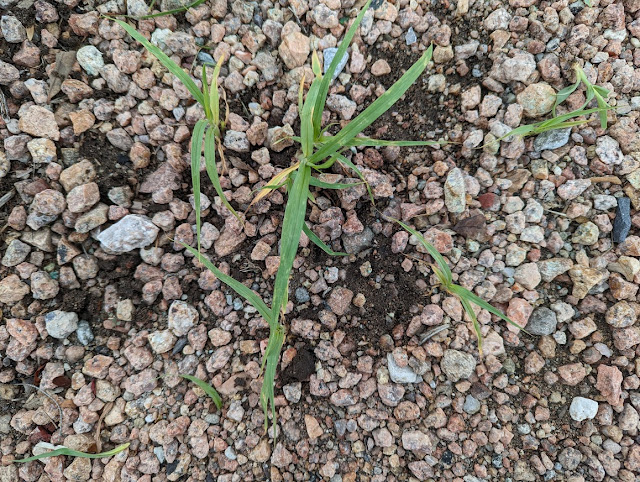 Weeds are in the eye of the beholder. In the 80s many people planted Bermuda grass - that is now considered an invasive plant. (Which you are well aware of if you've ever tried to remove it. It sends out seeds and runners and has a deep root system....)

To keep it under control, you can cut it back before it goes to seed. I use the grass clippings from my neighbor's yard on my compost pit! 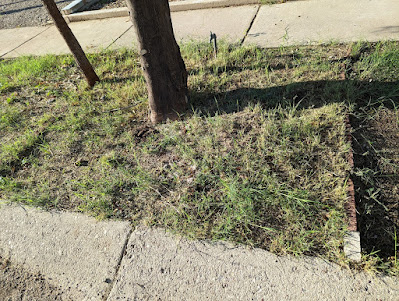 But I purposely plant native bunchgrass in our yard to prevent erosion (like around the base of the curry plant below.). It's an integral part of our catchment basins - allowing the rainwater to sink in and acting as a sponge (along with woodchip mulch) to hold the water longer.  (I have been known to give it a hair cut to keep the seeds from spreading too much.) 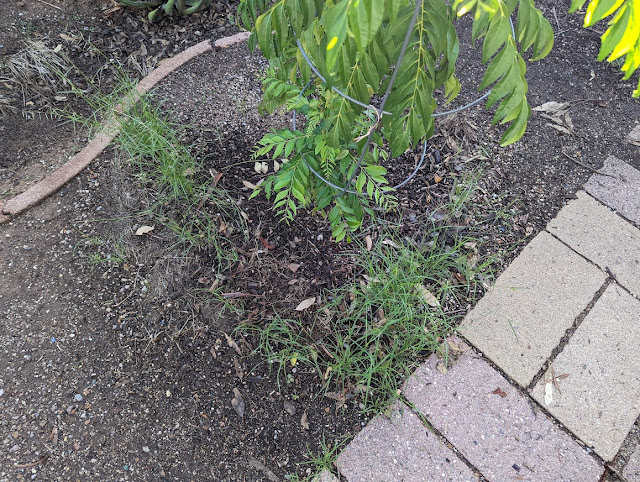 I hope this helps you see "weeds" in a new light. Keep the native plants you like, pick the
weeds you don't. And you can walk barefoot in a yard you love as much as we love ours.
Thanks to Jared from Spade Foot Nursery for helping identify some of the local wild flowers.
More Information:
Here's a guide to native wild flowers that grow in the Spring: