I had just finished posting my last blog celebrating our flourishing moringa trees when BAM! someone asked me how they did in the sudden freeze. I wandered outside to look - thinking I might find a few wilted leaves.  I am still reeling from what I found. All the branches and leaves were frost bitten and drooping like stick figures in a hangman game. 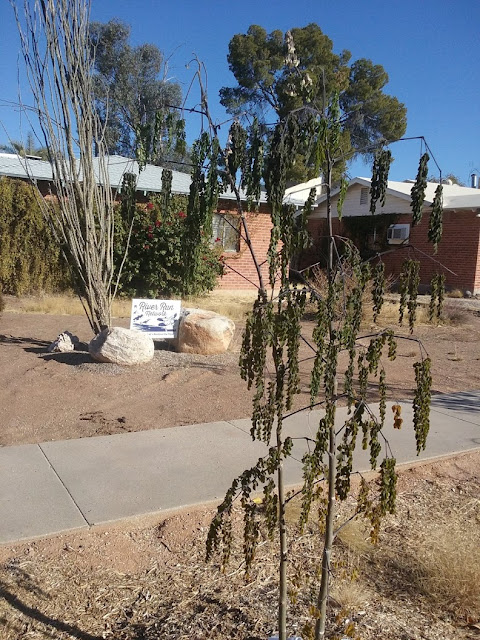 By the next day, the flowers had dried on the branches. I tried one. Blech! It tasted awful. I hoped that the hearty pods would make a comeback.  But a few days later they shriveled up and died, too.

I shared my disappointment with my mom. How would I face the neighbors who had watched me lovingly nurturing my moringas since they were little. Even when it was time to trim them back so they could branch out, I didn't.  I wanted the neighbors to see how well they grew in Dan's catchment basin. Now the whole neighborhood can see my Charlie Brown moringa trees. Mom asked if I was going to share how they were doing on our blog. "I think you should," she said. But was there anything positive I can take from this experience, any lessons to impart? 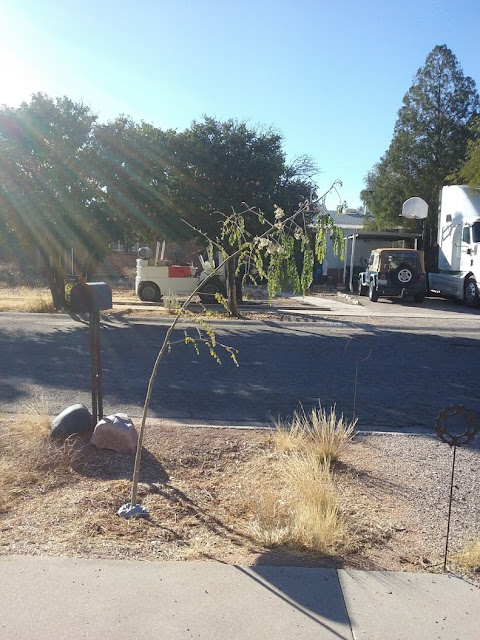 They say the best lessons come from failure.... I certainly have my regrets. Why didn't I listen to the guy on Tucson Backyard Gardener who warned us that it was time to harvest the last of the leaves? Why didn't we cover the whole tree instead of lamely wrapping a sheet around the trunk? Dan said that it was important to see how this tropical tree would fare in freezing weather. The answer is clear. They don't. I suppose that is why some people grow their moringa in pots, so they can take them in out of the cold. But I've also read that the pot stunts their growth.

If we had potted them we wouldn't have had the abundant leaves that we enjoyed every day. Dan wouldn't have been able to grab his daily moringa supplement while out walking the dog. Towards the end (sob), I was adding them to everything: soups, tomato sauce, calabacitas, eggs... I enjoyed moringa tea everyday - iced tea with fresh orange juice or a hot cup to make me feel better when I was sick... I even brought some to an ailing friend. Ah, the memories...  I wouldn't have missed it for the world!  (Better stop before I break into song.)

We plan to prune what's left of our moringa down to a stump so it comes back as a bush. I hear they will come back next growing season with even more branches and leaves. To everything there is a season. (There I go again with the songs...) 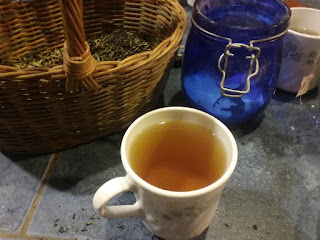 Yesterday I harvested some of the dried leaves from the branches. (See pic at top of page.) They came off easily.  We seeped our own blend last night and shared a lovely cup of tea. It was even better than the tea from the fresh leaves!

And I won't regret what I did for love. 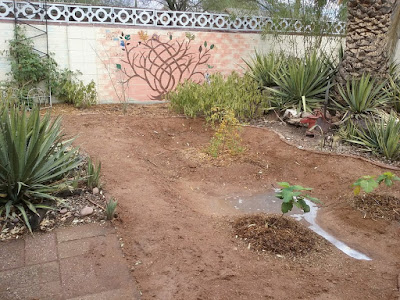 We have a dream of transforming our previously gravel yard into a desert oasis with an edible forest and native pollinators irrigated with rainwater.  We have a long way to go. Just making our landscape as water efficient and sustainable as possible is an experimental process.

It all started by observing where our water was puddling during our magnificent monsoons. First, we made some small changes such as removing a few bricks at the end of the patio to allow it to drain into our hummingbird trumpets. And it worked beautifully! No more mosquito breeding pool! And our hummingbird trumpets perked right up! 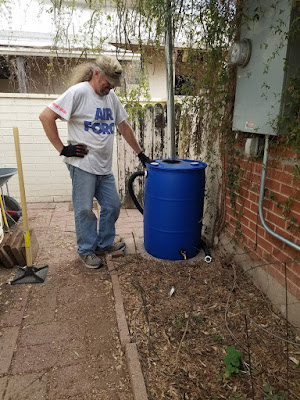 That success led to other simple adaptations like using the gutters to direct roof water into our kitchen garden.  Our kitchen garden is a little experiment in growing food using just what the desert provides to naturally nourish the soil (like compost and palo verde mulch.)  It took 3 gallons of water a day for a few herbs and a couple of tomato plants. So we started supplementing that with kitchen rinse water. Ever the optimist, Dan installed a couple of water barrels to collect more rainwater.  All for a tomato! 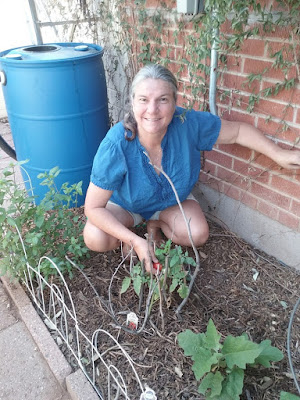 Maybe we'll get a bigger reward for our efforts in edible native plants... 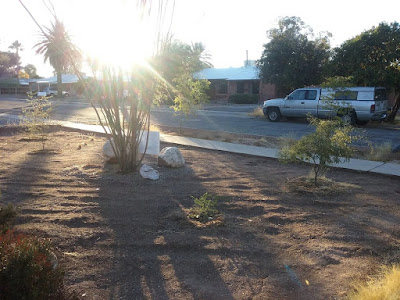 Dan dug up all the gravel in the front yard so the rainwater would sink into the ground instead of flowing out to the street to evaporate. (We still need to add some organic mulch. It works with the roots of native grasses to form a sponge that allows the rainwater to seep into the ground and hold the moisture longer.  This is what Brad Lancaster calls "planting the rain.") We would use that water to irrigate an edible forest of native plants:  broadleaf hackberry. sweet acacia (behind ocotillo), wolf berry (in basin), desert hackberry (in foreground), and velvet mesquite. Don't know how much human food we'll get from them, but they are great pollinators. We watered them until they were established and then waited for the rain. And waited... Would it ever rain? 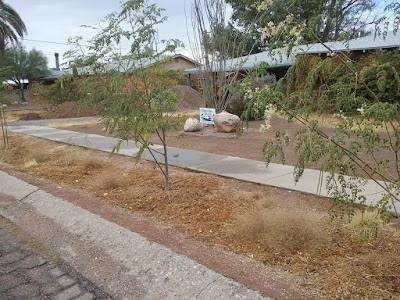 We needed something really drought tolerant that we could eat, so we decided to plant moringa in our street side basin. Moringa leaves, flowers, and pods are all edible and highly nutritious - and not just for wildlife. We sowed the moringa seeds in June so they would be well established by monsoon season. It took about a gallon of water a day to get them started until the monsoon rains finally took over. The incredible thing is that the moringa continued to grow after the monsoons ended even though we weren't watering them! They still have flowers and pods! Gonga!

Now we're watching to see what they do in the first frost. 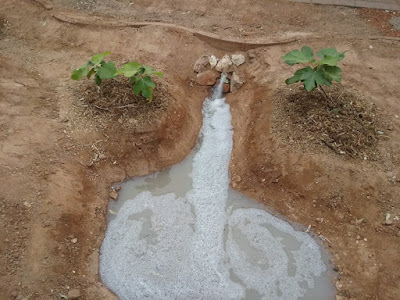 In our backyard, we planted another edible forest of Kino fig and pomegranate trees. (See pic at top of page.)  We chose these heritage trees because they have adapted to the desert.  Twice a week we slow watered them using a five gallon bucket with two small holes. Dan finally found the time to dig out a catchment basin around the fruit trees and to install a laundry to landscape system to irrigate them. "Celebrate good times! Oh, yeah!"  He still needs to shape it a bit and fill it up with organic mulch. (The mulch holds the moisture and releases nutrients as it breaks down.) He managed to get it installed just in time for the winter rains!

What's next? It's back to shaping the front yard basin and filling it with a truck load of mulch. There's so much more we want to do when we have the time and money. A chicken coop by the big garden... Our friendly neighbor has offered to let us connect a cistern to the gutter on his roof to water our that garden! It's all a process! 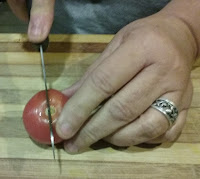 Gotta love the process!
Posted by Jana Segal at 9:41 AM No comments: