Our Desert Community Plants the Seeds for a New Doc

Since Dan and I started blogging about our journey to a more sustainable lifestyle we have had the opportunity to come in contact with so many inspiring community groups cultivating an oasis of sustainability here in Tucson.

Tohono O’odham Community Action (TOCA) is reviving their cultural traditions by having tribal elders mentor youth on their native foods. Friends of Tucson’s Birthplace re-built the Mission Garden, a living museum, to demonstrate how to grow crops from pre-Columbian to those that Father Kino established in that location.  Native Seeds/SEARCH
maintains community food traditions by preserving diverse and heritage seeds. Manzo Elementary, Changemaker High and City High tend to the next generation of desert gardeners. Through their community garden programs, the Community Food Bank of Southern Arizona doesn’t just feed the hungry, but teaches them to grow food for themselves. Iskashitaa Refugee Network assists refugees in becoming self-sufficient (and reduces food waste) by harvesting fruit that would otherwise go unpicked. Dunbar Springs neighborhood worked to make their street an example of an edible, urban forest irrigated by rainwater. Watershed Management Group is building a community that works together to restore Tucson’s aquifer by implementing rainwater harvesting techniques and desert landscaping in people's yards, gardens, streets and businesses. These groups (among others) are gleaning from Tucson’s rich cultural history ways to live in harmony with the desert. This is truly an exciting time to be a part of this vibrant community!

I decided to make a documentary about the accomplishments of these communities with the hope that it would inspire others. So I approached activist/ documentarian Evan Grae Davis with the idea. Evan had just read Edible Baja Arizona’s article about Tucson being the first US city to be designated a UNESCO World City of Gastronomy for the same advancements. He was excited to tell our story!


Our last shoot was for the rainwater harvesting segment featuring Watershed Management Group. Dan and I have planted our roots into the WMG community. In addition to being members of their co-op, Dan recently got the good news that he was accepted into their docent training program!  We love being a part of a community that is working to restore our groundwater and get our rivers flowing again.

Here we are shooting in Jason and Connie Carder's yard. (See Jason working alongside of Emma in the pic above.) They had 3 roadside catchment basins (wow!) and berms installed to control the runoff after their house had been flooded during a recent storm.

A little patch of purslane ignited a conversation about edible weeds. Later in the day, Dan heard someone call out, "Don't step on the purslane!" A woman after my own heart! It's so great to work alongside kindred spirits who feel as passionate as we do about getting our rivers flowing again and protecting purslane!
Posted by Jana Segal at 7:31 PM 1 comment:

Are you a good weed or a bad weed? 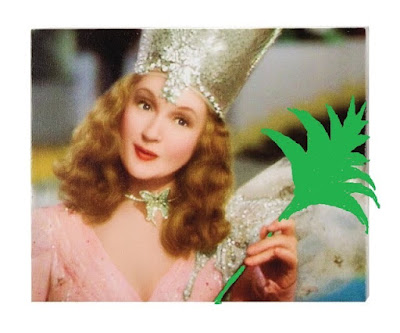 You may have heard the saying: one person's weed is another person's wildflower. Since I began harvesting edible weeds, I've really started looking at them. Really seeing them. Some are pretty even before they bloom. They make lovely ground cover. But we've been taught to weed out any that aren't in Better Homes and Gardens. Perhaps businessmen called them weeds because they are free. They can't make money off of them, so they invented weed killer. There are other reasons for weeds like nourishing or repairing the soil.

I guess I would call weeds unwanted, intrusive pants. Most of us call Bermuda grass a weed. It's such nuisance! But my husband Dan sees it as a desert survivor. It needs very little water, and you can't get rid of it. It's here to stay! The lawn in our neighborhood park is made up mostly of Bermuda grass. Dan also dried up some and used it (successfully!) as mulch for our gardens. It's all a matter of perspective.

We have a weed (yes! I call it a weed!) that starts off innocently enough with two sweet little leaves, and then grows into a pretty bush with fuzzy light green needles. 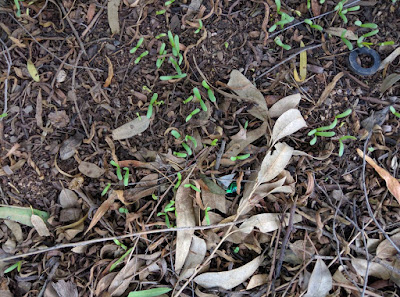 These "bushes" climbed up the garden fence and over the top and dropped tiny red berries (seeds) into our garden. I spent hours pulling those bushes that lined the fence out by their deeply embedded roots. These cute little weeds are the bane of my existence.  Every morning there are new ones to pick out of our garden. On a good day, it's just a handful. But I usually fill up a medium mixing bowl. These bushes took over one quarter of our yard and threatened to take over the whole alleyway before Dan and I spent a brutal morning pulling them out. Dan has since planted another garden in that plot. The soil under these weeds was so rich!

One person's weed is another person's fresh greens. In fact, the Tohono O'odham called purslane and amaranth summer greens.

Last summer we discovered purslane behind the neighbor's wall.  I was determined to make sure that the patch returned. I bet Dan thought I was crazy for pulling Bermuda grass in the utility road. But I wanted to make sure people didn't use roundup on my favorite edible weed. For a long time nothing grew. Until... we had a couple of big storms. Then we had horse purslane. More rain, more purslane. Common purslane and amaranth! It grew every place I had pulled out the grass!


Nearly everyday we pick some purslane or amaranth from our backyard buffet. You can snap off common purslane (with the tear-shaped leaves) and pop them in your mouth. To me it tastes like a combination of parsley and citrus. Some people think it tastes slightly peppery. It's great raw, stems and all, for salads. It's also yummy sauteed like spinach, on meat, in soups and sauces. 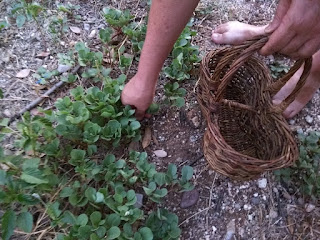 If you snap off the branches where they meet the stem, you can leave the rest of the plant in the ground to grow more! 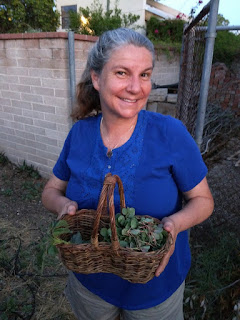 We've got tons of native horse purslane growing in our alleyway. You can identify it by it's round leaves. Unfortunately horse purslane makes my throat scratchy if eaten raw. So I saute the leaves or cook them in sauces or soups and enjoy all that omega 3.

It was a pleasant surprise when amaranth popped up next to the purslane! Our guide to native foods suggested that we eat the leaves when the plant is still small. If you pull off those on the outside and leave behind the little ones in the middle, the plant will produce more leaves to eat. 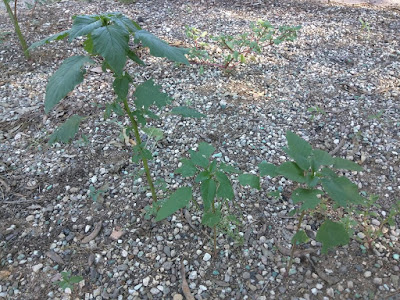 Dan puts uncooked amaranth in his omelet, then tops it with sauteed purslane and salsa! 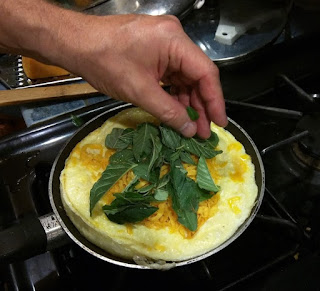 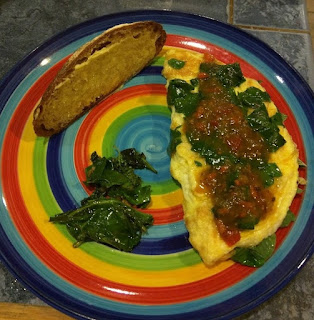 Who gets to decide what's an ugly weed and what's a useful plant? It all depends on how you look at it. When I walk down the street, I don't see pesky weeds growing in the cracks of the sidewalk. I see lunch.

Posted by Jana Segal at 6:07 PM No comments:

A while ago we made some minor adjustments in our yard to make use of the runoff to water our Mexican Honeysuckle. 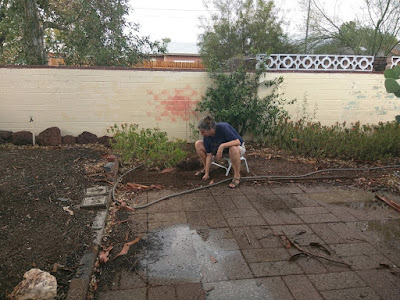 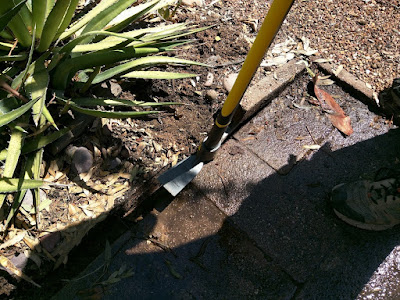 
By working together we can take advantage of our abundant rainfall to make our city greener, save city water, and get rainwater out of our city streets! Making use of all that glorious rain is a great reason to celebrate!
Posted by Jana Segal at 9:00 PM 2 comments:

Email ThisBlogThis!Share to TwitterShare to FacebookShare to Pinterest
Labels: catchment basins, flood damage, Gardening, Rain in Tucson: A Reason to Celebrate?, rainwater harvesting, Tree of Life, Watershed Management Group
Newer Posts Older Posts Home
Subscribe to: Posts (Atom)
Our musings on the steps we are taking to transform our convenient consumer lifestyle into a more sustainable lifestyle - by incorporating sustainable practices and habits into our everyday life that protect our land and conserve our precious water supply.