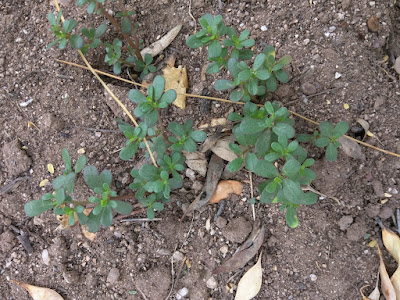 If you've been following my blog awhile, you might recall how I weeded the garden just to have Dan come along and plant weeds in it. One of those weeds was purslane, (also known as pigweed or verdolagas in Spanish.) We heard that they could grow in harsh conditions, so Dan tried transplanting some in the gravelly dirt to the right of our garden. They immediately wilted and died.

To be honest, I have been kind of obsessed with this delicious, healthy (rich in Omega 3) weed since I found it growing abundantly on the service road behind our next door neighbors' fence. Free food! One day, I saw Dave weeding his yard so I asked him if he ever sprayed Roundup outside his fence. I was delighted when he said he hadn't. I took him on a little tour of the alleyway and showed him the purslane and asked if it was alright if we picked it. He said sure. I started weeding the burmuda grass to keep the city or another "helpful" neighbor from poisoning the area. A while back I had found a pile of dead bees by our gas meter. Since then I have been diligently weeding the area to keep the city from spraying it with poison. (Good news, the bees are back!) 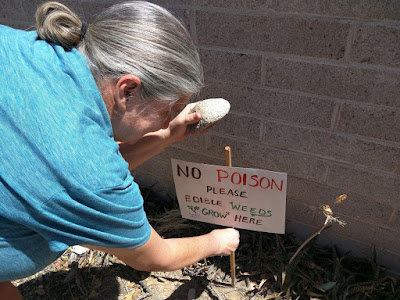 Soon after our failed attempt to transplant the purslane, the purslane in the alleyway got bitter. (I think it went to seed...) Recently, I've noticed purslane popping up between the road and the side walk. It was often by some sort of water source - run off from the roof or an irrigation system. About  two weeks ago, I found a nice patch by the bus stop where there was a drip system watering the median strip. I picked a huge handful, carried it home (muddy roots and all) on the bus, and picked up some tomatillos and cilantro for Mexican verdolagas stew. As I washed the dirt off, I could almost taste the craveable stew. That's when Dan informed me that he wouldn't be eating that because it could be poisoned with Roundup. Determined that my effort not go to waste, I grabbed up my purslane and planted it (burying each plant a few inches away from each other) in the garden along side of some browning turnips. I figured it might come up next year or at least nourish the soil. Dan sporadically watered the few veggies left in our garden. 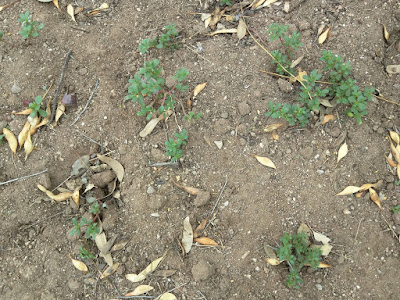 After a light rain, I was surprised to find the purslane growing where I planted it in the garden! I still had the tomatillos and cilantro, so I grabbed up a handful to make a small batch of the stew! It was as tangy and delicious as I remembered it.

Here is my version of verdolagas stew slightly adapted from the traditional Mexican version. I love this just the way it is, but meat lovers can add pork.

Grab as much purslane as you can from your garden or backyard. (Leave some of the plant in the ground if you want it to continue to grow.) Wash it well. You might as well wash the cilantro now too. Chop up the purslane and the top of the cilantro separately. Set aside.

Peal the garlic, cut a quarter of an onion, simply remove the tough covering off of the tomatillos and cut into easily blend-able wedges. Throw all but purslane into the blender or food processor until it is liquidy (is that a word?) Cook in small pot or skillet for about 5 minutes. Meanwhile, chop the cilantro in blender. Add the purslane to stew. Cook until tender. Add cilantro just before serving. You can also melt a little queso fresco in the stew if you like. It's good either way.

Serve with tortillas, add a squeeze of lime, crumble on some queso fresco. Yum! 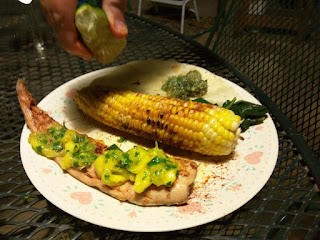 What we ended up having for dinner: fish rubbed with chili powder and topped with mango salsa, roasted corn with chili power, butter and lime, steamed chard from our garden and verdolagas stew on a flour tortilla.

Find a quicker version of this recipe on this blog.

IDENTIFICATION AND PREPARATION HINTS: Purslane is considered a succulent. The tear shaped leaves are smooth and thicker than a tree leaf. The stems are pinkish or light green. The stems have a nice tangy, crisp bite when raw. They are best eaten soon after picked. You probably don't want to eat it when it's gone to seed or has flowers because it gets bitter.  You can add it raw to salads, sauteed (good in an omelet), stir-fried, in soups, hidden in tomato based sauces, or in most recipes where you would use leafy greens. It has a milder taste than most leafy vegetables.

If picking purslane in the wild, don't confuse it with spurge. You can tell the difference because spurge is woodier, branches spread out from the middle along the ground. It is sticky to the touch and has a white sap if you break the stem.