How Does Our Garden Grow? 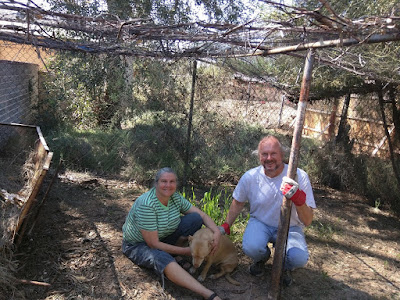 One of the things we are working on is not wasting food. But inevitably we would discover moldy, slimy vegetables at the bottom of our curiously named "vegetable crisper." We figured at least we could compost those uneaten vegetables so they wouldn't go completely to waste.  Little did I know that the stinky compost pile would lead to ME actually gardening! 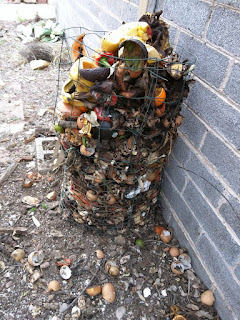 HISTORY OF THE GARDEN: When my ex and I first moved into this house in 1996, we discovered a fenced in garden area and the remains of an elaborate, antiquated watering system. As I examined the garden remains, I had flashbacks of working up a sweat picking my Nana’s green beans on her little farm during that long, humid Missouri summer. Moments like that inspired me to dub the state “misery.” Well, that and all the ticks and chiggers. Nana would coax us on with, “We’ll get to eat all the yummy food we pick!”  But I detested the bland green beans that filled her freezer. Kazaam! An eighty-year old man appeared in the garden! He showed us how to start a garden in the plot he had built back in the 60s. He picked up a hoe and started removing weeds. 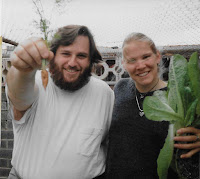 We were pretty much obliged to garden at that point. That season we grew more romaine lettuce than we could eat. My strict vegan sister strongly encouraged us to grow her some organic vegetables. She came over one time and harvested ONE head. The carrots were pretty pathetic and more work than they were worth.

There were some good times. I remember digging a hole about the size of a mop bucket and planting pieces of an old potato that had grown roots. I watered my little garden hole faithfully and eventually potato plants surfaced. The little curly-haired neighbor girl, who used to drive her pink Barbie electric car around the block, helped me dig up the tiny potatoes. It was like a treasure hunt! We savored our potato lunch.  That little girl is now a college graduate. I ran into her a few months ago. She asked if I still had a garden. She remembered it fondly.

I’m afraid I let down that curly haired moppet, Nana, my previously vegan sis, and our fairy gardener. Those were the only foods me and my ex ever grew in the garden.  Mostly we grew weeds. When my son was seven he helped me weed the garden. We “planted” fossilized stones, petrified wood, and collectible rocks to be dug up at his paleontology birthday party. Dan and I still unearth the occasional polished rock, toy shovel, action hero or truck. Just the other day, Dan dug up the habitat that a pet crab was buried in. 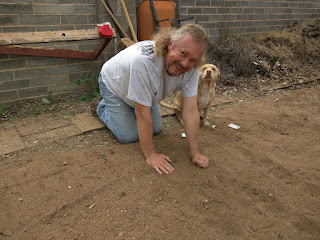 A big motivation for starting our garden was to see if anything could grow in our desert soil (research for Dan's Sonoran Gardener app.) We began with heat resilient heritage plants. You might remember the blog post where I bemoaned weeding the garden just so Dan could replant weeds in it. While the purslane flourished in the alleyway behind our house, the edible weeds didn’t survive the move.

Next, Dan selected some heritage and seasonal seeds from the seed library. 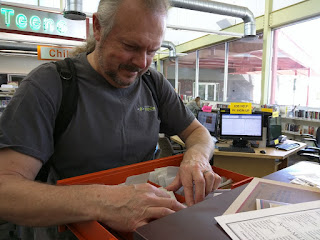 He planted Sonoran winter wheat and carrots, radishes, kale, chard, turnips, and cilantro. Remember the fragrant compost pile? He didn't use any of it. (It wasn't ready....) He covered it with an organic mulch of dried grass (weeds!) and the leaves that fell from the huge eucalyptus trees overhead. I was sure that the weeds would grow more weeds. We watered it with a sprinkler three days a week.

What did we learn from our Test Garden? 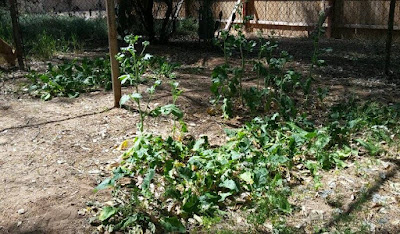 We learned we could actually grow food in that soil. Yeah!

We (correction... I) learned to not to irrigate during the day, or it will only evaporate. (Yes, smarty pants knew.) 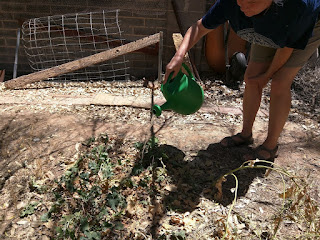 We learned to snip the leaves off of our cilantro and leave the stems to grow more leaves.

We learned that radish greens are delicious sautéed with sliced radishes.

We learned we liked steamed chard from our garden better than store-bought spinach.

We learned that only Dan will eat the kale.

We learned that the mulch didn't regrow grass and that the eucalyptus leaves and bark weren't as good as the grass mulch. (Darn it...those trees shed so much every Fall!)

I learned that you can keep the weeds up by pulling a few every morning. And that I feel satisfaction by staying on top of them.

I learned that I should probably stretch my creaky old bones before weeding. 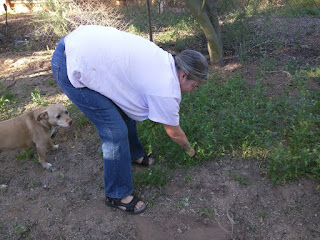 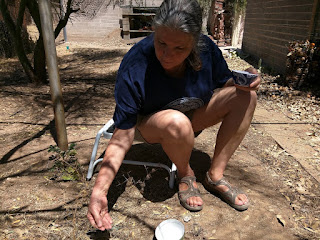 I learned to bring out a step stool to sit on rather than straining my back.

We learned why our little patch of Sonoran wheat kept shrinking... 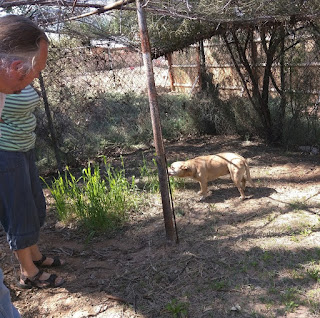 We learned that those stubborn carrots need more water or ya don't get nothin'.

We learned the turnips were the slowest to grow. Gotta keep watering 'em. 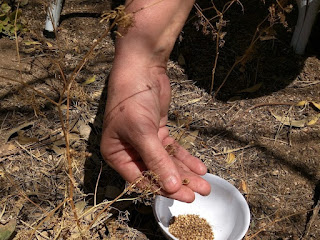 We learned that the cilantro turns into coriander seeds - plenty of seeds to replant or grind into a handful of spice.


I learned that I actually like gardening. It was an excuse to get outside, sink my hands in the soil, and enjoy the morning breeze as lizards skitter about and birds chirp in the palo verde tree. 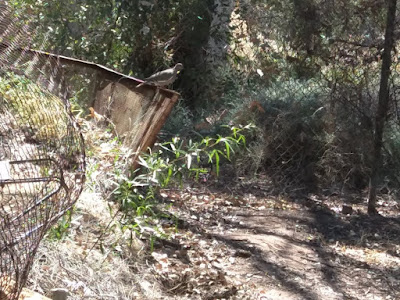 And sometimes I still feel the presence of my fairy gardener.
Posted by Jana Segal at 1:12 PM