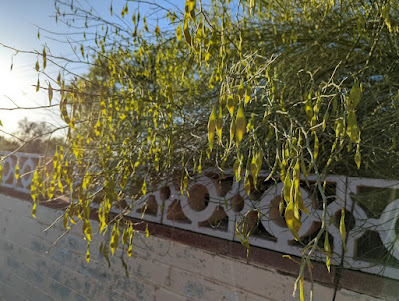 Want a native food snack that isn't as spiny as some?  You might have some growing in your own yard!  I spotted these palo verde pods hanging over the backyard fence. 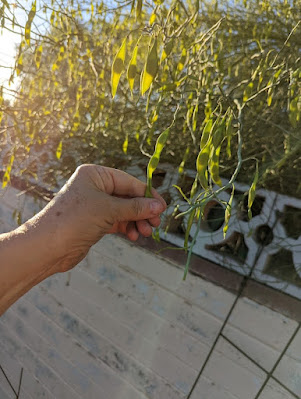 If you gotta pull them from the ground, you can munch on the new sprouts! 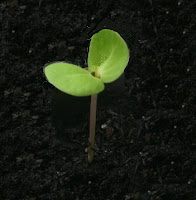 But they won't be as tender and sweet as the green palo verde seeds. Just crack open the pod and pop the seed in your mouth.  Unlike mesquite where you can gnaw on or suck the ripe pod, the palo verde pods are bitter.  But the seeds are so delicious - reminisent of edamame. (And you don't have to blanch and salt them.)

Unless you want to blanch and freeze them... But why wait when you can have a yummy snack right now?
For more ways to serve palo verde, check out this blog.

And here's how to harvest mesquite.
Posted by Jana Segal at 4:06 PM 1 comment: 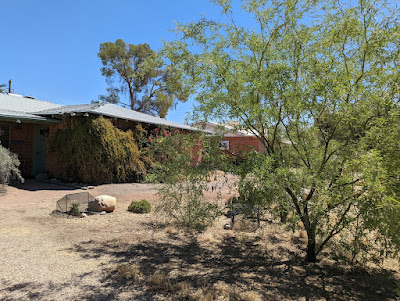 In my April 6th blog I wrote about my little experiments of growing a vegetable garden amongst my desert plants at strategic spots around the front yard.  Here are the results of those experiments and what I learned from them.
I planted one of the tomato plants in a hole left from pulling out a dead milkweed. The soil around the roots looked really good so I thought the tomato would do well out there in the sun. I protected it from lizards and squirrels with a plant cage.  As you can see, this tomato plant did great. I was delighted when it got flowers. But I wasn't sure if it was a self-pollinating tomato, so I took the cage off of it for a few days.

To be honest the plant cage was a little bit of a pain. I had to remove the gravel I had built up around the cage to keep out the pesky lizards. And it was difficult getting the spike that held the cage down back into the hard ground. One day I spotted some termites in the woodchip mulch dangerously close to the tomato plant, so I had to remove the cage to pull the mulch back. Another time I had to remove it to pull off some low branches that were getting brown from touching the ground. But all in all I'd say it was worth it. Look at all those tomatoes that the squirrels can't get!
The next experiment wasn't as successful. I wanted to see how our tomato plant would do in the mesquite guild. I was hoping the tomato plant would benefit from the nitrogen the bean tree fixed in the ground. I don't know if there was too much shade, mulch or the hard ground that kept the plant from thriving, because I damaged the trunk when I pulled off a low hanging leaf. 😒 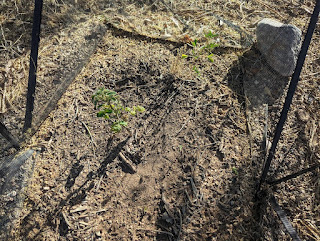 Next are the Jerusalem artichokes (also known as sunchokes). I hand water all of my garden to control how much water I use. I was concerned about how much water I used to get these started.  I watered them several times a day to keep the bulbs moist as recommend.  It was really good for soil. Check out the mushrooms growing there!

But all the new watering used up the rainwater in my cisterns. Once they were established I cut back the water to once a day.  They seem to be alright with it. I think the living purslane mulch helps retain the water.  I heard that plants don't take in water above 80 degrees. So I try to water them in the morning just after 8 a.m. (Now that it is getting hotter, it's more like 7 a.m.)

Unfortunately, I didn't get directions on the sunchokes before planting them. I found out later that they would crowd out any other plant nearby. So when they got bigger, I removed the tomato I planted under the same cage.  I dug the hole in the new spot first, then I carefully dug around the roots of the tomato plant and grabbed some of the surrounding soil to plant with it. 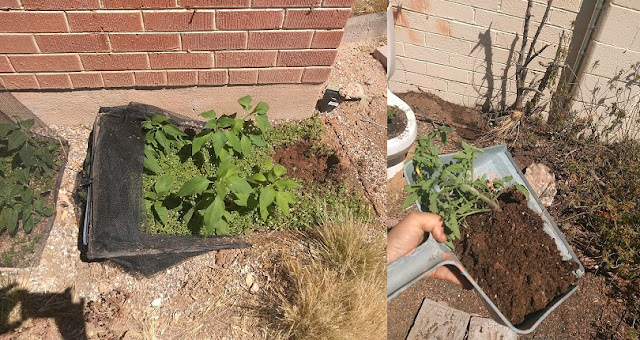 Might have been better not to do this during the heat of the day... It was looking really sad. I even had to prop up the wilty branches with some sticks.  I thought it might be a goner. 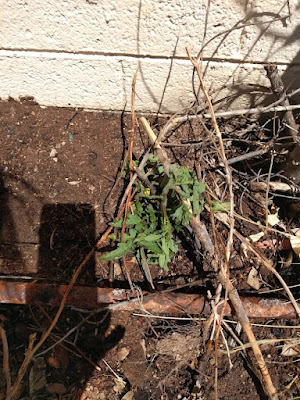 But I watered it and concocted a shade contraption for it. 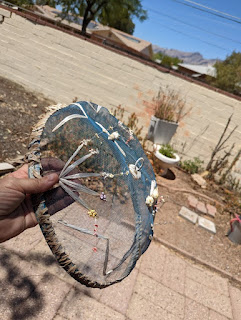 I went ahead and harvested some purslane for lunch while the sunchokes were uncovered.

The tomato plant is thriving on the south facing wall that gets plenty of sun and occasional shade from the toilet planter (don't ask... lol)  I try to water the tomatoes at the same time everyday at 8 a.m. before it gets too hot.

Well, that was a fun and mostly successful experiment!  I learned a lot and didn't kill most of my plants.
Posted by Jana Segal at 4:34 PM 2 comments:

Email ThisBlogThis!Share to TwitterShare to FacebookShare to Pinterest
Labels: desert gardening, edible forest, Gardening, Jerusalem artichokes, plant cage, sunchokes, tomatoes
Newer Posts Older Posts Home
Subscribe to: Posts (Atom)
Our musings on the steps we are taking to transform our convenient consumer lifestyle into a more sustainable lifestyle - by incorporating sustainable practices and habits into our everyday life that protect our land and conserve our precious water supply.