Preparing the Soil for "ReGeneration: The Tucson Story"

I click the link - Join with Computer Audio - like I've done numerous times while recording my virtual play ReGeneration: The Tucson Story. But this time there is a class full of teenage art students waiting behind their Zoom windows for me to be let in. Their teacher, Amy Wood from Sky Islands High School, introduces me. I scramble to recall what I had planned to say to inspire them to create art work for my play - starting with the story of why I decided to take on this ambitious project. I recount how I used to take my kids to the pool every summer afternoon to cool off from the hot Tucson sun. Inevitably we would end up waiting in the car until the monsoon storm had passed. But as the boys grew up, I began to notice that it didn't rain as often as it used to. I began to worry. What if Josh and Jeremy decided to stay in Tucson? Would there be enough water?

Then an event happened that changed our lives.  One fine fall morning, my husband Dan peddled off to enjoy Watershed Management Group’s Homescape Harvest Tour clasping a map of some yards that the co-op had worked on. When Dan got home, all sweaty and out of breath, he rushed me out the door to see some exciting examples of rainwater harvesting. I was especially blown away by WMG’s Living Lab and Learning Center where every plant on the property, including some fruit trees, were irrigated with stormwater. They weren’t using any city water! Docents explained how there was enough stormwater to fill every Tucsonan’s needs if we all “planted the rain.” Finally! A practical solution to making Tucson water secure! 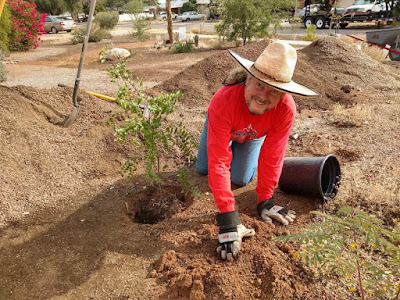 For the last seven years, Dan and I learned everything we could about rainwater harvesting and sustainable living. He became a member of their co-op, spending every free weekend digging catchment basins in people's yards to sink in the rain and installing big water barrels to collect runoff from rooftops to irrigate native plants. I blogged about our adventures (and misadventures) in transitioning our own yard into a desert food forest.
Then we realized that despite our best efforts most Tucsonans still hadn't heard of rainwater harvesting. We needed to reach beyond our little Facebook bubble. That's why I wrote the play - to reach out to those who would be the most impacted by climate change - particularly young adults. Like those in Ms. Wood's art classes. We needed their help to make sure our play appealed to their generation. Fortunately, the students embraced the challenge and went to work creating the art that opens many of the scenes. We're thrilled to have them on our team.
ReGeneration: The Tucson Story is about a diverse group of teens who bring their communities together to save Tucson as the climate disaster progresses. The cool part is that it was presented by a diverse group of teens inspired to share sustainable solutions.

To reach the teen audience, I needed to make sure that the dialogue reflected the way they speak. This was an issue because it had been a while since my boys were teens. A high school English teacher agreed to have her students look over the dialogue when they got back from Spring Break. Then COVID struck.

I continued to work on the script after my screenwriting group critiqued it. I was painfully aware that while the pandemic may have stalled my efforts, it certainly had not slowed down climate change. I decided that it was time to contact high schools and theater companies about producing the play. But they had problems of their own. Teachers were struggling to adapt to virtual classes. Local theater companies were working on ways to stay relevant. There was no time to read a play from an unknown playwright. However, in the problem was the solution. Drama teachers and theater companies started producing virtual (Zoom) plays. That was it! Inspired by their productions, I decided to produce a virtual reading of my play.

It was time for a leap of faith. I started a search for the diverse cast of 16. A friend introduced me to a drama teacher. She announced it to her class. I finally got a response from a bright young actress, Itzel Macias. She convinced a couple of friends from drama club, Ariel Cheng and Andrew Trever, to audition. They impressed me with their talent and enthusiasm! I cast them all. They were instrumental in getting this production off the ground becoming the first members of Team ReGeneration.

Andrew Trever, who plays Alex, wrote in his bio: “I joined the ReGeneration project because as a young Latinx person it spoke volumes to me to be able to work with such a diverse cast and to be able to talk about a subject that affects me and the very town I call home.”

I strongly believe that our diverse communities need to work together on sustainable solutions if we want to lessen the impact of climate change. That theme is woven throughout the play. It was important that those voices be as authentic as possible. So I researched Tohono O’odham and LatinX cultures. To make sure I was respectful of their traditions, I had members of those communities give me feedback and incorporated their suggestions into the script. I made a concerted effort to cast the main characters with actors of the correct ethnicity. That was a challenge. After an exhaustive search for the Latino brothers, I finally spotted a PSA with a young man who looked right for the part of Rogelio. I tracked Eduardo Rodriguez down on Facebook and asked him if he would be interested in being in my play. I waited with anticipation as he read the script. He got back to me after a few days. Said he was fascinated with the sustainability aspects of the play. But it was the characters’ relationships that kept him turning the pages! He was definitely interested in the part. Only... one thing... he was a Pima Community College graduate. Somehow I managed to convince him that he could play 14 year old Rogelio. And I was right. It was fun watching his transformation! 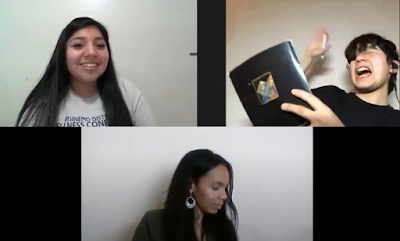 As difficult as it was finding the young Latino actors, I knew I had a bigger challenge ahead - finding a Tohono O’odham actress to play Ha:san. Then it happened... a little miracle...I discovered a short video by a young Tohono O’odham woman who lives on the reservation near Sells. We connected on Facebook. I was so blessed to have Tierra Domingo in our production. We worked together to make sure her character and the T.O. traditions were presented accurately and respectfully. She even recruited her little sisters for the storytelling scene – all donned in their traditional Tohono O’odham dresses! Tierra recently shared her experience in her tribe’s newspaper, The Runner. Her dress inspired this drawing from Sisiki Bidelman-Owens, one of the art students from Sky Islands High School. 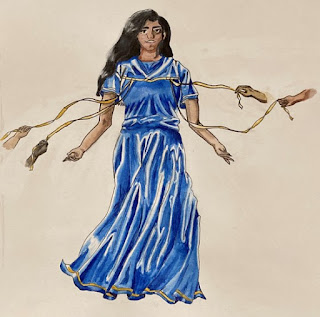 I am so proud of the talented and hardworking young actors who also contributed as the assistant director, stage manager, promoters, technical support and artists. We held all of the rehearsals and production meetings online. There were certainly challenges with using a virtual medium and a steep learning curve for me. But it was fun to work with this creative group of young people to find solutions. The teens were masters at coming up with blocking and using props in the limited space. Even separated in their individual Zoom frames you can see the comradery. They were also my advisers. When I was struggling with finding the balance between using authentic street dialogue and being culturally respectful, they shared valuable insights. They taught me how to be a better director and communicator. And I think they learned a thing or two. Throughout the rehearsal process, the teens discovered sustainability practices like rainwater harvesting and regenerative gardening. During the Q & A at our virtual premiere, some shared what they learned. Andrew said he's thinking of growing a garden! Plans are in the works for Tierra to speak at Ha:san Prep, a Tohono O'odham school here in Tucson.
Speaking of the Q & A... There is another member of the panel I want to introduce. I was looking for an artist who could bring a teen audience to our virtual premiere and a friend recommended R3D. To be honest, I wasn't sure if he even wrote the kind of lyrics I needed. There were no songs about the environment or climate action on his page. The closest thing I found was a music video about the police inspired by what had happened over the summer called "Land of the Privileged." But when I pointed out that he still had eight days left to write a new song for the premiere, he took up the challenge. He wrote "Our World" super fast, in two days. I asked him why he was interested in this project and he responded, "I’m all about cleaning the earth. Saving the planet, we live in it and we must keep where we live clean. I also want my kids, kids, kids to have a better future but it starts with us. Therefore our kids will learn and continue to keep Earth clean so their kids future will be brighter than ours."
Listen in as R3D performs his new song, "Our World" and joins Tierra, Andrew, and Itzel on the Q & A at our fun-filled virtual premiere of ReGeneration; The Tucson Story now available on Youtube.
People are always inquiring why more young people aren't involved in our sustainability community. Sometimes they just need the opportunity to share what they love. Prepare the soil and plant the rain. Invite them to the garden. And watch them grow.
More ideas on engaging the next generation here.
Posted by Jana Segal at 4:39 PM