Springing forward! How my cold-sensitive plants fared the freeze 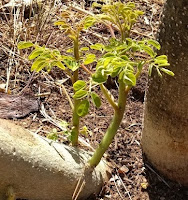 At last! Spring has arrived! After some surprising cold snaps, the sun is shining and I feel confident that there will be no more days below 40 degrees. It's time to share how my plants fared in the cold and what methods worked the best to protect or salvage the cold-sensitive basil and moringa from the hard freeze.

As mentioned in a previous blog, our three moringa trees grew really huge after all the monsoon rain last summer. From experience of winters past, I knew that our moringa (in the right-of-way with nothing to protect them) die during the hard freeze. The whole trunk gets moldy inside. But by spring they usually come back again from the roots. Just to be sure, I wrapped some insulation piping and plastic mailers around the bottom of the trunks. When it rained, I put some reused plastic bags on top so moisture wouldn't seep in between the piping and tree. 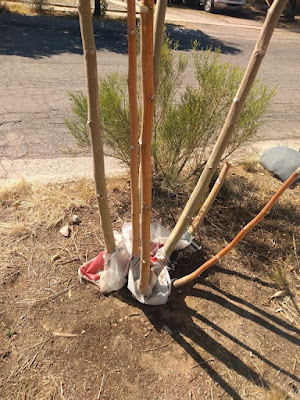 Since we always cut back the trunks when the cold season ends, I decided I would try a little experiment. I cut one of the thick trunks to see if I could propagate it. 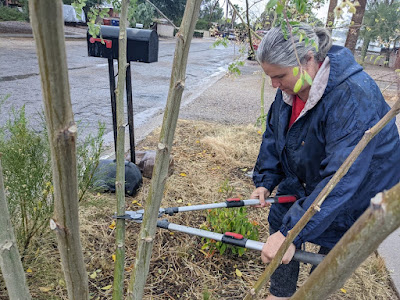 I pulled off the branches and cut it into two pieces and planted them in a plastic potting container about 6 inches into a mixture of dirt, compost and potting soil. Since it needs to be 70 degrees to propagate moringa branches, I kept it in the house and took it outside on sunny days. It was sorta heavy so I placed it inside a 5 gallon bucket. In retrospect, putting it inside the bucket was a mistake. More about this on my next blog... 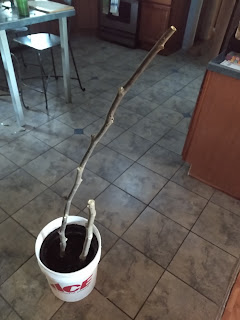 How did the branch clipping that we tried to propagate in the house do?

It has started to grow some leaves!

There was an empty hole waiting for it where one of the moringa died a couple years ago. Check my next blog for the details of how I planted it and how it does in the ground.

How did the moringa in the streetside basin do? After the deep freeze, the leaves and the branches of the trees outside died as expected. But the thick trunks were still green for the first time ever! I waited until I was sure that it wouldn't freeze again before taking off the plastic bags, insulated piping and postal bags.

Under the insulated piping I found new growth! 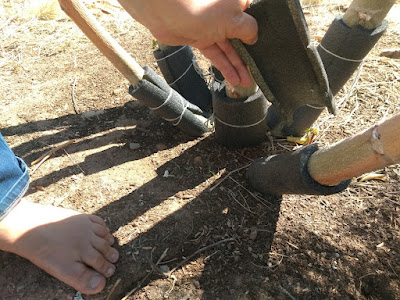 The trunk that was dead on the top - with grey mold - had the most new growth! 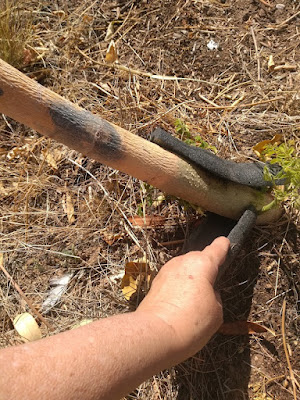 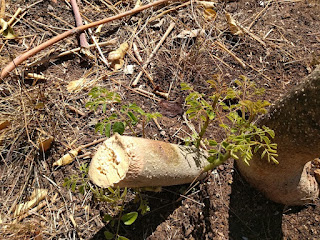 But what happened with the basil experiment? After getting a variety of ideas on what to do with my basil before the freeze,  I decided to try out a few of the suggestions.

I planted three basil plants in a hanging pot using the soil that they were grown in. I watered them with rainwater from our cistern. I kept them in the house during the cold nights and put them in the sun on warm days.  They have some new leaves forming! Success!

Onto the next method... I put some of the healthy basil in a  gardening cage. On cold nights I covered that with an old drape and a table cloth. I uncovered it when it was warm outside.  I also left some uncovered to see how they would do. 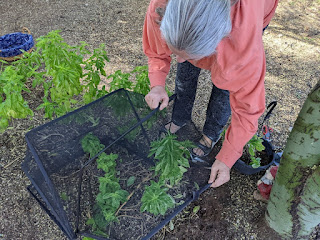 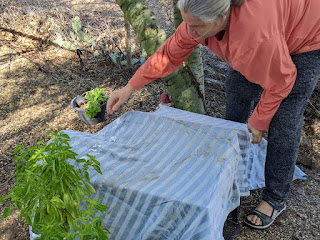 That first night it rained. Both the covered basil and the ones in the ground did very well with the first freeze. I think the deep watering helped those in the ground.
But many days of cold (and some harvesting) eventually took it's toll on the uncovered basil. The lucky ones went to seed. The basil in the cage grew too big and eventually went to seed as well.
Someone suggested that I harvest it before the freeze. I harvested a whole bunch that were getting really tall and going to seed. We made two pints of pesto.  But we only managed to use up one pint before it got moldy - even after sharing some with our neighbor.  In retrospect,  we should have frozen some. 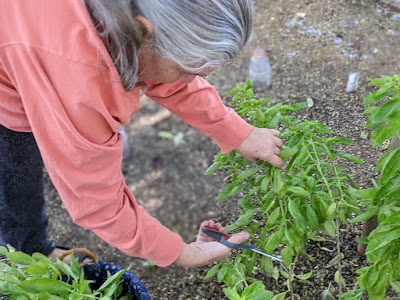 While I was harvesting it, I got a nice surprise. I uncovered a volunteer tomato plant! 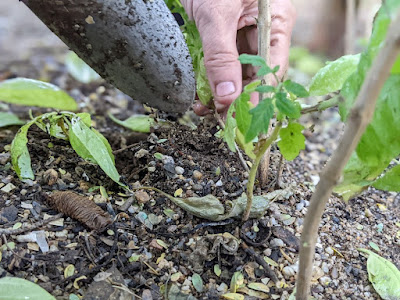 We decided that this little guy deserved the best chance to survive the freeze. So I cut the bottom off a plastic milk bottle to use for shelter. 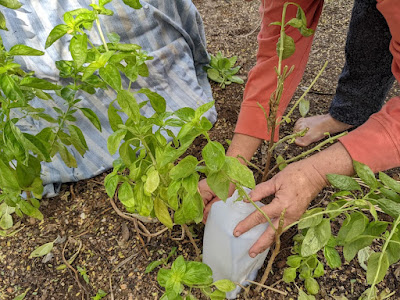 I had done the same thing to protect some cilantro sprouts from the critters in our garden... 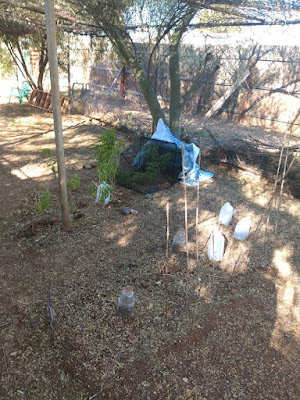 The tomato volunteer ended up dying in a week or so. But the cilantro did well in it's reused plastic "terrarium..." 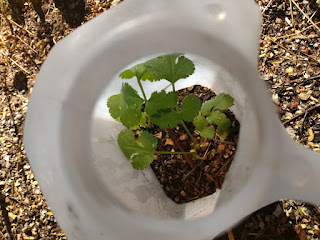 Well... until we got over-cocky and took it off and some critter gobbled it right up.

All in all it was a successful experiment. I sure learned a lot and got to eat a lot of pesto! So I'm good. I'm looking forward to more new growth in the spring!
Check out my next blog to find out how I pruned back the moringa and planted the moringa branch I propagated.
Posted by Jana Segal at 8:32 PM