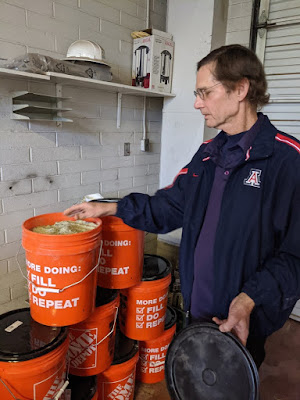 While attending a Mayor and City Council meeting in support of green infrastructure funding, I caught the tail end of their discussion on what to do about our threatened recycling program. Apparently, the city is losing $3 million dollars a year. They discussed ways to save money. One way was to cut down pickups to twice a month. (That change has already been implemented.) They also discussed the high cost of storing glass bottles until they can find a buyer. It was suggested that they throw that glass in the landfill!


I couldn't help but blurt out, "No! Find a use for it!" Not exactly council meeting decorum, I know. But there has got to be a purpose for that glass! In Mexico they used to melt down glass bottles to make glassware. A local artist uses colored glass to decorate her cement candle holders. Since we are running out of sand, couldn't we use glass to replace it in cement structures?

When arriving at the Ward 6 Office for our monthly Sustainable Tucson meeting, my husband pointed out the new sidewalk made out of cement with sand from crushed glass! 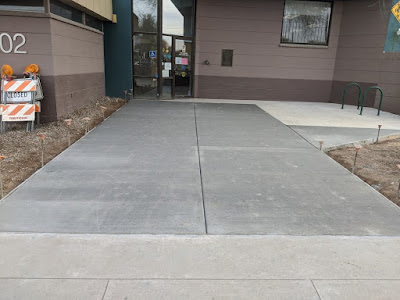 When I mentioned the sidewalk to our Council Member Steve Kozachik, he gave me an impromptu demonstration of the glass crusher he had used to make the sand for the cement. He insisted that I try it myself. It was pretty fun.

Steve said that even the cement workers who put in the sidewalk thought it was a crazy idea to use sharp glass.  But any concerns were eased when Steve let me feel for myself how soft and fine the glass sand is. 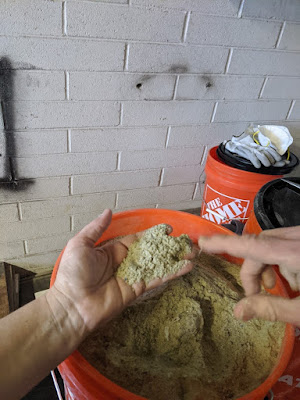 One of the things I love about Steve K is how responsive he is to his constituents. As much as I'd like to think that my outburst inspired Steve, it was really Val Little who approached him with the idea of using the glass to make sand. She had seen it done in other countries during her travels abroad. Steve got right on it. He surfed the web and found a glass crusher for $6,000 then got the go-ahead from city manager Mike Ortega, who agreed to purchase it for a “pilot program.”

When I asked Steve why he took on this project, he explained, "We're losing over $3M annually in our recycling program. We have to devise some creative new ways to do the whole reduce/reuse/recycle thing. This is just demonstrating that to city staff."

He told Arizona Daily Star, “What I’m doing back in the garage is really, really (low) retail scale to show the environmental services people that you can scale this up and we can do this on a commercial level. We can create our own secondary market and maybe even make a few bucks."  The sand will be used for monsoon sand bags/mortar mix/filling alley potholes/cover at the landfill/trench lining...anything sand is used for.

I was grateful to have a place to bring the kombucha bottles that were piling up on my back porch. I coudn't bring myself to throw them in the trash when they would just end up in the landfill.  So I brought a few with me when I went to the Sustainable Tucson meeting at Ward 6. 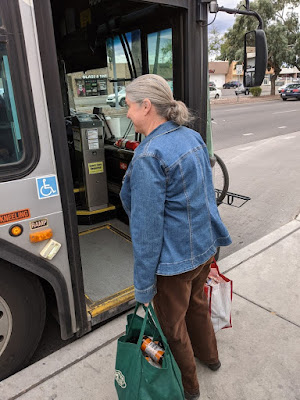 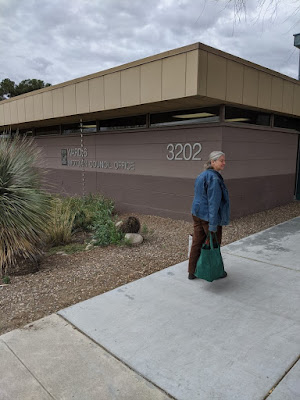 If you were wondering why the Ward 6 garage smells like a brewery, it is because Steve first approached bars on 4th Avenue to supply him with bottles. He is currently arranging for more drop-off locations around town. In the meantime, you can drop them off in the blue bins in the back parking lot of the Ward 6 office anytime you're in the neighborhood or attending a meeting there. No need to take off the labels, but please help Steve out by removing the plastic and metal lids and dumping out any liquid beforehand. 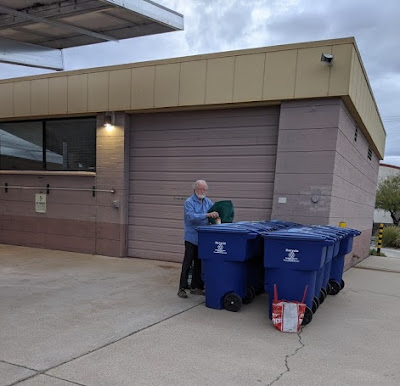 What's next? Steve has the city setting up multiple drop off sites around town, buying a commercial scale crusher, and letting Republic Services know that we're not doing business as usual in the recycle world any longer.

So drop by the Ward 6 office anytime with your glass bottles and to thank Steve K!

The Ward 6 Office is located at 3202 E 1st St, Tucson, AZ (behind the Walgreens on Speedway across from the Loft Cinema.)


UPDATE: Congrats Steve! The plan worked! On Tuesday, Nov. 17, the City of Tucson Mayor and Council voted to remove glass from the residential and commercial blue barrel program and start reusing it. Glass is no longer be accepted in the blue bins, but instead collected at drop-off sites across the city.
Here's a link to the Glass Reuse Plan with details and drop off spots in Tucson.
https://www.tucsonaz.gov/es/announcement/glass-reuse-plan
Posted by Jana Segal at 3:58 PM