Remnants of Hurricane Bud on our Yard: The Agony and Ecstasy 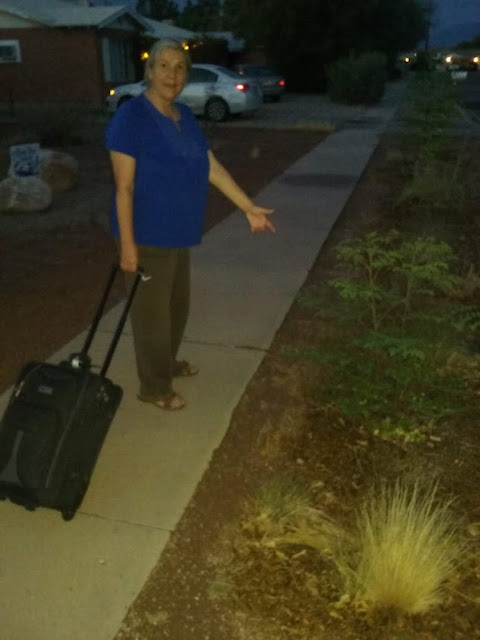 I wasn't sure how our moringa and edible forest would fare while we were away for a two week trip to Lebanon, Missouri. I had left directions on how to water the yard with my distracted son.  Saturday night we came home to this... Our littlest moringa had doubled it's size! The ground was still wet from two days of lovely rain - the remnants of Hurricane Bud. 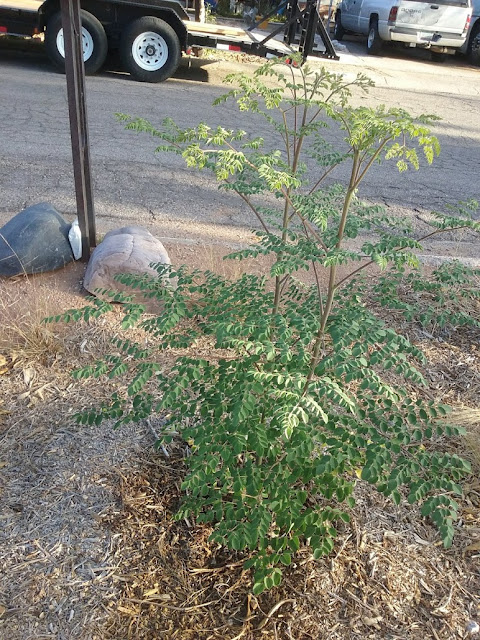 The next morning I surveyed our terrain. The little moringa seemed to grow overnight. The wonders of a good downpour! 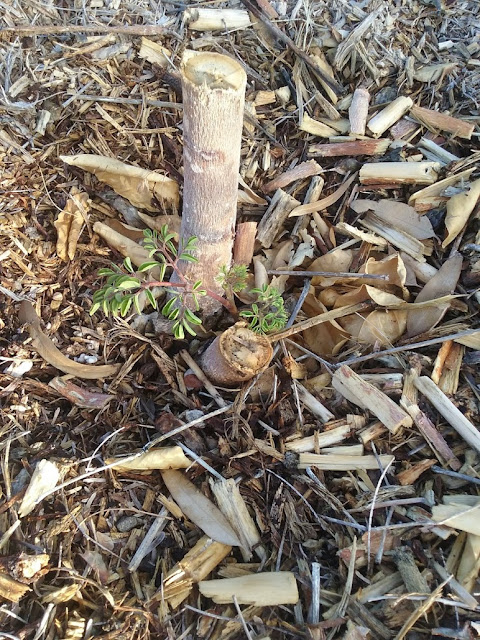 I was delighted to find the "dead" moringa stump (I had given up on after loyally watering it everyday with the rest of the moringa) had finally sprouted a branch! The palo verde/moringa mulch was holding the water nicely. The mulch, along with the native grass in the basin, had also prevented erosion! 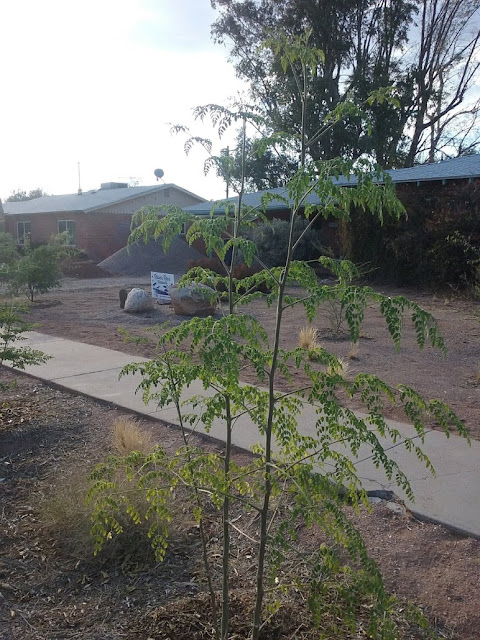 The tallest moringa had grown another foot! It towered over Dan's head. My reward for smuggling three dime bags of my moringa tea in my luggage for my mother? Now we have plenty!

I found out later that Josh hadn't watered them at all in the two weeks we were gone... 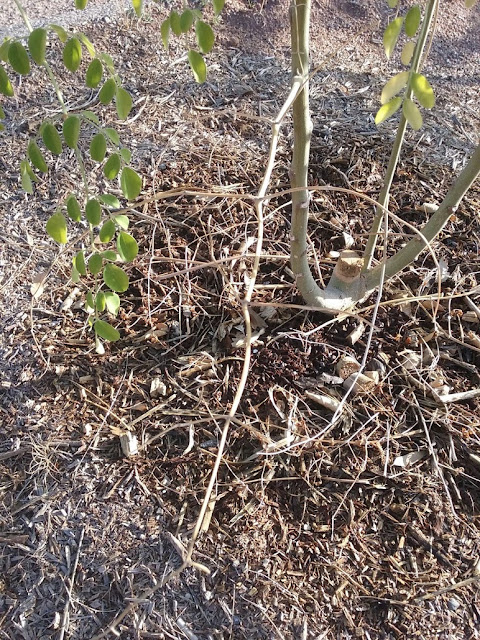 Oh, no! Déjà vu!  Closer inspection uncovered some dead branches. Our old friends the ants were back again wreaking havoc on one of our moringas. 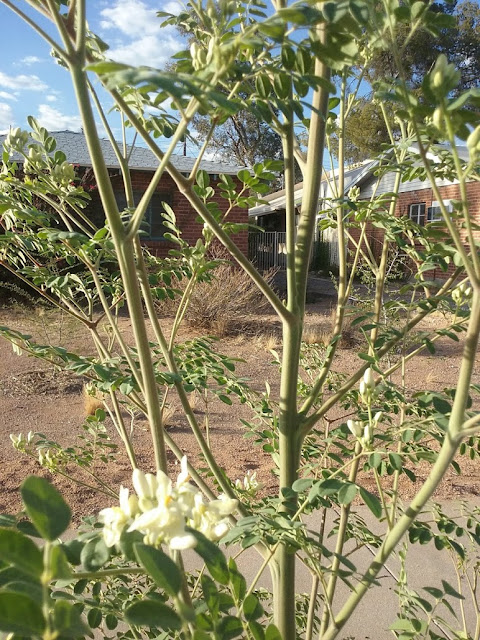 But right next to it, the morning sun shimmered on some budding blooms offering me a ray of hope.

The effects of Bud's downpour on our desert landscaping caused a roller coaster of emotions! 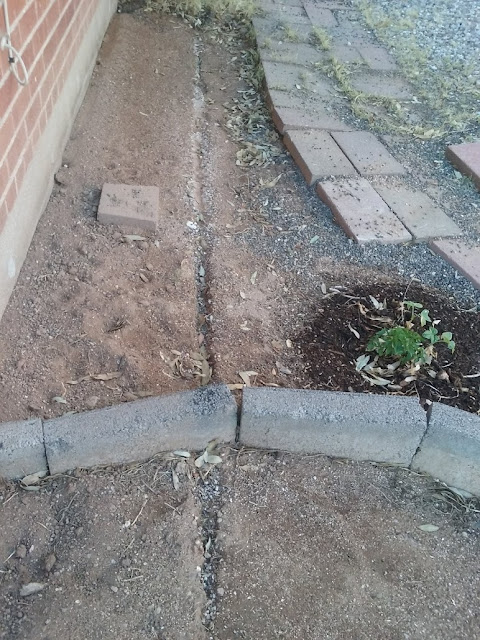 While watering the young chiltepin, grape plant, and Tombstone Rose, I spotted a line of erosion from the rain dripping off the roof. Before monsoon season starts, Dan really needs to install gutters leading to water barrels to redirect and save that rainwater!  Funny, I never noticed a line of erosion before Dan dug out the Burmuda grass. It seems that the elaborate root system of the die hard grass prevented erosion. 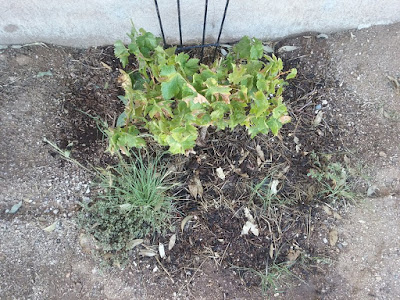 Click on the photo above to see how the little patch of mulch and weeds (native grass and purslane) interrupted the erosion seen on either side of grape plant. (Note: Dan advised that you wouldn't want a big mound of mulch retaining water right up to the foundation of the house.) For the first layer of mulch I used clippings from the native grass I found in the front yard. I didn't worry about the seeds because I knew that the roots from the grass would work with the mulch to create a sponge to retain the water like it did in our street-side catchment basin. I was happy to discover that the sponge also helped prevent erosion. 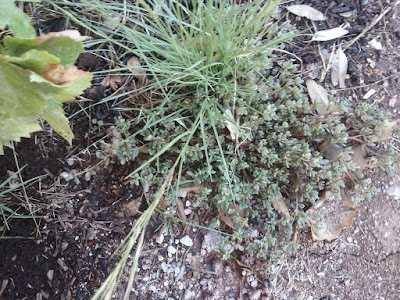 My daily watering was doing double duty by nourishing the edible purslane, too. Actually, it's doing triple duty since I planted some cowpeas to add nitrogen to the soil. 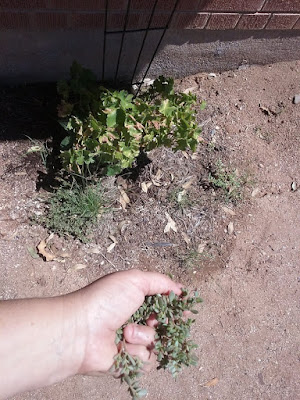 I have gleaned from this little patch of purslane three times - leaving the roots and some branches so it can grow back. And it did! Think I'll grab me a little snack now! Yum! Refreshing citrusy greens! (I wash it before I munch. At least I'm secure in the knowledge that there's no herbicide on the edible weeds in MY yard. Hear that city council!) 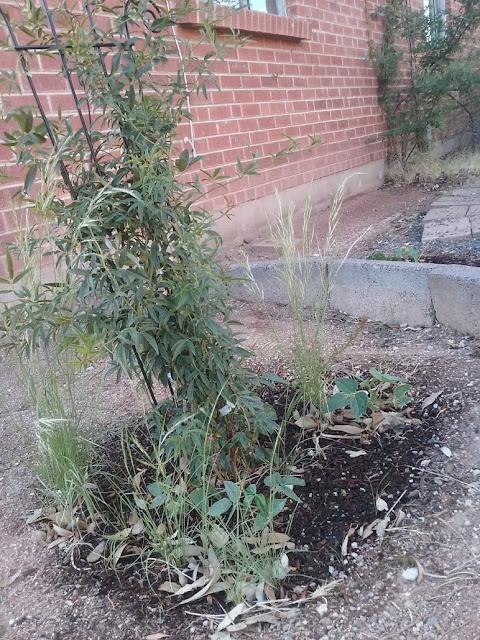 The nearby Tombstone rosebush is also doing well in it's bed of organic mulch, native grass and used coffee grounds. The cowpea seeds I planted to add nitrogen to the soil also help with erosion. 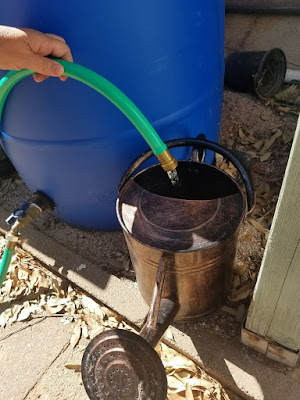 Now it's time to water the backyard edible forest with the rainwater collected in our blue rain barrels! 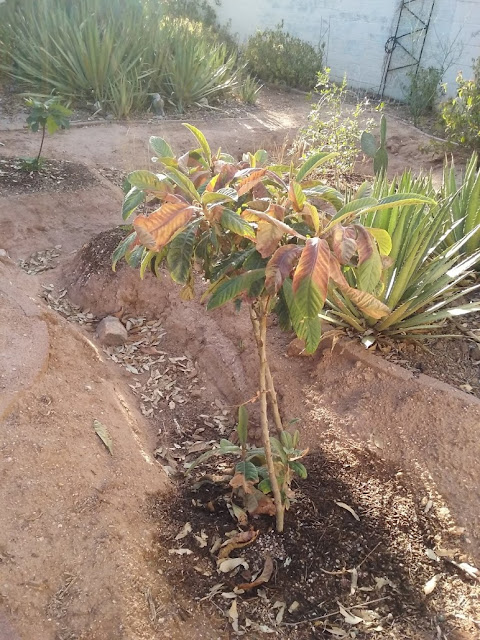 Unfortunately, the leaves of our loquat tree in the greywater basin got fried despite Josh washing some loads of laundry and dutifully hand watering it two times a day. Maybe I should have given the non-native waterhog more shade to survive the brutal June sun. Live and learn. 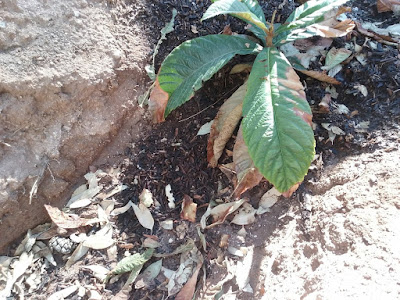 The walls of the basin also suffered some flood erosion near the loquat tree. 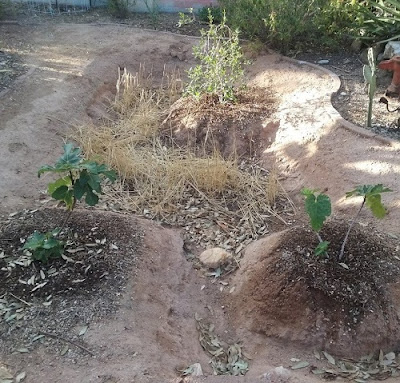 To be honest, there was already some erosion from the rocks Dan put in the greywater basin to slow down the flow. So many lessons learned! We really need more mulch in the basin. But the winter wheat we planted to infiltrate the floor of the basin is helping to prevent erosion and breaking down into mulch.

The heritage fig trees and pomegranate are doing great thanks to Josh for watering them and the welcome remnants of Hurricane Bud. Oh, the agony and ecstasy!
Posted by Jana Segal at 1:54 PM