Racing to get our cisterns installed before the monsoon storms 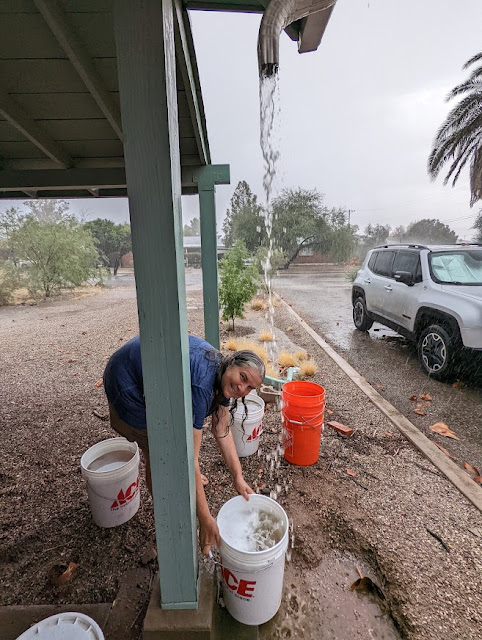 Dan and I have been anxiously awaiting the rain - while hustling to get our last two slimline cisterns installed to take advantage of the rain that falls on the Southwest corner of the house.

This happy moment has been a long time timing. It's been quite a process. It's taken years to get where we are. First, we had to dig up all the plastic and two feet of gravel from the yard and replace that with catchment basins covered with organic mulch and bunch grass. The catchment basins work beautifully to create rich soil and hold water for our native food forest.  But we also wanted to plant some heritage fruit trees in the back yard, so Dan set up a greywater system from our outdoor washing machine with its own basin. And then I started gardening, so we needed water for that. We started with two fifty-five gallon rain barrels and then added two cisterns (one using the water from our kind neighbors' roof).

It took a while to get the parts and for Dan to find the time to put in our final two cisterns. Last year, Dan optimistically put in the gutters and downspout. 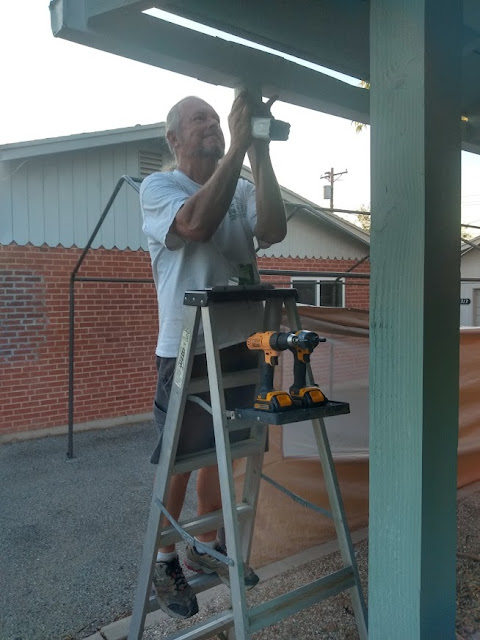 Dan finally managed to get all the parts he needed for the used cisterns and got to work cutting plastic piping, and gluing them together with PVC cement then installing baskets and covers on the cisterns. 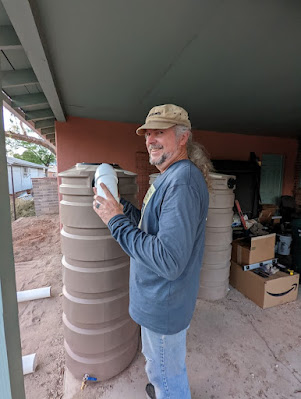 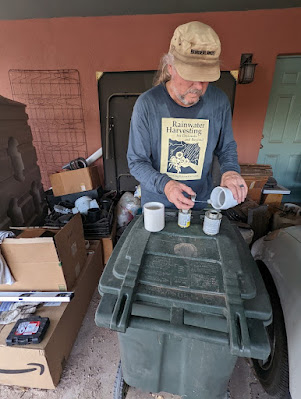 The next job was to level the ground where the cisterns would go.  Dan was racing against time to get the cisterns in before the monsoon storms. Unfortunately, he made an unexpected discovery. He found pavers hidden under the ground that he spent two afternoons digging up. 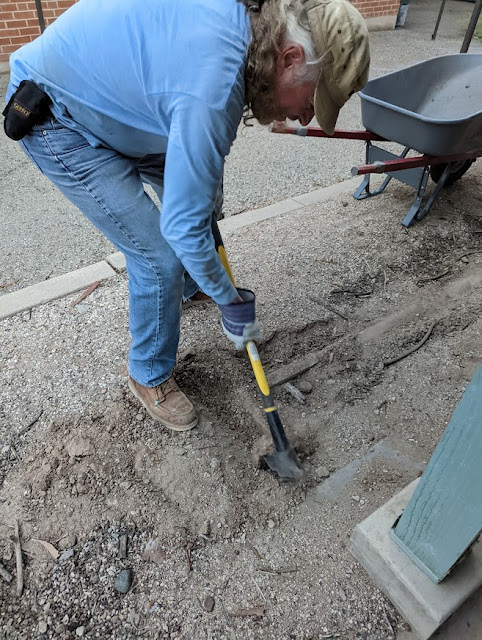 He didn't quite get them out before the first big downpour... We tried to catch what we could by putting buckets under the downspout.  After that bone dry June, we cherish every drop. 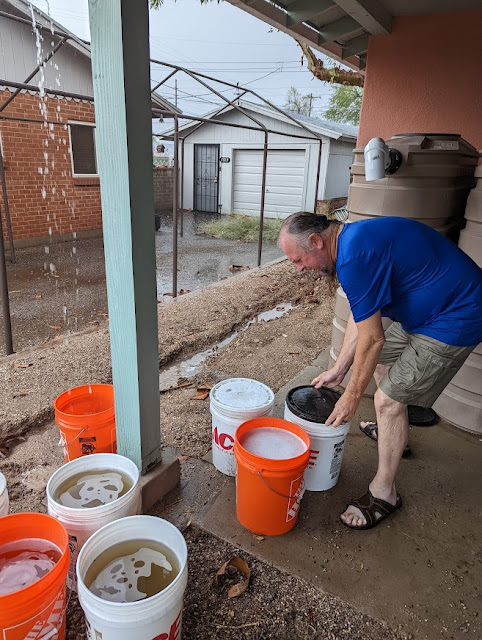 With our hot weather, it didn't take long for the ground to dry.  So Dan got right to work the next day digging out a base for the tanks. He made sure it was level and tamped to make the ground firm.

Dan gathered sand that had washed into the street from the nearby Arcadia wash. 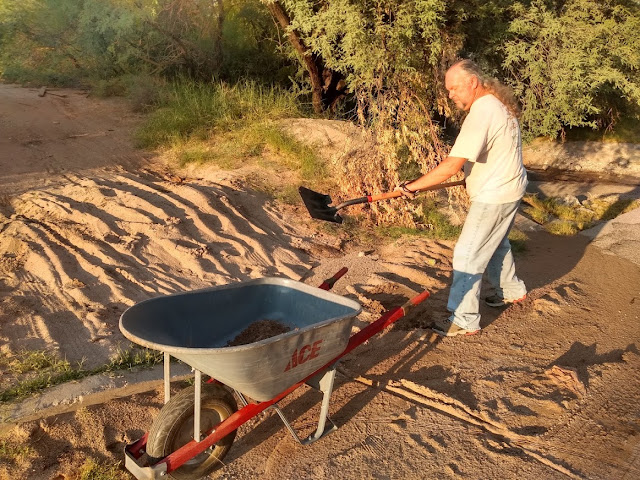 There were all these sprouting seeds in the sand, so Dan and I sifted through it to get rid of them and the sharp rocks and glass that might puncture the plastic tanks.
After spreading the sand out evenly over the hole, Dan made sure it was level. This is important so the tanks don't end up tipping. 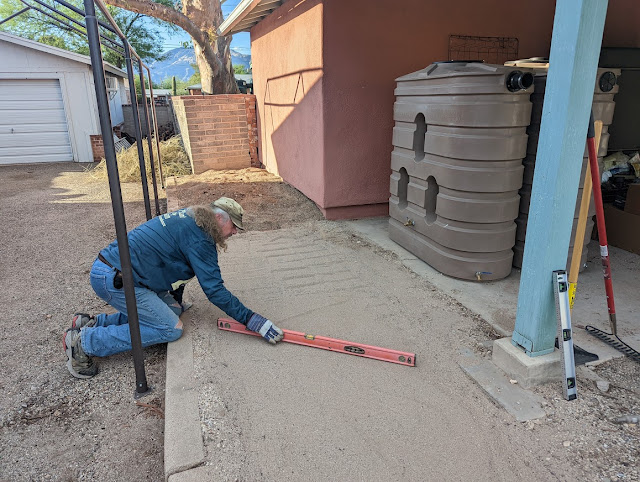 Dan had to hustle on the next workday. He was racing a possible storm. The wind was blowing hard. 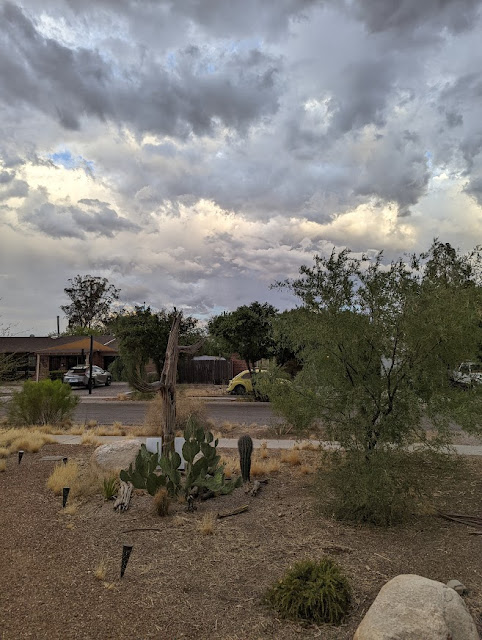 Dan had already cut and placed three PVC pipes across the base and was ready to roll the tanks in place when he found out one tire of the hand truck was flat. So he had to pump it up every time he used it. 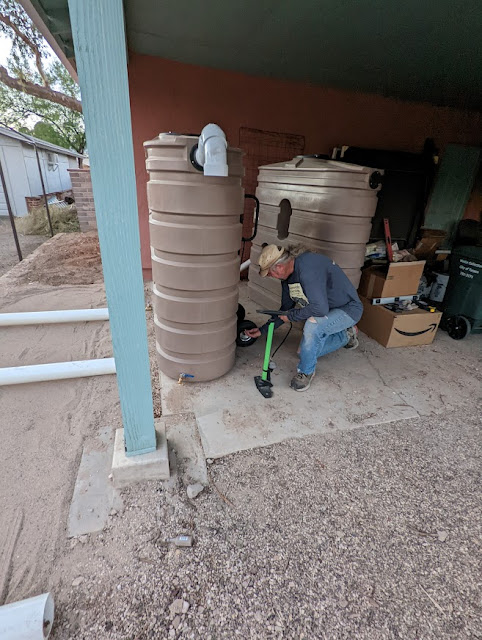 He used the hand truck to put the cistern on top of the PVC pipes (by himself!) 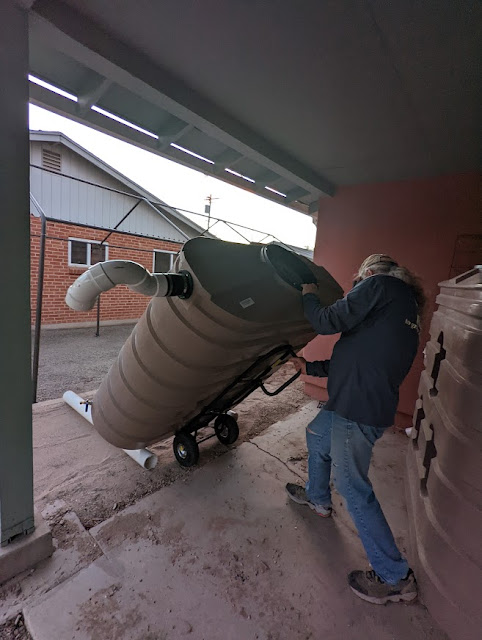 Then he rolled the cistern into place under the downspout. I finally got to help by pulling the pipes out as Dan lifted the tank.  He repeated that process with the other tank and made sure the tanks were level.  (He uses his level a lot!) 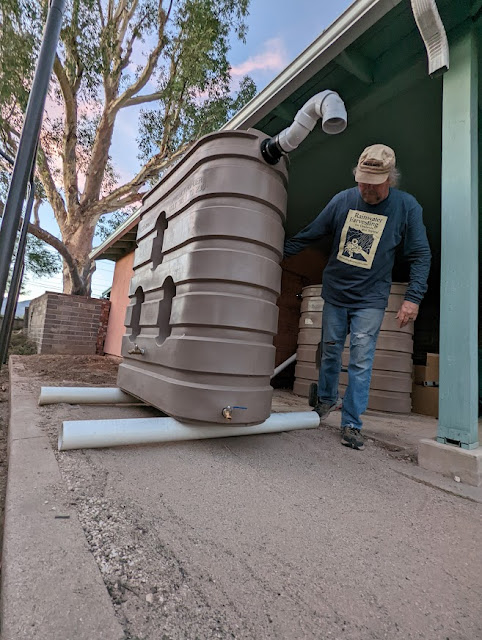 Dan put the two tanks together with the flex connector.  They lined up just right! Yeah! 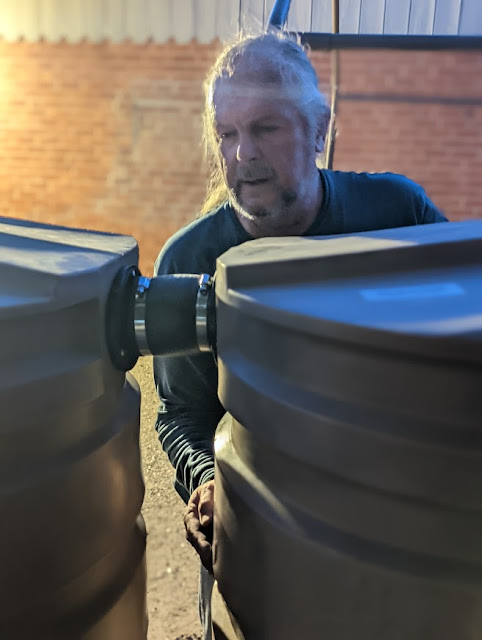 As the wind picked up, Dan changed the direction of the downspout to go over the basket in one of the slimline tanks. 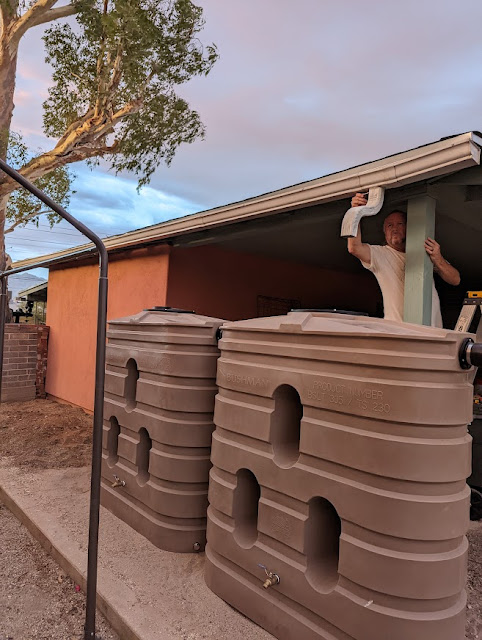 He added some length to the downspout to direct the water to the opening in the tank. 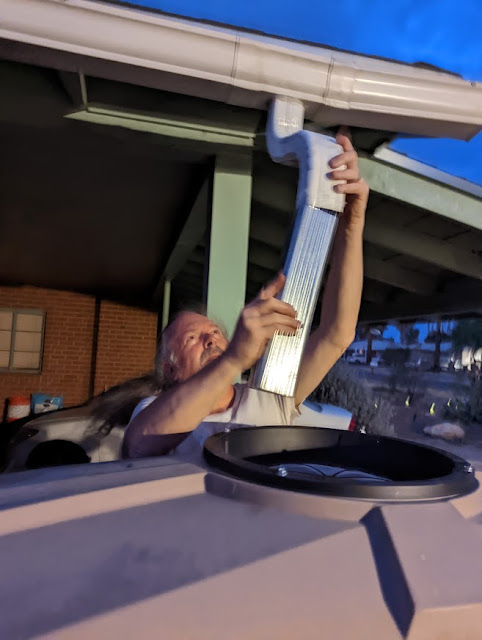 There were still some final touches to put on the tank (like a hose bib on the second tank) but it was getting dark. At least we would be able to get the rain from the impending storm.

But alas... it barely sprinkled that night.

The next workday, Dan raced to complete the job before the rain.

I'm so proud of my guy! He got the slimlines installed just in time to catch 3/10th of an inch of rain!

Needless to say, we celebrated catching all that rain! What a joyous day!