Tucson's Green Stormwater Infrastructure: An Example to Other Cities 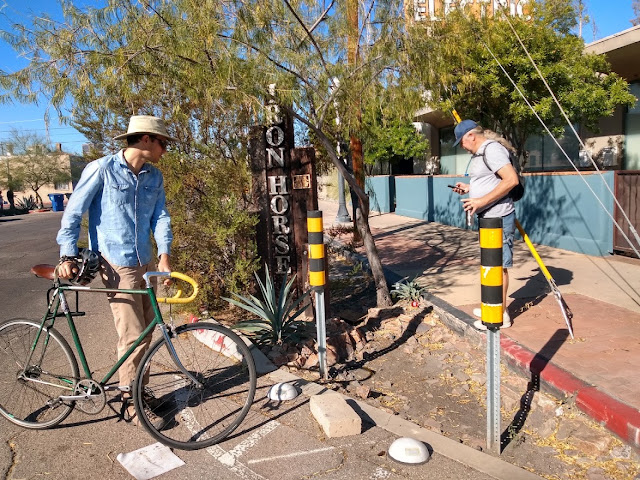 Tucson is known for many things: the heat, delicious Mexican food, lovely winters that attract snowbirds (and other birds), outdoor recreation, ranking 48th in school funding, and our friendly small town feel. We have a lot to be proud of too - from our biking trails (the Loop rocks!) to our City of Gastronomy designation.  It may surprise you that Tucson is also known for our innovative water programs. Tucson far surpasses Phoenix in water conservation and rainwater harvesting installations. Our Green Stormwater Infrastructure (GSI) program is still fairly new, yet it is already gaining a reputation as an example for other arid cities. 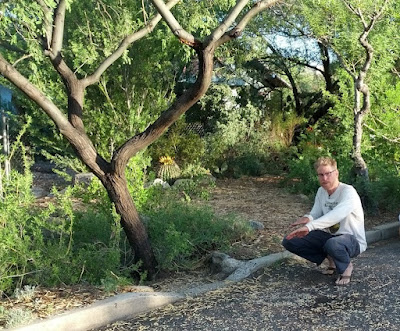 Brad Lancaster (who installed the first guerilla curb cuts in the now lush Dunbar-Spring neighborhood) has become a world renowned water harvesting champion. Brad and other water harvesting enthusiasts, including Watershed Management Group, advocated for the city's Green Infrastructure program. On September 4, 2019 the Mayor and Council approved the GSI Program Proposal!
GSI is any constructed landscaping feature that uses stormwater in combination with natural processes to perform ecological services. Those services include managing stormwater (to prevent flood damage), using rainwater to support shade trees and other desert plants to cool our city streets, create a habitat for desert critters and sequester carbon to fight climate change.
It is recommended that Green Stormwater Infrastructure be installed to irrigate many of the trees that are being planted as a part of Mayor Romero's #Tucson Million Trees program.
You may have noticed curb cuts directing street water into right of way basins with native plants...
Unfortunately, not all GSI installations are good examples.  A series of basins constructed on Stone Avenue had palo verde trees that fell over because they were planted in the bottom of the basin and got root rot. Live and learn. One of the first principles of rainwater harvesting is to observe how the system works and then adjust accordingly.
You may have seen some unsightly basins filled with trash and weeds. One of the issues with the basins is they need to be maintained. They tend to collect trash and invasive weeds like buffel or bermuda grass that block the entrance of the basin and prevent it from working properly.
The city is aware and is making strides in correcting the issue. On May 1, 2020, a new Green Stormwater Infrastructure fee was included on utility service statements for residents and businesses within the City of Tucson. 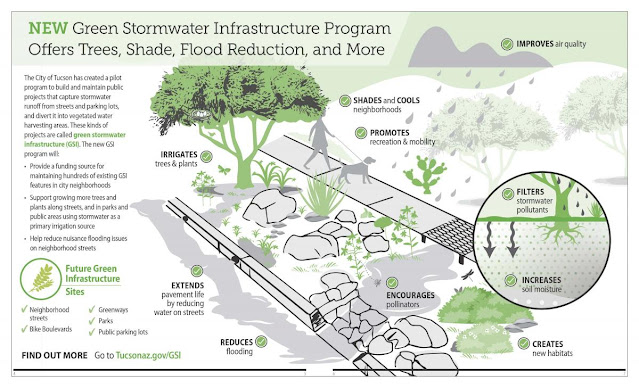 The city's new GSI Program will:
*Provide a funding source for maintaining hundreds of existing GSI features in city neighborhoods*Support growing more trees and plants on streets, and in parks and public areas using stormwater as a primary water source*Address and reduce flooding issues on neighborhood streets*Put rain/stormwater runoff to beneficial use irrigating plants*Reduce stormwater pollution*Shade and cool streets, sidewalks, bikeways, and parking areas*Beautify neighborhoods*Provide an affordable alternative to building and maintaining expensive underground stormwater infrastructure*
This fee is assessed based on customers’ water use at a rate of 13 cents per Ccf (about $1 per month for the average residential customer), and will raise about $3 million each year to build and maintain projects throughout the city that capture stormwater runoff from public streets and parking lots, and divert it into vegetated water harvesting areas. These kinds of projects are called green stormwater infrastructure, or GSI.
As I mentioned, one of the first principles of rainwater harvesting is to observe how the system works and then adjust accordingly. The city's new GSI system is no exception. There have been some incidents in which city maintenance workers (some outside contractors) weren't aware of how GSI systems work and have unwittingly harmed the system by removing vital native vegetation or over-pruning desert trees. This is very frustrating and disheartening for those who worked hard to install or maintain the systems.

I have attended Low Impact Development (LID) meetings where these issues have been discussed. The city reps listened to our concerns and are doing what they can to solve them. They are working on solutions that include setting up a monitoring system and implementing training for maintenance workers. Dan and I recently participated in both.

Here we are learning how to use the monitoring app on our cell phones. 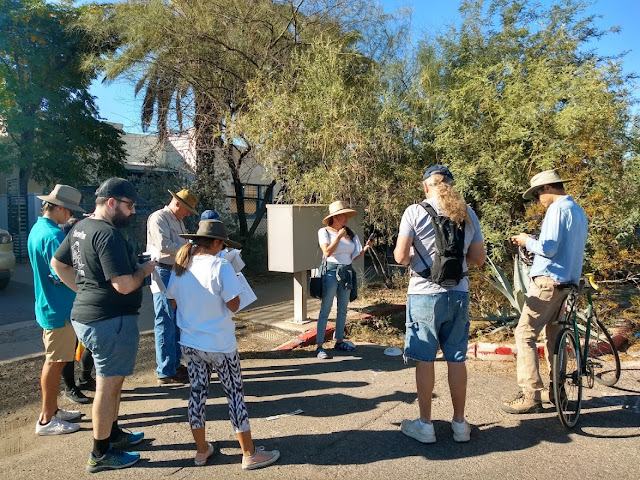 The apps were used to record the type of water harvesting feature (in this case traffic calming chicanes), inflow and outflow, whether or not the inflow is obstructed with sediment, materials it is made out of (rocks or mulch), the kind of vegetation, invasive weeds, if it needs maintenance.  There was also a place to post pics.
Dan took lots of pictures including this chicane that was overgrown with bermuda grass. 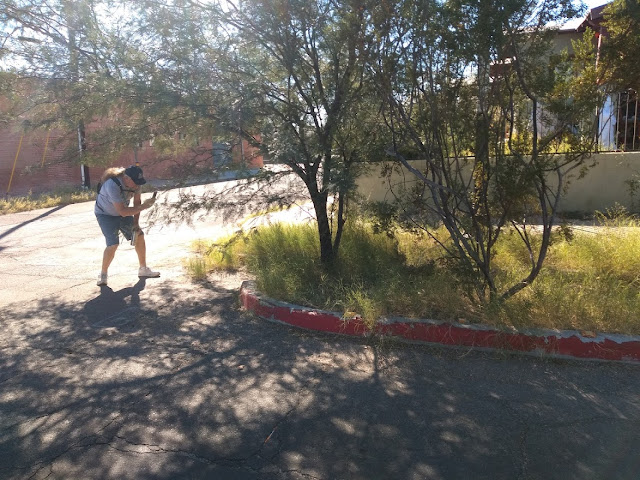 While Dan was busy taking pics,  I went ahead and picked up some trash. I felt that if we want to be a good example we need to leave the neighborhood better than we found it. 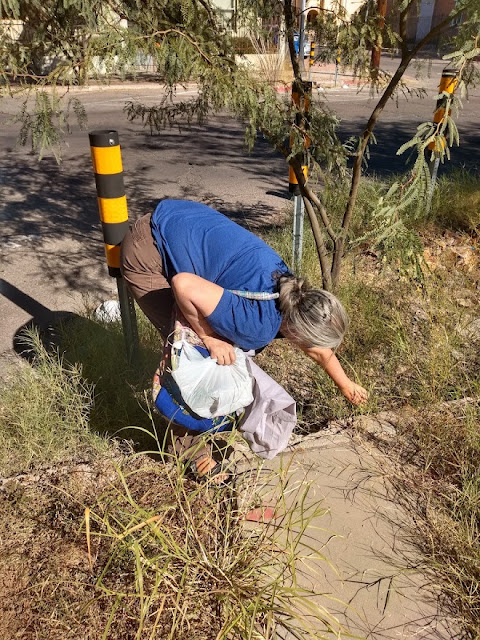 Dan and I spotted a lot of invasive buffel grass in the basins. I didn't want it to spread throughout the neighborhood, so I decided to pick what I could out by the roots. It was pretty easy to pull out in the soft basin soil. I was careful not to let the seeds disperse since that would totally defeat the purpose, right? So I carefully broke off the stem below them (see pic below) and placed the seeds in a plastic bag I found nearby. Then I sealed the bag tight so they won't fly out when the trash truck picks it up.
If you decide to do this kind of work, it's recommended that you wear protective clothing like closed toed shoes, a shade hat, light weight long sleeve shirt, long pants, and gloves. (I know. I know. I didn't. But I wish I had.)  Also be mindful of your surroundings, especially traffic. 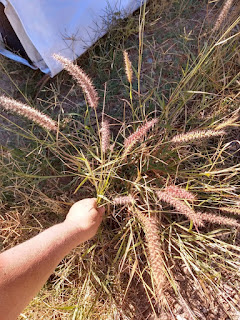 While we were checking out one basin, I got a nice surprise. I found some volunteer sorghum. I went ahead and gleaned the seeds to plant in our greywater basin. We've found that sorghum (from the birdseed the squirrels planted in our yard) helps the water to infiltrate better. Not to mention...the birds like it! 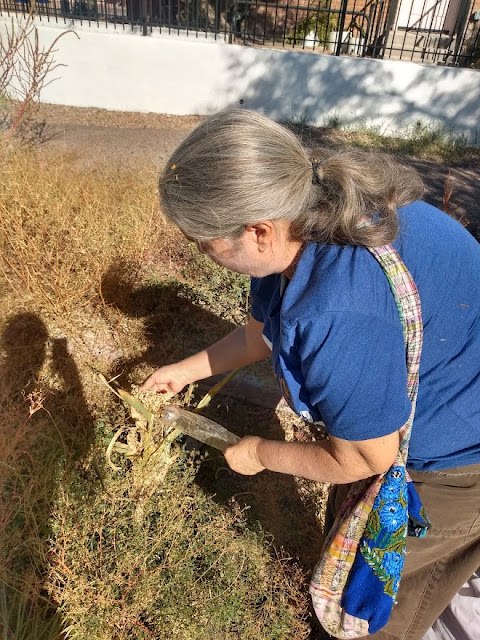 It was great seeing city and county employees (including those from Tucson Water) who had rallied for Green Infrastructure join interested citizens (like me and Dan) on a Saturday morning to see how our green infrastructure is doing.  They really do care! 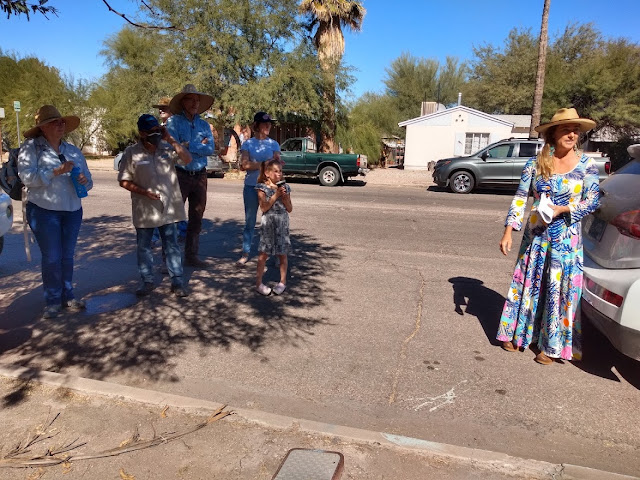 And they didn't just leave it there.  After recording the needs of the GSI, the city held excellent maintenance training that included how it works, how to identify useful native plants vs. invasive, and how to properly prune (or not prune) desert trees.  Attendees included city workers, landscapers, U of A maintenance personnel and even some interested parties from New Mexico and Mexico!
Makes me proud to be a Tucsonan!
More Information:
For the Love of Tucson: Creating a Desert Oasis to Combat Climate Change
Posted by Jana Segal at 2:13 PM