Why We Love Our "Weeds" 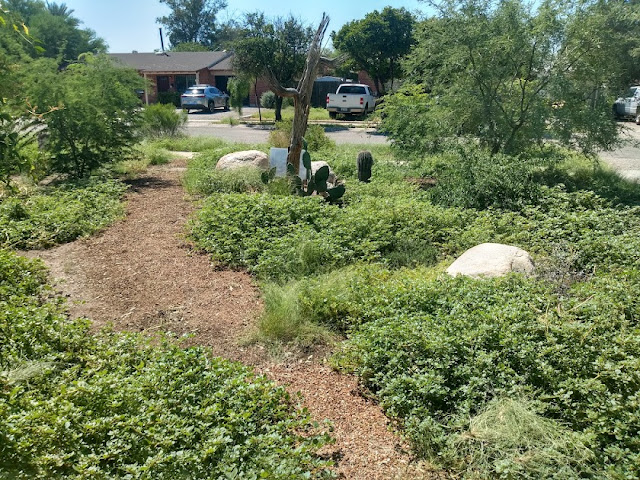 When we came home after an 11 day vacation we were amazed how all that rainwater had transformed our front yard into a glorious habitat for pollinators and birds as well as a productive edible forest! 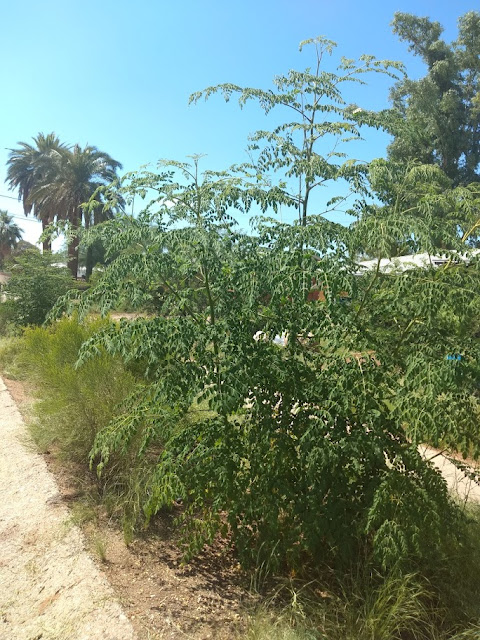 The moringa trees  in the street side basin were HUGE - even the one that we thought had died in the freeze.

Our native trees - that we didn't water during the excessive heat warning -  had not only survived but were full and leafy.

The desert hackberry had lots of berries on it for the first time ever. 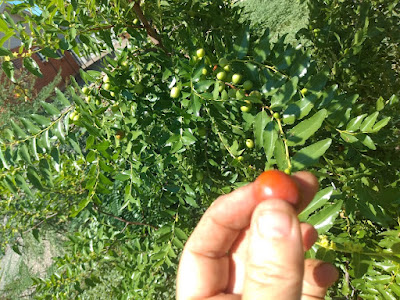 The small jujubes in another basin were twice their size and the big one was loaded with fruit, some of it ripe and ready to enjoy!

The whole yard was covered by beautiful horse purslane and native grasses. (I had long since eradicated all the goat heads and other sticker weeds.)   I was concerned that some neighbors with gravel covered yards might call it a "jungle" overgrown with weeds. So the next day I was out there pulling the purslane and the poisonous spurge covering our walking trail.   I wanted to send a message to the neighbors that we had left those weeds there on purpose. I also uncovered some decorative cactuses and wild flowers. I pulled any weeds that were encroaching on the neighbor's yard or on the sidewalk. We try to be good neighbors.

While I was out there, I saw pollinators flying around (lots of butterflies, a spectacular moth, wasps, and ants.) As I pulled out some yellowing purslane, I discovered a caterpillar on there. 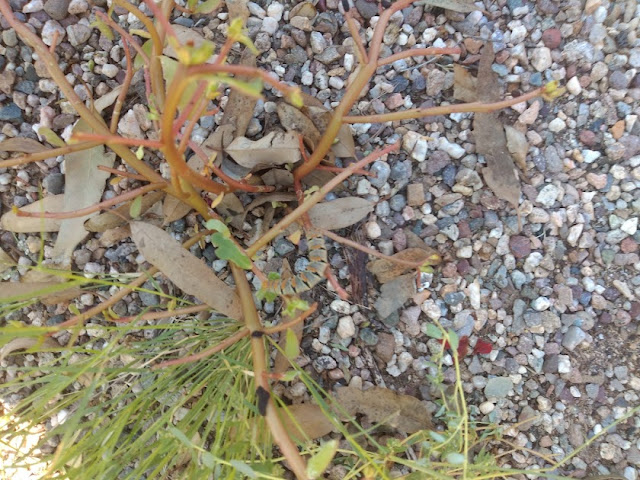 It was loving the purslane. When I was pulling out the spurge, I saw a trail of little ants going after it. I considered leaving it for them. After all...isn't it better to have them go after spurge than my trees? 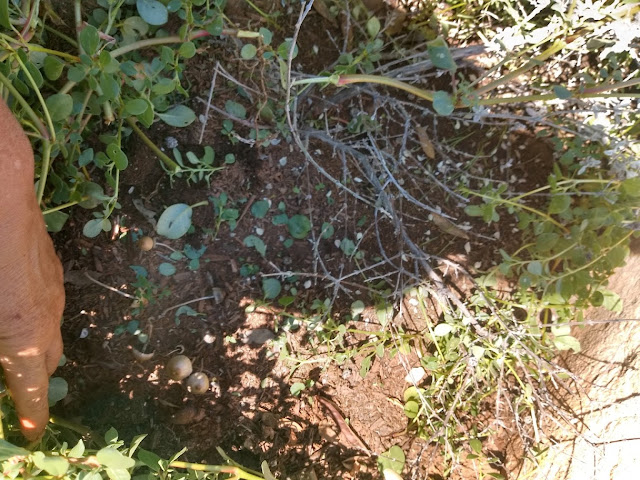 I inspected the soil under the purslane by the butterfly bush and I found a little caterpillar and the mushrooms! I was pleased to see that the weeds were nourishing the soil!

Just when I finished posting the caterpillar pic, a storm raged in. 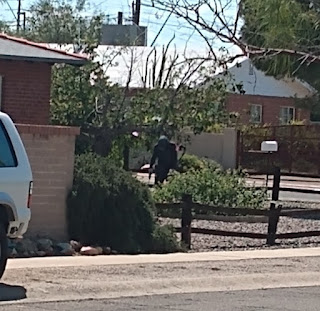 This development changed the direction of my story from the frustration I felt when two neighbors sprayed roundup this afternoon. Though I did watch water flow from one of the sprayed areas into the little patch of land where Dan likes to plant a three sisters garden.
And rain from the yard pictured on the left flows all the way down the street to the median where Dan wants to organize a neighborhood garden. The landscaper got the Roundup sprayed just in time to share it with the whole neighborhood. Yeah, yeah...I had to say something.

But I'm excited to transition to a happier ending.  Documenting the effects of the raging storm on our catchment basins is a great chance to show how the native grasses and horse purslane help prevent flood damage. Check it out!

See how the native grasses slow down the water to prevent erosion and hold in the water in our street-side basin that is home to our precious moringa trees. 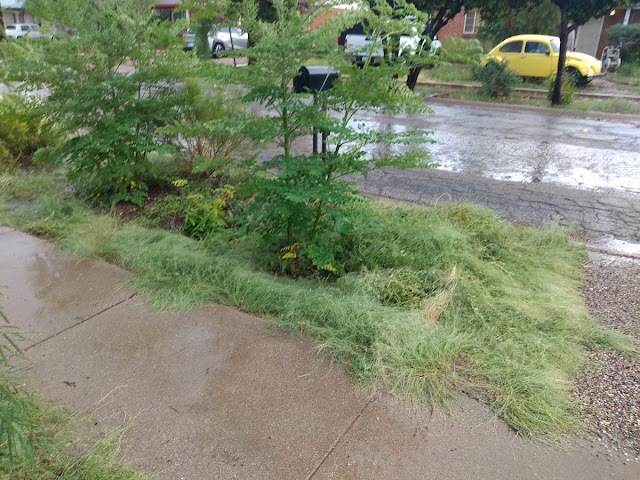 This picture shows how the native grasses slow down the roof water rushing from the downspout before it hits the smallest jujube tree. Then the horse purslane slows down and sinks in the water before it hits the last two trees. Those so called weeds help nourish the soil and attract pollinators to the flowering trees. 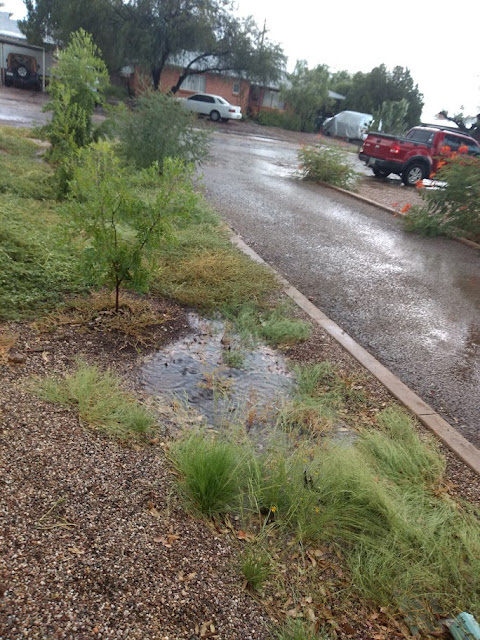 Clearing out the horse purslane on the path allows us to see how the water pools in around the path and then how well it sinks in soon after the rain stops. Dan dug the shallow basin so it slows down, spreads out and sinks in the water (a rainwater harvesting principle). The native grasses and purslane help it slow down and sink in too! 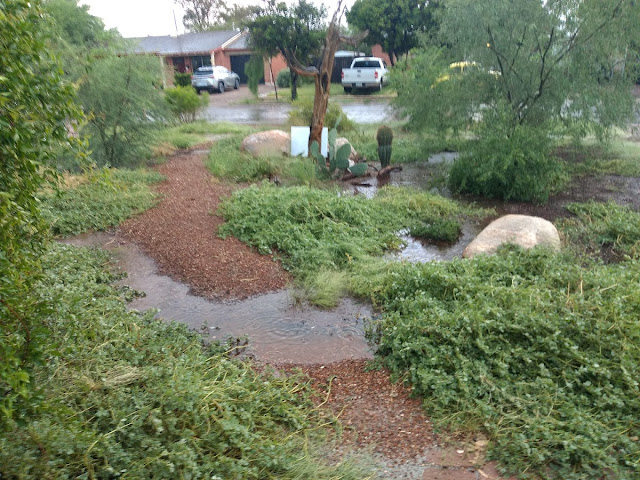 So you can see why Dan and I love our "weeds." They help to make our basin work properly. And we think they are beautiful.