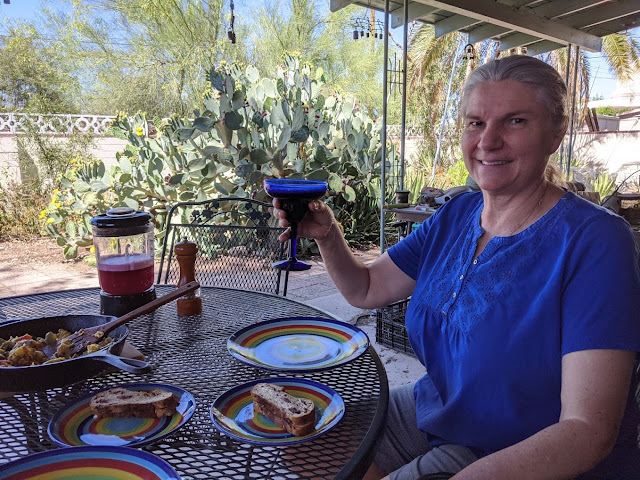 You can identify this variety by the yellow flowers, pink and burgundy fruit and the new beaver-tail shaped pads with little curved conical green leaves. 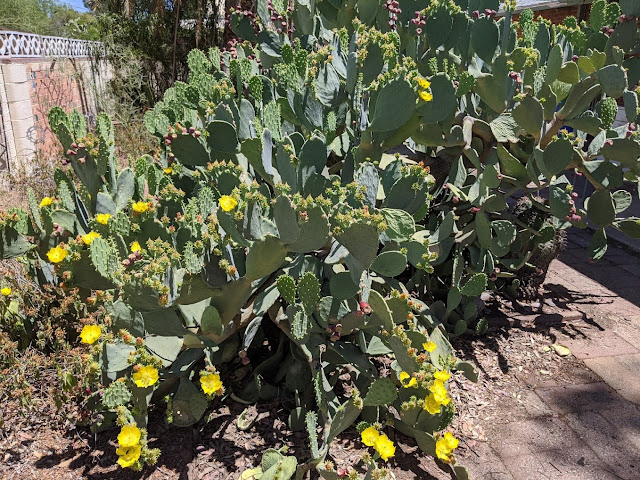 For the past few weeks Dan has been harvesting the ripe, burgundy colored fruit and making delicious prickly pear syrup. You can watch our "how to" video here.

Meanwhile, I have been harvesting our nopales and preparing them for breakfast and snacks. This has come in real handy since we aren't going to store as often in an attempt to avoid the crowds during the pandemic! We don't really have to tend the cactus like I do with our other edible plants. Though Dan occasionally dumps some kitchen rinse water on them when they are looking really desiccated.

Lately I have been harvesting the new pads. FAIR WARNING: the word "Spineless" in the name is misleading since under the curly leaves are white spots with tiny spines that can stick to your fingers or tongue if you're not careful. I got one in my finger that was irritating me to no end last night. The younger pads are darker green and smaller (averaging 5 inches) than the older pads that appear spineless. The older pads are tougher and not as tasty.

Here's how I prepared the pads...

First, I put them in a plastic bowl to keep them from moving around as much. I hold them still with salad tongs as I scrape off the leaves and those sneaky spines under the leaves.  I found it easiest to use the grill scraper we had in a bbq kit. You can also scrape them with the blade of a knife - but then you can't use the bowl to control them. 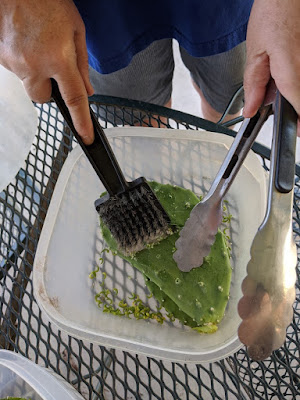 Next, I rinse off the spines with water and and pour it out over on the cactus. (We try not to waste water since we live in the desert.) 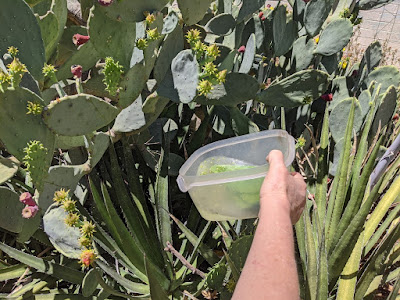 I found that the spines on the edges of the pad are difficult to scrape off, so I use the salad tongs to hold down the pad while I cut off the end and the sides of the pad. 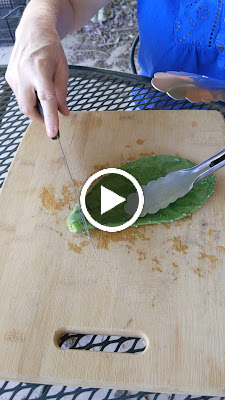 Then I cut them into pieces. 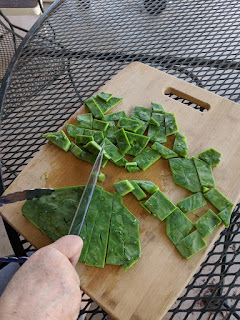 Finally, I rinse off the nopale pieces to get rid of the rest of the spines and to rinse away the slime. Notice that I am doing it outside to keep all the spines out of my kitchen. 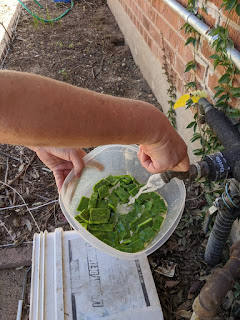 I don't like to waste anything, so I pour the slime water around my potato plants. I hope they like it. 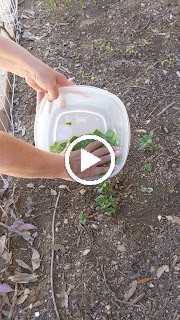 These pods produce a lot of slime. (Think "Ghost Busters.") They need to be rinsed off several times until most of the slime is gone or you lose patience.

Then I dice an onion and saute it with the nopales.

You can eat them like that on a tortilla. But we added tomatoes, potatoes and eggs to make a yummy scramble. I microwaved a potato while I was cooking the nopales. When the nopales were cooked (tender and lighter in color) I  removed them from the skillet, added a splash more olive oil, and fried the potatoes. I added the nopales and chopped tomatoes, scooted them to one side of the pan and scrambled 3 eggs on the other side of the pan. Finally, I stirred it all together.

Meanwhile, Dan blended some prickly pear syrup, lemon lime seltzer and spiced rum to make a prickly pear cooler to have with our nopales scramble. We enjoyed a yummy brunch on the patio with a lovely view of hummingbirds pollinating our prickly pear blossoms. More fruit to come! 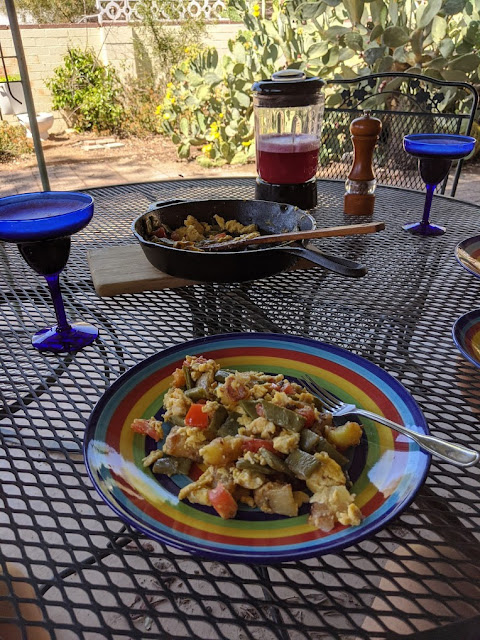 Now that's what I call stewarding in place!
Posted by Jana Segal at 7:24 PM