The distant rumble of thunder gave us a smattering of hope that the much needed monsoon had finally arrived. But after a few sprinkles, the clouds rolled on. Such a tease! The fickle rain tickled another neighborhood instead.

You know it's bad when your cactus can't hack the heat!  Even the decorative metal animals seem fatigued. (Or is it just me?)


I know, I know...I heard. The monsoon will be late this year.

"The weather systems that kept the area cool in the spring also suppressed high pressure from moving north into the Four Corners region that brings the necessary heat to build monsoon storms in the area. A thunderstorm requires moisture and heat. Without heat to combine with the moisture, thunderstorms won’t come to Southern Arizona until later in the summer, as the high pressure starts to slowly move north," announced meteorologist Jeremy Michael. 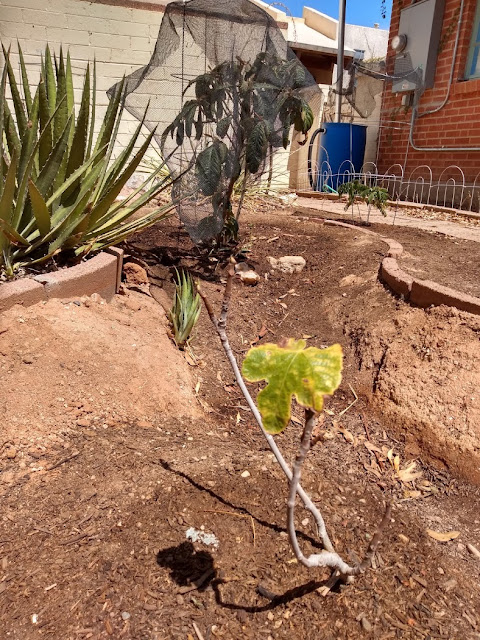 Is Jeremy saying it's not hot enough!  Despite extra mulch and water, this "drought tolerant" heritage fig is down to it's last leaf!

The long hot summer (yeah, I know it's early July) has taught me a thing or two - like maybe those baby figs need some shade covering like the loquat in the background.

And it taught me to be resourceful....

As a result of the late monsoon, I was disappointed to find no purslane growing in our alleyway.  (It usually requires 2 or 3 downpours to sprout.) But I did notice purslane popping up by the emitter at a certain Korean restaurant in our neighborhood. I grabbed a handful of these edible weeds by the roots. I always wash purslane over a bowl so I can pour the little black seeds where I want them to grow in my yard. 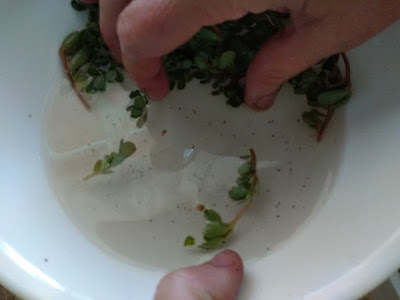 So after enjoying the yummy leaves and stems, I planted those seeds and the roots in the basin by our loquat tree.  I figure while I'm cooling off our thirsty loquat, I might as well get double duty out of that water. While I was at it, I went ahead and soaked some beans and planted them there to put nitrogen in the ground. Six beans sprouted. There's one left after the lizard had it's share. Here is what he left of the purslane... 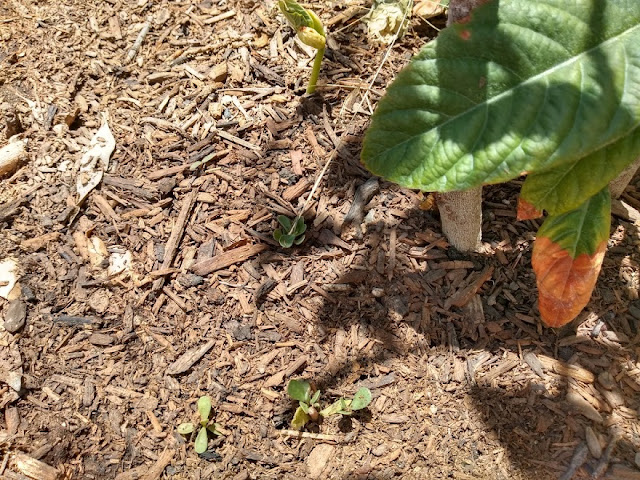 As my bare feet sizzled in the morning sun, I decided I had to do something for the poor bees and birds. I set up a makeshift birdbath - a tomato cage holding a Pyrex pie pan.

But it was so hot! I was afraid the clear Pyrex might act as a magnifying glass and start a fire - or at least heat up a scalding bath.

My solution was to purchase a metal plant stand ($20 at Ace) and a terra cotta clay pot bottom ($10.)  I re-purposed some spiritual message rocks (from a super-loud meditation fountain that an ex-boyfriend got me) to place on the bottom for bees to rest on while they drank. Success! The terra cotta pot keeps the water nice and cool.


On the bright side, the heat showed me which plants were really drought tolerant. If you look past the dying cactus, you can see that our desert-adapted heritage pomegranate is hanging in there nicely. (It does get more shade than the figs...)  Our Hummingbird Trumpets are surviving on just dishwater! Dan's Charlie Brown mesquite tree is flourishing without any extra water. (See last pic below.) And our moringa have come back (after dying in the deep freeze). Some of the bottom leaves have yellowed. Perhaps they are using their resources to support the new blossoms?!

Note: I put our daily coffee grounds around the trunk of the moringa to keep away the ants - that like to come out especially after it rains! 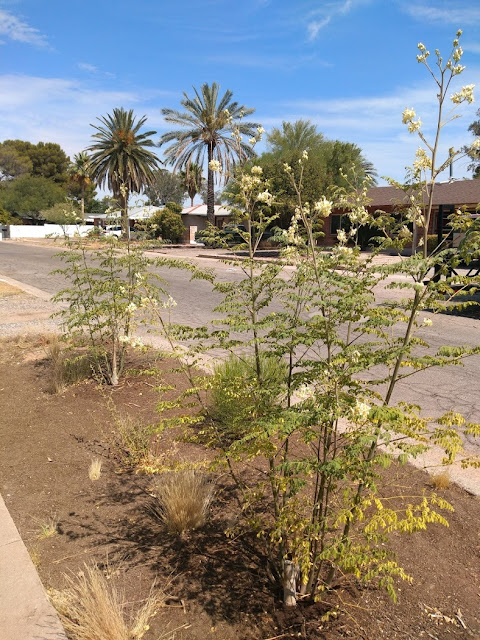 Another benefit...the delayed monsoon gave us plenty of time to prepare for planting the rain.

With only a straw sombrero to shield him from the sun, Dan spread out the last truck load of mulch in our front yard basin. 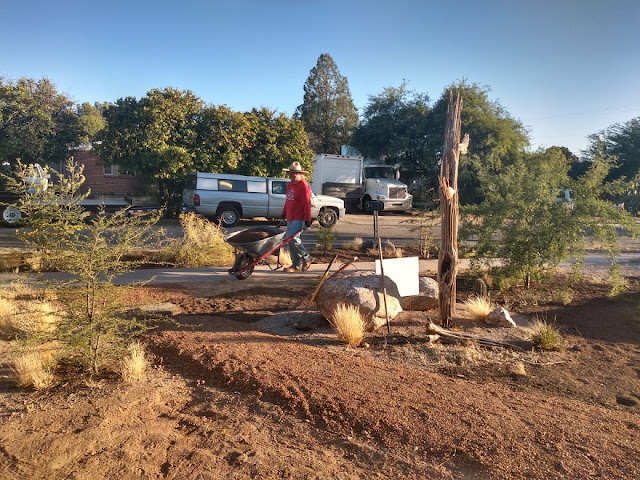 Find out how our completed catchment basin fares in the coming downpour.
Posted by Jana Segal at 11:42 AM