What's Up with the Proposed Rosemont Mine?

Construction of the mine in the Santa Rita Mountains southeast of Tucson is now delayed for up to 18 to 24 months until the 9th U.S. Circuit Court of Appeals can rule on an expected appeal by Rosemont Copper and the U.S. Forest Service, which approved the project in June 2017.


U.S. District Judge James Soto heard oral arguments Tuesday on several cases related to the Rosemont Copper Mine, including a request by mine opponents for a preliminary injunction to halt construction until all other court cases challenging the mine are decided.

The main disagreement at the preliminary injunction hearing was whether the Army Corps of Engineers has the responsibility and authority to regulate downstream secondary and cumulative impacts from dredge and fill operations on the mine site.

Attorneys for tribes and environmental groups who oppose the mine argued that the agency has that authority. They argue that when the Army Corps of Engineers granted the mine's 404 permit under the Clean Water Act, it didn’t adequately analyze related impacts, including dewatering and polluting nearby water sources.

The attorney for the Army Corps of Engineers disputes that claim and says the Forest Service is the main regulatory agency for the mining project, and pointed to proposed mitigation for those impacts on Sonoita Creek.

Opponents also criticized Rosemont and the Army Corps of Engineers for insufficient public notice and financial guarantees on the mine project.

Save the Scenic Santa Ritas, the Center for Biological Diversity, the Arizona Mining Reform Coalition and the Sierra Club Grand Canyon Chapter have filed suit against the Army Corps of Engineers over that 404 permit. In April, the Pima County Board of Supervisors voted to back the lawsuit.

The Tohono O'odham, Pascua Yaqui and Hopi tribes oppose the project over concerns it would damage ancestral homelands, and have filed a lawsuit challenging the Forest Service decision to approve the final environmental impact statement for the mine.

District Judge Jame Soto made his decision on the injunction on July 31, 2019.

Let's keep up the momentum...

Rosemont takes steps to get past ruling that blocks mine - Arizona Daily Star, October 27,2019

US to appeal ruling that blocked Rosemont Mine -ARIZONA DAILY STAR, December 29. 2019

Latest Rosemont Mine ruling a partial victory for the jaguar in Arizona - Tucson.com, May 11, 2020

What can we do?

Please, write a letter to the editor telling how the Rosemont mine will personally impact you, your business or your family. Be sure to follow the guidelines and word count limit of the target publication (up to 150 words for the Arizona Daily Star.)

This is a good time to urge our Members of Congress to overturn the 1872 Mining Law (that got us into this situation by defining hard-rock mineral extraction as the “highest and best” use of most public lands, tying the hands of federal and local governments when U.S. or foreign mining interests want to mine our public lands). Also to codify the Waters of the US Rule into law (so any sitting president can't change it at will.)

In the following blog is the information I presented to Rep. Kirkpatrick:

October 23, 2019. WASHINGTON, D.C. -- The US House of Representatives today passed legislation to finally reform the Mining Law of 1872. The legislation provides the first update to the mining laws since the time of pick and shovel miners.
https://www.sierraclub.org/press-releases/2019/10/sierra-club-praises-passage-hardrock-mining-reform


Important information to help fight the Rosemont Mine can be found here:

If you’ve been looking at the newspaper, you may have seen an op-ed from the Tucson Chamber of Commerce saying that it is time for us all to stop “fighting” and for the Rosemont mine to start. That was followed by a number of letters to the editor that clearly explained why the mine is a really bad deal for southern Arizona.

At Sustainable Tucson's October 9th meeting, Gayle Hartmann, president of Save the Scenic Santa Ritas, gave us an update on what is happening and what is likely to happen in the near future. It isn't a done deal. Several organizations including Save the Scenic Santa Ritas, the Sierra Club, the Center for Biological Diversity, the Tohono O'odham, Yaqui, and Hopi nations are suing the mine. They have an excellent case. 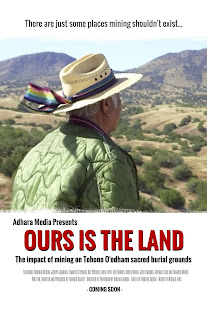 Filmmaker Frances Causey also screened her documentary about the Rosemont Mine:

“Ours Is The Land” is a short film that depicts in moving and powerful detail the spiritual, cultural, and physical connection of the Tohono O’odham people of Arizona to Ce:wi Duag or the Santa Rita Mountains which are imperiled by the proposed creation of the mile-wide, half-mile deep Rosemont open pit copper mine. Desecrating this revered area with a mine would fundamentally alter the cultural landscape of the Tohono O’odham nation.


What I learned from this presentation:

The proposed mine will be built in one of the most biologically diverse regions of the country.  Ecotourism is a big boom to our 23 billion dollar tourist industry. Birdwatchers come from around the world to enjoy it. If the mine goes through, tourists will get a clear view of the huge, gaping pit as they drive down scenic highway 83. The economic impact of the 400 jobs that the mine will create won't begin to equal even 1 % of what ecotourism brings to our state economy. The mine is expected to be in operation for 20 years, but the devastation to the region's diverse ecosystem and our water supply will last for hundreds of years.

Impact on our water supply: The mine will be nearly 1 mile deep -  below the level of the aquifer and the ranchers' wells. That same aquifer provides Tucson with 20% of our water.  And the toxic tailings will end up in our water. When the mine stops running it will become a huge toxic lake.  The Rosemont mine has been formed into a limited liability company - so they will leave it for tax payers to clean up. We have an antiquated law in Arizona, the 1872 Mining Law,  that allows mines to use as much water as they want.  All this during a drought that has drastically reduced the water level in Lake Mead where we get our CAP allotment.

The documentary "Cyanide Beach" tells how the directors of the Rosemont mine were also on the board of Augusta. They promised the people of Sardinia, Italy that they would clean up the poisonous tailings left from their open pit gold mine, but instead they left a toxic lake that threatens the town's water supply.

According to Edward Manuel and Richard Elías:

"For the greater community, including Tucson, Hudbay expects to remove up to 18,500 acre-feet of groundwater from the mine site before actual mining would begin. Based on an estimate of 108 gallons of water used per person per day, that’s enough water to serve the average person in Tucson for 56 million days! Remember, this is what must be pumped before Hudbay can even start mining. It does not include the long-term groundwater pumping needed from the wells near Sahuarita for the 20 years or more of mining operations. Nor does it include the loss of groundwater that will seep into, and then evaporate from, the mine pit, forming a toxic pit lake that will never be remediated.

The Rosemont Mine would involve massive earthworks, thereby impounding mine runoff in new places where water will seep into the ground. With Tucson downstream of the mine, is the Corps really confident that impounding water in the toxic pit lake and runoff on top of fractured rock will not lead to pollution of our community’s aquifers? There is no plan and no money for addressing dam breaks and pollution of streams that feed the Tucson water supply."


If writing Rep. Kirkpatrick you might want to thank her for:
In the letter, Grijalva and Kirkpatrick, both Democrats, requested the Corps provide the Natural Resources Committee extensive documentation about the decision-making process being used by the Corps in determining whether to issue a Section 404 Clean Water Act permit for the mine. They also requested a meeting with the Corps prior to it publicly announcing its permitting decision.

Grijalva and Kirkpatrick met with Corps officials on Feb. 28. After the meeting, they issued a joint press release stating that the Corps is set to issue the crucial permit “without full consideration of the facts.”

“We both believe critical questions remain unanswered, including whether there has been adequate review under the National Environmental Policy Act,” states the joint letter signed by Grijalva and Kirkpatrick. “We’re going to pursue every avenue to ensure Rosemont is handled transparently, and we will be conducting additional oversight of this project.”

UPDATE: Congresswoman Kirkpatrick and Congressman Grijalva have joined forces to take the Army Corps to task for their decision. Raul chairs the Natural Resources Committee and Ann sits on the Appropriations sub-committee that determines the Army Corps appropriation. They have some leverage in those roles.

Forest supervisor says her boss ignored critical questions about Rosemont Mine - Arizona Daily Star, August 17, 2019
And the bad news is...

On August 30, 2019 Hudbay filed a motion with the court to reconsider parts of the ruling it issued in July. The motion describes areas where Hudbay believes the court inappropriately assumed the responsibility of the regulators and misinterpreted current mining law and regulations. The motion requests that the court amend the judgement and remand Rosemont’s Final Record of Decision to the Forest Service for additional investigation or explanation while leaving the FEIS in place during this time.


“It is our belief that the court went beyond its authority and jurisdiction, by conducting its own validity assessment of Rosemont’s unpatented mining claims.” said Andre Lauzon - Vice President, Arizona Business Unit. “Last week’s filing is our first step in the appeals process and correcting what we believe is a misinterpretation by the court of the current laws and regulations that govern mining activities on public lands throughout Arizona and the United States.”

Rosemont Copper Co. asks judge to junk or amend ruling that stopped mine - Arizona Daily Star
September 4, 2019
More information and UPDATES on the Rosemont Mine:

Rosemont preps appeal of July ruling that blocked construction - Dec. 21, 2109
Pima County Board of Supervisors Memorandum on the Army Corps of Engineers approval of the Rosemont Copper Project.

Manuel and Elías: Rosemont mine would bring devastation to Southern Arizona, Dec 9, 2018

UPDATED: Rosemont mine project is a go; Rep. Kirkpatrick weighs in - Updated March 22, 2019

In a land of wild cats and scarce water, a battle over mining heats up - National Geographic, April 25, 2019

Ask Members of Congress to Co-sponsor the Save Oak Flat Act
Posted by Jana Segal at 7:24 AM