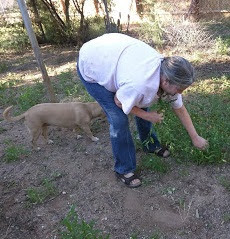 Just after it rains is the best time to pull out weeds. So when I awoke this morning, I rushed outside in my bare feet to take advantage of the wet ground. Out there pulling weeds, got me wondering if the neighbors ever think, "There goes that crazy weed lady with the disheveled hair."

Earth mother that I am, I like to go barefoot to feel the ground under my feet. So I pick all of the sticker weeds - like the dreaded goat heads - before they go to seed.  (Especially seeking out those that disguise themselves with pretty yellow or purple flowers. They don't fool me!)

Sometimes, I'll be weeding along the property line, and I see some sticker weeds in my neighbor's yard. I'll just grab those too while I'm out there.  And that little one over there... Soon I'll end up picking all the weeds on that side of their house. I practice what I would say if the neighbor caught me pulling their weeds... "Just bein' neighborly, ma'am! You know...random acts of kindness...pay it forward...and all that." At least their stickers won't get tracked into my yard! And maybe, just maybe I won't get woken up at the break of dawn by a noisy weed-whacker!

I'll admit I drive Dan crazy by stopping to pull out a weed in a neighbor's right of way on our walk to the store. There are two benefits for me: to catch the sticker plants before they take over their whole yard and get tracked into mine while (hopefully) discouraging them from using weed killer in our neighborhood.

You might recall I had some run-ins with a certain landscaper who insists on spraying Roundup in our neighborhood. Remember this photo on facebook?

This guy said, "If the city can use it, so can we."  Then a member of the "landscape advisory committee" stood up at a city council meeting and asking them to spray pre-emergent on all of the city property before monsoon rains brought out more weeds.  That was the last straw! Even the Pima Department of Environmental Quality's G.I. manual states that herbicides seep into our ground water.  I wrote the mayor and my city council member urging them to stop spraying the ineffectual weed killer. The mayor forwarded my e-mail to an expert who agreed with my assessment. I've been placed on the landscape advisory e-mail list.

I wasn't always obsessed with weeds. Dan started it!  In an early blog, I expressed my shock when Dan weeded our overgrown garden only to turn around and cover it with Bermuda grass clippings!

Since then, we have successfully used Bermuda grass as mulch in our garden and around baby trees. No new Bermuda grass came up. I'll repeat that... No new Bermuda grass came up. Now I harvest Bermuda grass for mulch and compost! Bermuda grass is so abundant in our desert. Why shouldn't we put it to good use?  You just have to be sure to gather it before it goes to seed.
Speaking of crazy... I wonder what the neighbors thought of Dan out there in the heat of the day digging up Bermuda grass (a foot deep) to make a right of way catchment basin - and then purposely transplanting native grass into that basin! (This is actually a thing. The native grass works with the wood chip mulch as a sponge to keep the ground moist. Native plants also prevent erosion on the sides of the basin.) 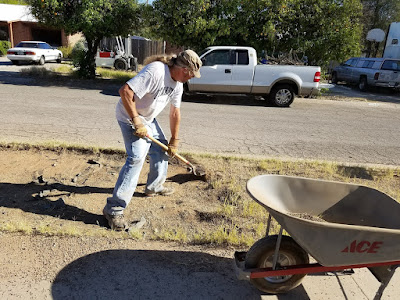 Last year, Dan looked on in dismay as I picked the Bermuda grass in the easement behind our house... and the neighbors' house. But there was method to my madness! I was making room for the edible weeds to come up. And it worked! We had an alleyway buffet of amaranth and purslane!

This year I posted a bigger sign, but so far there aren't as many edible weeds. Was it because of the slow, erratic monsoon season? Maybe the lizards are getting all the amaranth? Usually, purslane comes up after the second or third rain. Maybe it can't take the record heat either.

So... I've had to resort to finding my purslane elsewhere. I've been known to pull out weeds in front of the neighborhood steakhouse, so they won't start spraying poison on them. There were three huge patches of purslane under the downspout from their giant roof. One day I grabbed a big bunch on the way to the bus stop and put it into my reusable grocery bag. (Caution: stinging ants under the weeds.) Of course, it's always a good idea to ask the owner if they use weed killer. If you're not sure, you can still liberate that purslane and replant the roots in your own yard. That's how I got a nice row of purslane in my garden last summer. 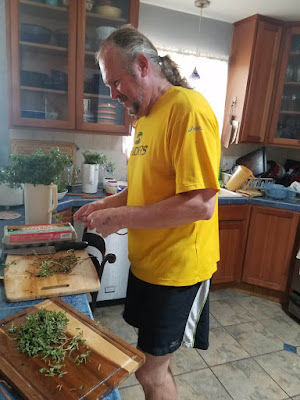 I have two pitchers full of purslane that I nibble on throughout the day.  During purslane season, I like to throw it into everything: soups, salads, scrambles, and sauces. (Well, everything starting with "s.") 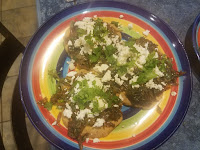 The other night, I used a big bunch to make one of my favorite purslane dishes: verdologas stew! YUM!

Scroll down the blogs on this link for more of my favorite purslane recipes.

So there are good weeds and bad weeds. I leave the good weeds where I want them and pull the bad.

I spent the better part of one summer trying to eradicate the Russian thistle from the alleyway and our garden.

This weed would climb up the fence and throw it's pink seeds into our garden.  Everyday I had to pull the tiny weeds out of the garden, making sure to get the whole root so it wouldn't come back. These were so invasive that I would pull them out in the easement behind other people's houses too - so they wouldn't spread back to my garden.

I was successful at getting rid of the Russian thistle. Here's a picture of that same spot last November. The ground was so rich from the decomposing weeds and leaves that we grew a 3 Sisters garden without any fertilizer - just a thin layer of wood chip mulch.


Remember my blog, "Are you a good weed or a bad weed?" Immediately after posting it, there was a rush of views. But viewership slowed way down once people realized that I wasn't talking about another infamous weed. Come on, guys! I'm not that kind of weed lady!

I'll bestow the virtues of edible weeds on anyone who will listen and even some who won't (much to the horror of my teenage son). Hey, they'll be glad to have that food security if we ever have an emergency where Mexico and California stop delivering us produce.

On the way home from the store yesterday, I noticed some amaranth growing in a neighbor's yard. I knocked on the door and asked if they were going to eat the edible weeds growing there. Because if they weren't, I could save them the effort of picking it by foraging it myself.

What common weeds have to offer the organic gardener and how to keep them from taking over
Posted by Jana Segal at 5:25 PM