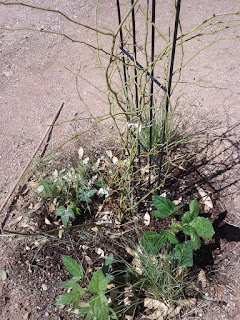 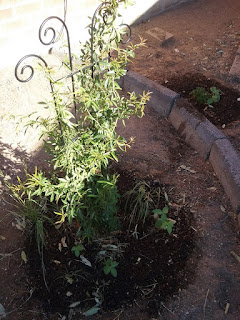 Our Tombstone rosebush was growing nicely. Then a few leaves went missing.  I love a mystery! I figured it must be lizards since I had seen what they did with the edible weeds and my startup squash.  Dan didn't think so. How could a lizard snip off the top branches? He thought it might be birds. Suggested that we get a surveillance camera to find out. But it was too late!  The next day they were all gone! 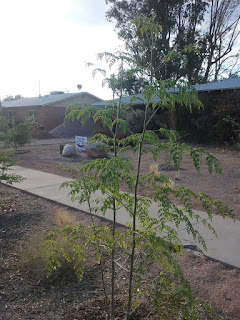 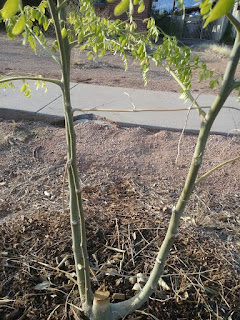 Then the cycle started with our biggest moringa! 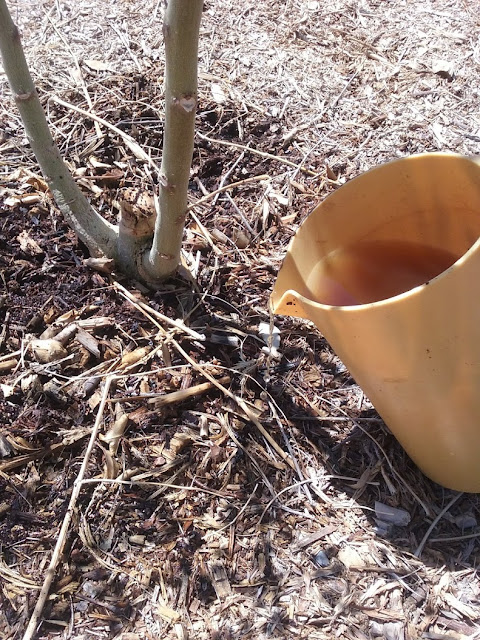 I saw a few ants climbing up the trunk so I poured some used coffee grounds around it as a deterrent. Unfortunately, most of it sank into the mulch. 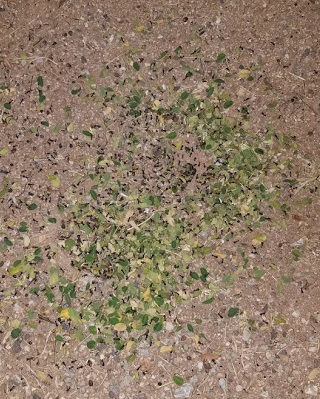 Later that night, Dan trained his flashlight on the sidewalk and spotted a trail of ants towing our precious moringa leaves towards this hole... Oh! So that's where all the leaves were going! 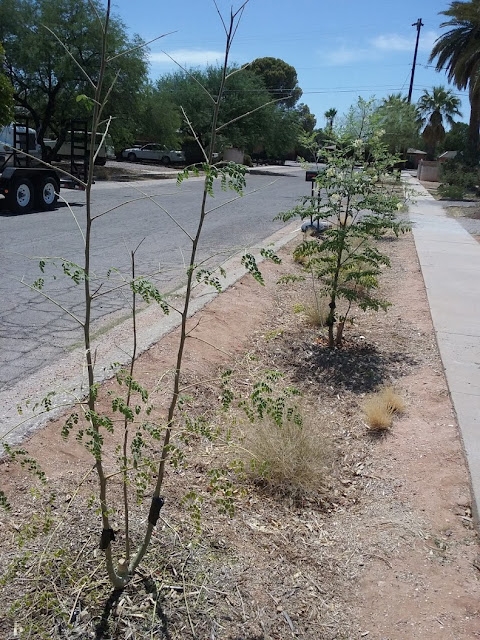 By the next morning most of the branches were bare. I saw tiny ants scurrying up and down the trunk and branches - ready to snip them off and drop them to their friends on the ground.

I had to work fast!  I did some quick research.  I discovered that some of the leaf eater ants cut the branches and let the leaves fall to the ground.  Then another group of ants carry them back to their hole.  That's exactly what was happening!  Last year I had some luck with cayenne pepper.  A very informative video mentioned mixing cayenne pepper with baby powder. But I didn't have either! Luckily the same video demonstrated a method they use in Guatemala. And it didn't involve any deadly chemicals!

After watching the video, I looked around the shed for a trash bag. We had long since stopped using plastic kitchen trash bags in the house. There were still two left. 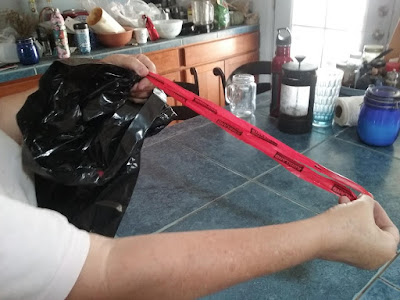 First, I pulled out the draw strap and cut it. 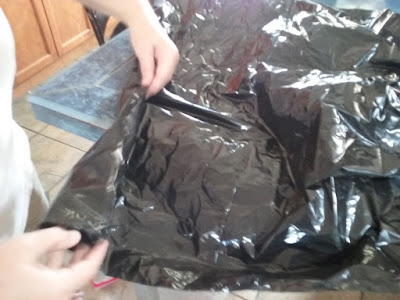 Next I rolled one end of the bag around two times the size of the moringa trunk. 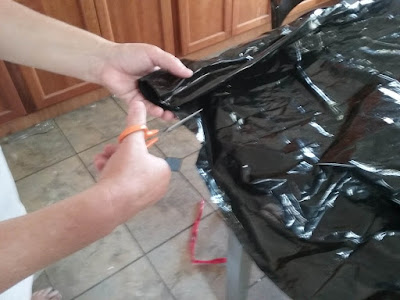 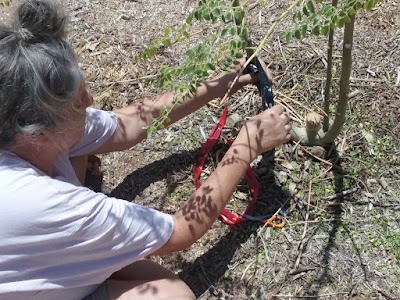 I wrapped it twice around the tree to test it. It was too big so I cut some off. 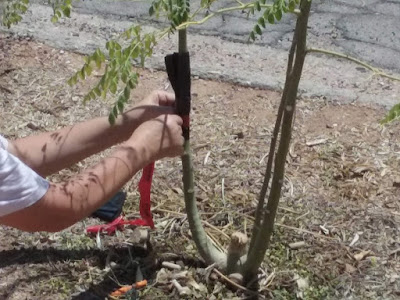 I tied the red draw string around the bottom (not so tight as to strangle the tree...) 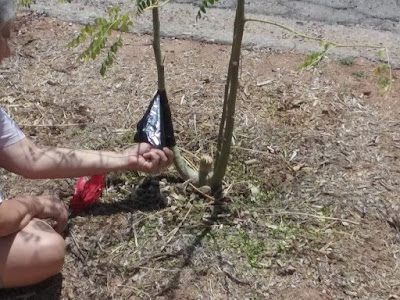 Then I pulled the plastic down, inverting it. It made sort of an upside down cone . The ants climb into the cone but can't get through. Be careful that the plastic on the sides doesn't touch the trunk of the tree or the ants will climb onto it.

I cut some more on the bottom to make sure it didn't touch the trunk. It was difficult because this plastic was much thinner than the plastic sheet in the video. (Did I say watch the video for better instructions?) 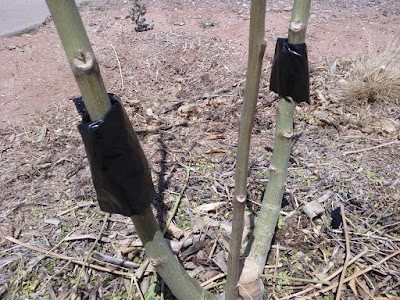 I made funnels on the two trunks coming up. It actually worked for a while. But the wind blew the thin plastic against the side of the trunk. If only we had sprung for heavy duty garbage bags!

*Note, these are old plastic bags left over from my first marriage. Now we use thin biodegradable bags that wouldn't work at all. Hmm... I wonder if the leftover piece of the recycled sign would work better...? 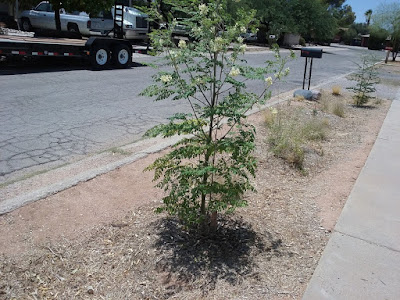 Then I looked over at the other moringa. We had great hopes for this moringa.  It already had flowers that we hoped would turn into yummy pods this year.  With closer inspection I found that there were ants climbing all over it.  I started pinching them between my fingers. On the ground below there were already some leaves and flowers! How dare they! I ran into the house to get another piece of plastic and sat on the edge of the mulch swarming with ants. As sweat dripped down my head, I pulled off some branches to make room for the protective cone. I wrapped the plastic around the tree as ants climbed up my leg and arms. I started squishing the ants above the cone with my bare hands, suffering from several ant bites. This was all out war! 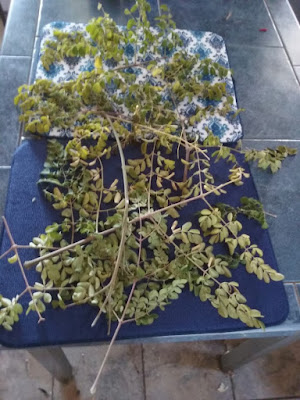 Later I brought the branches in the house. Those greedy ants weren't getting these! Over my itchy body! 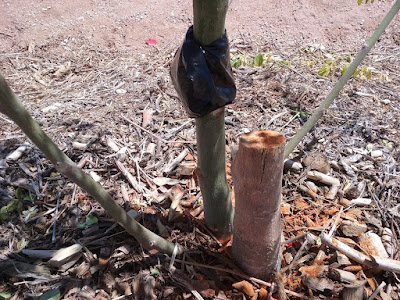 I got some cayenne pepper from the store and poured it all over the stump and surrounding mulch. 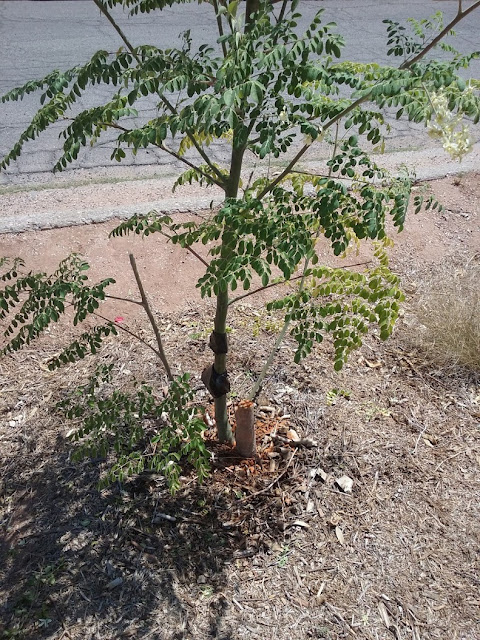 The next morning the trees were still there but there were ants climbing up the trunk and branches. Crafty creatures! 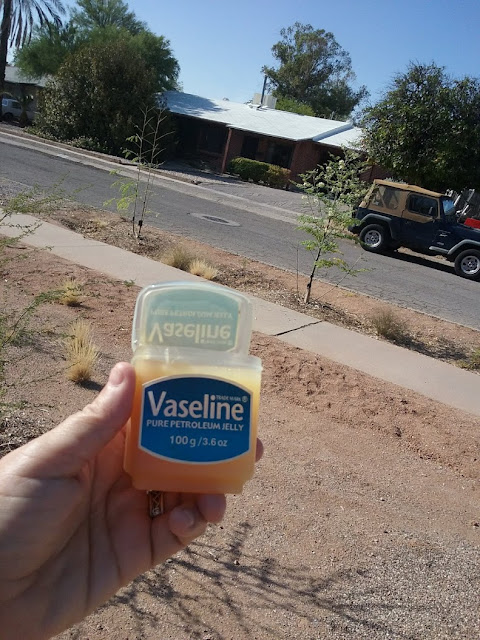 I went into the house to get some Vaseline. 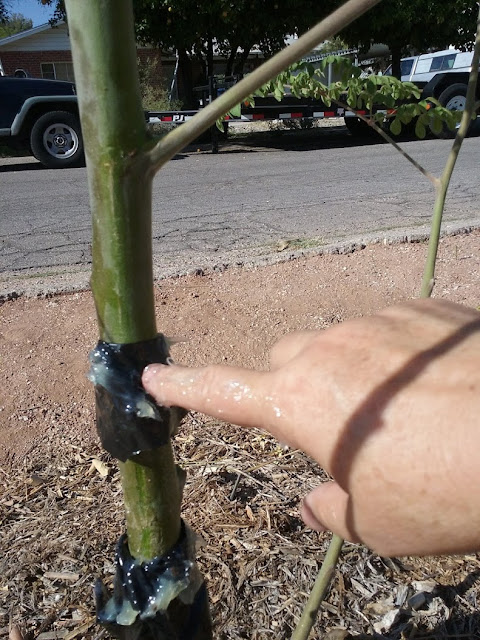 I put Vaseline on top of the plastic. 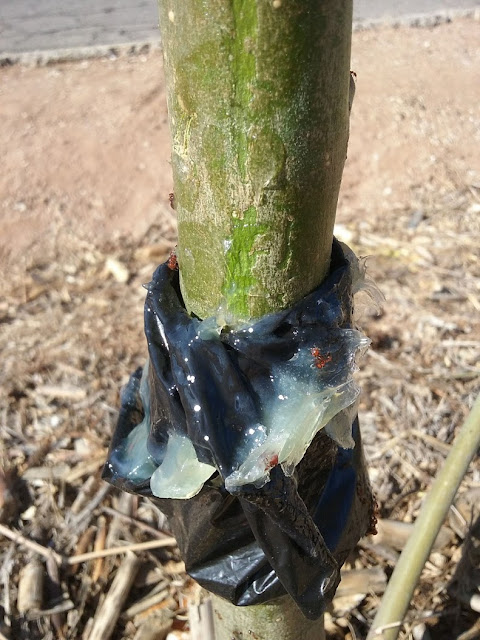 And it worked for a while...

Only later did I register the irony when Dan reminded me that it was "petroleum jelly." Argh! Should I try margarine? Ants avoid it at picnics... 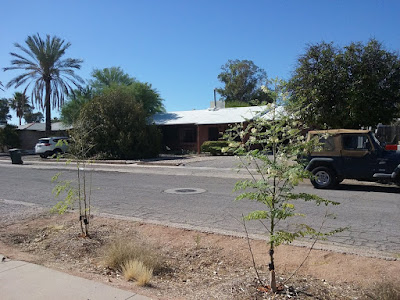 But these two moringas lived to see another day. 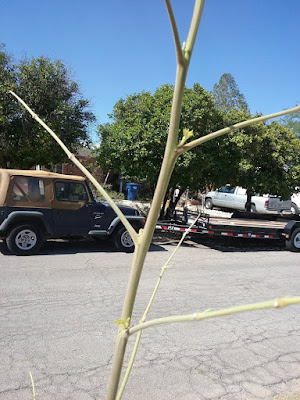 And some new branches sprouted from the nubs left on the leafless branches....

That didn't work. I'm so tired of fighting the ants. Today I found an ant hole at the base of the trunk. That is the last straw!

Got em! Until it rains at least! 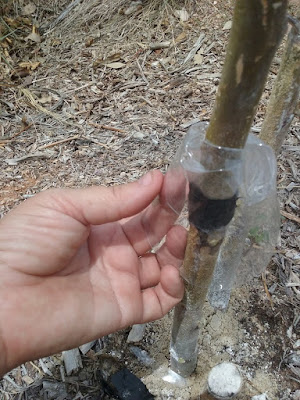 The idea of making a little "funnels" to keep the ants from climbing up the trunk was a good one. But the black plastic I used was too thin, so it leaned on the side of the trunk allowing the ants to climb up it. So I got some new thicker clear plastic from the big Ace Hardware store on Broadway, and made a new funnel. This worked great. My moringa trees grew tall with lots of new leaves thanks to this method!

*by way of full disclosure... the Vaseline, soap water, and Diatomaceous earth that I applied on the tree itself wounded my poor moringas.
UPDATE May 26, 2021

I've been using a method that I learned from Spadefoot Nursery. I fill up the ant hole with mud and gravel when I see the ants come out. Eventually they seem to go away.  When I see them heading for the moringa, I put corn meal along their trail to the trees. That at least slows them down. If that doesn't work, I go ahead and harvest the leaves off the tree.

Information on natural methods to get rid of ants:

How To Get Rid Of Ants: Homemade, Natural Ways To Stop An Infestation

I've been able to get my moringa to come back by mitigating the leaf cutter ants before they get to my trees.  If I see ants coming out of the hole, I put cornmeal by the whole. I've also observed that the ants like to come out after the rain. So as soon as it stops, I put cornmeal around the trees.
Posted by Jana Segal at 10:24 PM