Movies for a New Year's Revolution 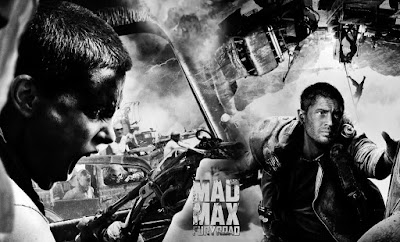 I considered making a list of heartwarming, feel good movies to help us get through the pre-dystopian blues (and you can certainly find them here.) But after a month of that kind of distraction, I feel it’s time to move on. If you’re ready for a change too, this list might be just what you need – Movies for a Revolution.

If you’re like me, the best remedy is doing something about it. These movies leave you with a feeling of hope. President Snow (of Hunger Games ) warned us about hope, “A little is good. A lot is dangerous” – because it can ignite a revolution. Right now our country could use a lot of hope. If you’re ready to see things blown up, these films provide the arsenal. But if you’re ready for a revolution - at least a revolution of the heart – allow these films to ignite the force in you and prepare you for the work ahead.

One way to get prepared is to arm yourself with the facts of what is going on in our world.

1) In The Hunger Games series, we observe how the government controls the people through the corporate owned media. They instill fear and divide the people of the 12 districts by having them fight each other in the hunger games. Meanwhile, the citizens of the Capital live in gluttony by exploiting the resources and labor of the 12 districts, while the working class struggles to get enough to eat.

America’s corporate-owned media planted fear in us that made us ripe for a populist demagogue. They did that by broadcasting a stream of violent images of terrorist acts, drug cartel wars, and every conceivable crime done by a Mexican or person of color. They used illegal immigrants as scapegoats, blaming them for our lack of jobs, while the CEOs got million dollar bonuses for sending our manufacturing jobs overseas to exploit cheap (sometimes slave) labor. We need to heed Peta’s advice and “Remember who the real enemy is,” so we are fighting the right battle. Katniss shows us that our strength lies in unity and love.

2) Like I wrote in my previous review, “Mad Max: Fury Road” is the ultimate action flick - a total adrenaline rush of continual action, one long explosive car chase. It is a practical effect picture. Everything you see on the screen is real. Real people driving those trucks, real trucks rolling over and crashing in the Libyan desert. The production had military advisers for the battles. 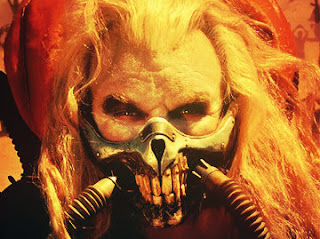 This prophetic action movie briefs us on the consequences of pursuing profit over the common good. The barren wasteland resembles the scarred land that mining companies leave behind. Our country is at the cusp of a dystopian system where greedy corporations will have complete control over the one thing we all need to survive – water. The first steps have already been taken. Nestle bottled up California’s water during a severe drought. They are now bottling what’s left of the clean water in Michigan to sell to the people of Flint whose water was poisoned by corporate meddling. Nestle is currently setting up operations in drought-ridden Phoenix to bottle Arizona’s CAP water (water that was transported 320 miles from Colorado at a great environmental cost) so they can sell our own water back to us. The chairman of Nestle, Peter Brabeck-Letmathe, told his board that water isn’t a human right, that it should be privatized. As fossil fuel companies continue to deplete our water supply to extract coal and gas, they are creating a water shortage. Some countries are already in the midst of water wars like those in Mad Max. Imagine having to rely on greedy corporations to divvy out our drinking water.


Every-man Max and the young War Boy Nux learn from the mothers what is really worth fighting for: fair distribution of water and a future for their children where their sons aren’t raised as fodder for old men’s wars. The movie demonstrates how to get our warriors to fight for what is right – by showing empathy for their suffering and uniting with them over "righteous causes."

The movie inspires us to plant the seeds of change in our communities. The shot of the matriarch unwrapping the heritage seeds is a great visual metaphor for planting the seeds of a more sustainable way. Change is fostered by demonstrating successful practices - much like the water-harvesting systems initiated by Brad Lancaster. (Look him up. He didn’t win the local genius award for nothing.) Curb cuts (that irrigate street-side trees) used to be illegal in Tucson. Now water-harvesting features are required at new apartment complexes. As Nux says, "It looks like hope."

3) Rogue One: A Star Wars Story casts a laser beam on how a small group of dedicated people can make a big difference when the Force (I’ll call it love) is with them. It shows how taking a risk to do the right thing can inspire others to follow suit. Revolutions are built on hope!

A real-life example is the Water Protectors at Standing Rock. The peaceful Water Protectors are putting their lives on the line to stand up to Energy Transfer Partners' (Sunoco) attempts to build an oil pipeline under the Missouri River that supplies water to 17 million Americans.  (Look it up. These pipelines explode and leak all the time...) A small group of matriarchs from the Standing Rock Sioux tribe started this prayerful, non-violent action out of love for their children and Mother Earth. Despite sparse media coverage, over 300 indigenous tribes joined them. After watching drone footage of police brutally attacking unarmed protesters, two thousand vets deployed to Standing Rock to defend them and our water. Thanks to the Water Protectors the permit to drill under the Missouri River has been denied. That is the hope I was writing about! But it's not too late to join the fight. Trump signed an executive order to restart the pipeline, so the fight continues. 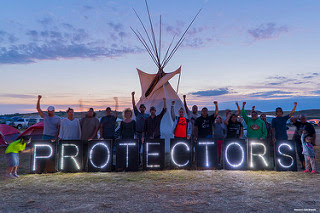 Hopefully these Sci Fi flicks will inspire the peaceful warriors in us all to take up the good fight, even if that just means trying to live a more sustainable lifestyle: not buying bottled water, bringing reusable shopping bags to the store, being mindful of water use, driving less, buying local, keeping up with what is happening in our government, signing petitions, and pulling money out of banks that support the pipeline... To quote Yoda, “Do. Or do not. There is no try.” (Sorry, that’s another movie.)

I would greatly recommend The Hunger Games, The Hunger Games: Catching Fire, Mad Max: Fury Road, and Rogue One: A Star Wars Story for an inspiring New Year's marathon. Wishing you a Happy New Year full of hope and love.


If you would like to read more about my adventures in transitioning to a more sustainable lifestyle, scroll down this blog: http://www.sustainablelivingtucson.org/
Posted by Jana Segal at 10:41 AM