Sharing in the Bounty of Community Supported Agriculture

One aspect of sustainable living we try to incorporate into our daily routine is eating more local produce. It's good for the enviroment and so much healthier. The more recently the veggies have been harvested, the more vitamins they retain. We also like to know how they've been grown.

But I soon discovered it's not easy to find local produce in Tucson. While doing research for my blog Food Security in the Desert, I learned that only 1% of the produce at our neighborhood grocery store, Sprouts, was grown in Arizona. It is difficult for local farmers to compete with conveniently located supermarkets that carry a wide diversity of affordable crops year around.  But there is a bigger cost to consider. Imagine the carbon foot print of transporting all that produce hundreds of miles from Mexico or California or shipping it across the ocean. Thousands of pounds of damaged produce is thrown into landfills every day while poverty stricken farm workers can't afford to eat the produce they harvest.

Sadly, Dan and I have been unable to swing shopping at the weekly farmers markets (often held on the other end of town). So when we heard that Sleeping Frog Farms would be delivering fresh produce to the nearby WMG office through their CSA (Community Supported Agriculture) program, we happily signed on. We knew we wanted to help support a local (Benson) farmer make a consistent living, but we really didn't know what to expect. We pre-paid $300 for a share of their weekly crops for a season ($25 a week.)  But we weren't sure that we would be able to use the seasonal produce.

That first Wednesday, I excitedly toted my reusable cowgirl bag to pick up our share. I was surprised that there were seven nice bunches of veggies! Curly kale, chioddia beets, carrots, burgundy colored chard, cilantro, kohlrabi (what's that?), and arugula. This was our chance to try some healthy greens (yikes!) and even some weird veggies we had never heard of. 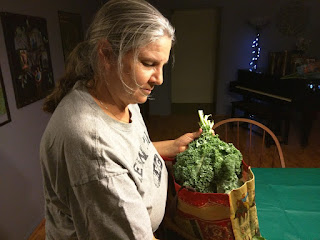 Oh, no... Not curly kale! Dan was the only one who would eat it out of our own garden! 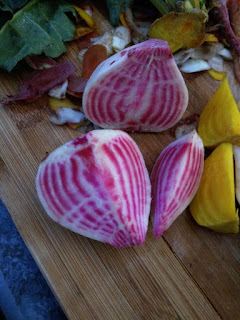 We were delighted to see beets included in our weekly offerings. Roasted beets are a family favorite! When we cut into them there was a cool surprise: pink stripes!

With rushing off to several meetings and screenings a week, how would we find the time to prepare all of these vegetables? We certainly didn't want to waste any. (One goal of sustainable living is to reduce waste...) We decided we would have to serve 2 or 3 veggies at dinner each night to get through them all. That would be some feat since we rarely manage the 3-5 vegetables the USDA recommends a day... 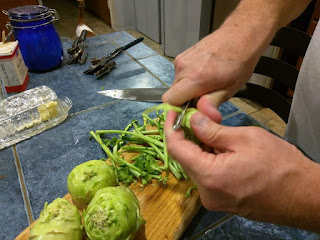 We didn't know what to do with all of the veggies. What is this strange alien plant kohlrabi?  But one of the benefits of being in a CSA, is that you can get cooking advice from the other members when they pick up their share. One guy suggested that we peel the kohlrabi like broccoli (you don't peal broccoli, do you?) and steam them. Dan googled kohlrabi. (Google is Dan's best friend.) It is also known as a German turnip or turnip cabbage. We're kinda roastin' fools, soooo...


Wednesday rolled around again, so I checked to see what foods hadn't been eaten... 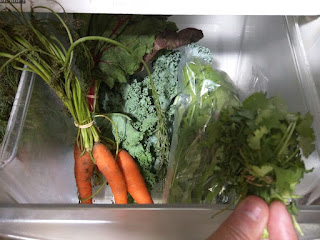 Argh!  Despite our best efforts all this was left in the so-called "crisper."

Our second pickup at the CSA 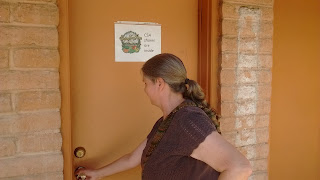 When I bemoaned the wilted veggies from the first share, a young man suggested that we eat perishables first in a salad. I told him how there was still kale left even after Dan had a big plate of it. They suggested that we bake up some yummy kale chips.

Determined to keep those veggies from the compost pit, we decided we would eat several that night. We noticed the chard that had reseeded itself in our garden was starting to wilt too. We added it to the menu. 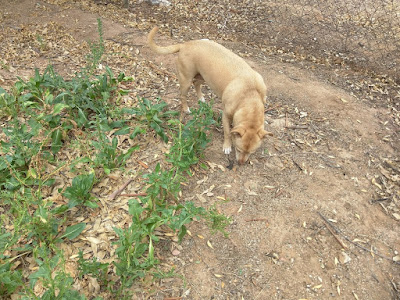 I also picked some fresh parsley from our garden to liven up our quinoa. We had steamed chard; quinoa with leaks, onions, and parsley; roasted carrots; and beets topped with feta. The USDA would be proud!

We decided to dry the wilted cilantro... 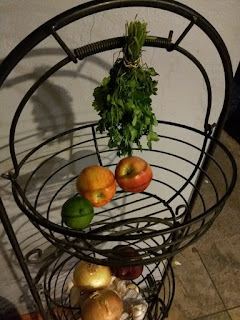 We learned to add steamed greens to any meal. (And we liked it!) We added leeks to pasta with leftover salmon for an easy dinner. And baked up some yummy kale chips. My teen not only tried them, but tried to steal the whole bowl! 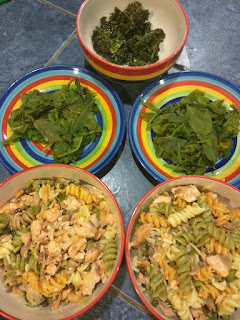 Best way to get your teen on board with the veggies - add them to potato-leek soup with fresh dill in a bread-bowl topped with lots o' cheez and green onions (also from CSA!) 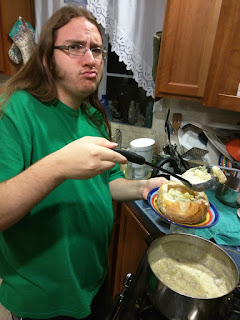 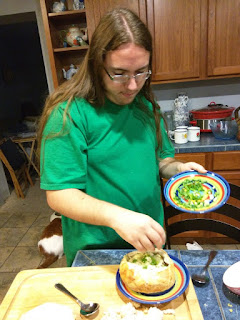 Having a share in Sleeping Frog Farm's CSA, encouraged us to try new foods, grow to love kale, be creative, and eat healthier.
Posted by Jana Segal at 12:15 PM